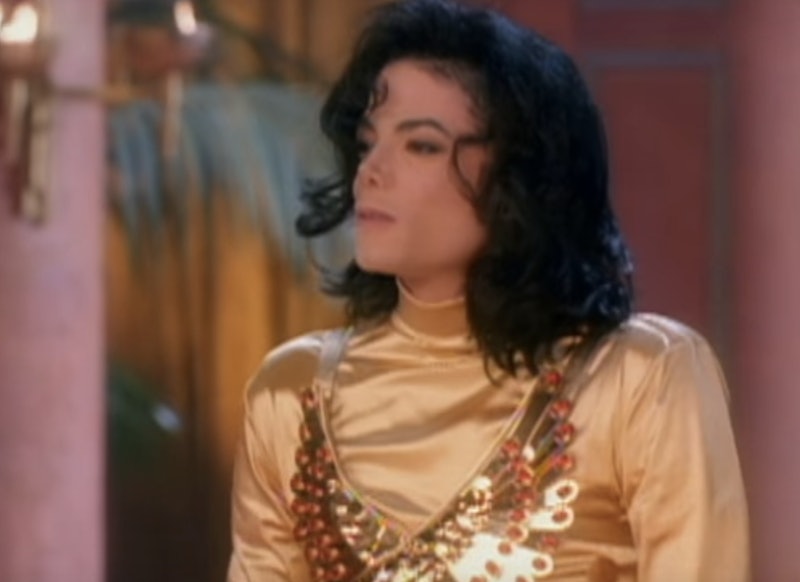 Monday marks what would have been Michael Jackson's 58th birthday, and, although the singer passed away in 2009, his music serves as an impressive legacy. When it came to making music videos for his singles, Jackson was a real innovator. Many of his music videos were short films, or featured award-winning actors and incredible special effects. As an artist, there's no doubt that Jackson was way ahead of his time, and he really helped to pioneer the music video as an art form all of its own. Which is why, in my opinion, "Remember The Time" is the one Michael Jackson video you should watch immediately.

"Remember The Time" came out in 1992, and was released as the second single from Jackson's album Dangerous (which was the singer's eighth!). Co-written by Jackson, the song is about remembering a past relationship, and trying to recreate that romance via memory. I loved the song as soon as I heard it way back in the '90s, with its dance sound and romantic lyrics, but it's the music video that really demands everyone's attention. Of course, there's a killer dance sequence, because it wouldn't be a Michael Jackson video otherwise. But it also features an all-star cast, amazing costumes, and a believable love story. Please watch it, like, now.

The video is set in Ancient Egypt, meaning that the set is incredible, and Jackson's outfit in particular is unforgettable. Wearing a gold top and a beautiful sheer sarong, the singer appears in front of the Pharaoh and his wife. But this is not just any Pharaoh — it's Eddie Murphy. And his wife? Only the world-famous model Iman. From the onset, "Remember The Time" has an attractive cast, and it's impossible not to want to devour the entire video at once.

The music video was directed by John Singleton, a film director most well-known for his work on Boyz n the Hood , for which he was nominated for two Oscars — Best Director and Best Original Screenplay. "Remember The Time" definitely has short-film aspirations, and, at more than nine minutes long, and featuring so many amazing actors, it's no wonder that it's so memorable.

There are so many Michael Jackson music videos that are worth revisiting, but "Remember The Time" is easily my favorite. The chemistry between Jackson and Iman is great, the group dance sequence is so satisfying to watch, and Eddie Murphy takes his role so seriously. It's really a joy to watch when I feel like shedding tears over the legend that the world has lost.