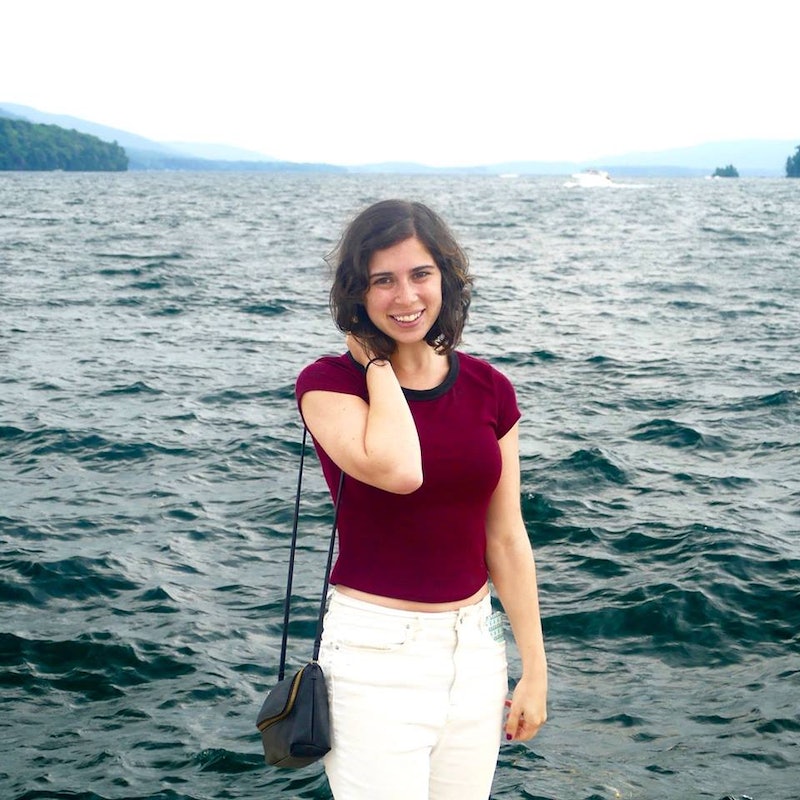 For as long as I can remember, I've looked younger than I am. When I was 13, I was still getting kids' menus; by the end of high school, I barely looked out of puberty; during college, more than one person thought I was not a student, but someone's younger sibling. It's a combination of a baby face and a small frame, and until recently, this rarely seemed like a bad thing. Despite the annoyance of no bar bouncer ever believing my ID is real, it's hard to complain about looking young when I know my middle-aged self will one day be savoring the compliments (although that's problematic in and of itself).

Yet over the past few years, I've started to view looking younger not as a perk, but a detriment — because when I conduct interviews as a film journalist, the first reaction many female actors or filmmakers often have upon seeing me isn't, "Nice to meet you," but, "Oh, you're so cute!" It's a phrase that, intentional or not, comes off as incredibly condescending.

When I walk into an interview, I'm fully aware that I'm probably younger than the person I'm about to speak with is expecting me to be. I'm 22, a year out of college. That fact, combined with my young looks and tendency to avoid heels whenever possible (I'm clumsy, OK?), is often startling to people anticipating a weathered journalist with a decade of work under her belt.

In many instances, my appearance at an interview is met with raised eyebrows, but nothing more; people register my age with slight surprise, but quickly move on and speak to me as they would to any journalist. This is the reaction I prefer, and that I'm glad to say I get most often. I obviously can't avoid people thinking that I'm younger than I am, but I appreciate them not letting their surprise affect the way they act during our interview.

Yet sometimes, more often than I'd like, I get a different reaction. I walk into an interview, and the subject's eyes widen when she — it's always been a woman — sees me. As I shake her hand and introduce myself, she breaks into laughter and says something like, "Wow, you're adorable!" or, "Oh my god, how old are you?" I laugh politely, and make a lighthearted comment about my age: "I know, I look really young," or, "I'm older than I look, I swear." Sometimes, the interview goes normally from there, but other times, the person won't let it go. "Are you out of college?" "When did you get your job?" "Aw, wow, this really is so cute."

These comments may be well-meaning — the people saying them seem impressed that I've managed to become a journalist for a reputable outlet at such a young age — but they're nonetheless frustrating to hear. Of course, they also happen in my everyday life, in stores and on the street, but as a woman living in a city, I've become mostly immune; it's during interviews that it really bothers me, because that's when I'm doing my job.

What frustrates me most about this is that, in my experience, it's only women who've had this attitude towards me ... several times now, female celebrities have loudly proclaimed their shock over my age, or made me list my college graduating year before starting an interview.

When I go into an interview, I'm taking it seriously; I've done extensive research and prepped many questions in order to conduct an interesting, well-informed chat. I may be and look younger than many of my peers in the industry, but that doesn't mean I'm not putting equal effort into my interviews and wanting my work to be read and respected. When I speak to an actor or filmmaker, I'm hoping to have them be intrigued by my questions and thinking hard about their responses. The last thing I want is for them to dismiss me the moment I walk in the door.

Yet, all too often, it seems like that's exactly what happens. When my interview subjects open our chat by commenting on how "cute" it is that I'm the person speaking to them, it feels like they're viewing me as a young girl, not a journalist. It doesn't seem to matter that I'm representing a popular website, or that I've interviewed dozens of celebrities before. In their eyes, I'm basically a kid dressed up as a reporter. I see the effects once the interview begins; the subjects, still in the "Isn't this adorable?" mentality, give big smiles and lighthearted responses that don't subside until the interview is several questions in. If the interview's long enough, they eventually move past their surprise and act as they would normally, but in short chats, where you're only given a few minutes with a subject, I don't know if they ever do.

What frustrates me most about this is that, in my experience, it's only women who've had this attitude towards me. If male actors and directors have been surprised by my age and young look, they haven't shown it; they've been polite and respectful, and have acted as I'd presume they would've in an interview with someone older than I am. Yet, several times now, female celebrities have loudly proclaimed their shock over my age, or made me list my college graduating year before starting an interview. Perhaps it's because men, especially those in a public light, have become more aware that commenting on a female journalist's looks is wrong, while women don't consider themselves part of the problem. They're not being sexist or pushing boundaries by noting a reporter's young appearance, they might think; why would that even be an issue?

Yet it is one. It's already hard enough for women to get ahead in journalism (or any industry, for that matter). When I interview an older, successful, woman — someone who, likely, was once in the position I'm in — and have her start our conversation with a comment that implies my work is "cute," it's not just irritating. It's disrespectful.

It's not that these actors and filmmakers aren't supportive of other women. In fact, all of the women who've made "cute"-like comments to me are ones I admire for making hugely feminist work and standing up for their beliefs. In other interviews, they've made it clear that they care about the success of other women, and I'm sure that they'd never intentionally be dismissive or condescending towards a woman at the beginning of her career. Yet by focusing on my age and letting it impact how they speak to me during our interviews, that's exactly what they're doing.

And it's not just actors or filmmakers. Often, when I meet a female publicist or a studio representative in person for the first time, she expresses surprise at my age and starts adding "sweetie" into conversation, despite the fact that up until then we've had a perfectly professional relationship over email. I've heard similarly baby-faced co-workers complain about being called "honey" in meetings with other women. For many women, it seems that these expressions come naturally and are perhaps even meant as a friendly form of endearment — but for the young-looking women on the receiving end, it's incredibly frustrating to hear.

Women have it hard enough being taken seriously by men and society as a whole; we can't afford to not take each other seriously, too. Comments about my age might not be meant with malice, but they take away from my credibility as a journalist, and the respect I deserve to earn. I don't want to be seen as "cute." I want to be viewed as competent.

More like this
25 Inspiring Quotes From Black Women To Celebrate Black History Month
By Kyli Rodriguez-Cayro and JR Thorpe
24 History-Making Black Women You Probably Didn't Learn About In School
By Ayana Lage and JR Thorpe
Twitter Is Identifying With Sally Field & Jane Fonda’s Friendship In New Viral Video
By Jake Viswanath
"Lavender Haze" Star Laith Ashley Breaks Down Filming With Taylor Swift
By Jake Viswanath
Get Even More From Bustle — Sign Up For The Newsletter
From hair trends to relationship advice, our daily newsletter has everything you need to sound like a person who’s on TikTok, even if you aren’t.