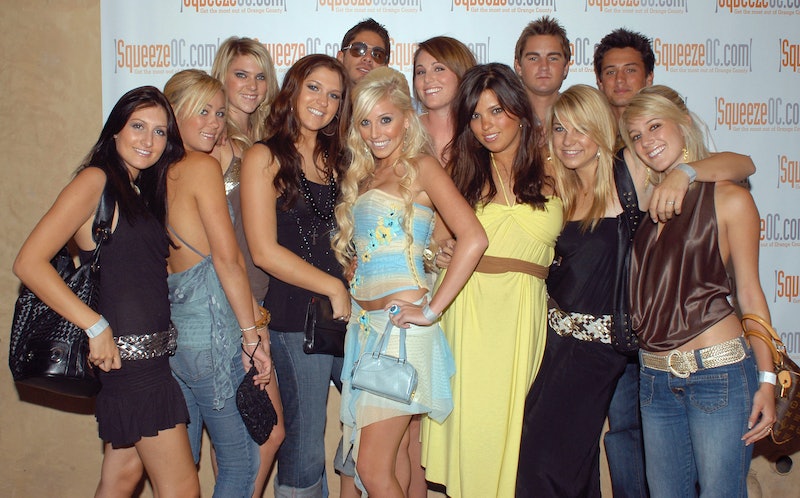 It seems like so long ago we were all sitting on our couches, avoiding homework and instead focusing on the drama in the lives of the Laguna Beach cast members. Well, the popular MTV series has ended and the drama is over — but the members of the Laguna Beach cast are still hanging out drama-free. Or, at least, now when there's drama, it's the good kind, like the wedding of former cast member Dieter Schmitz. And not the bad kind with hair-pulling and stern side-eye.

According to Entertainment Weekly, Schmitz, a Laguna Beach cast regular, tied the knot with his fiancé, Isabell Hiebel at a beachside ceremony on Sunday, August 28 while the rest of us were watching the MTV Video Music Awards. Schmitz's co-stars, Lauren Conrad, Trey Phillips, Stephen Colletti, and Loren Polster were in attendance with Phillips and Colletti even participating as groomsmen. On the show, Schmitz was often seen with Phillips and Colletti, and even dated their friend, Jessica Smith for a spell.

It's nice that, even though a decade has passed (yikes! Where does the time go?), and the cameras are gone, the crew can all still get together and have a great time celebrating something as lovely as an old friend's wedding

Trey Phillips shared an image showcasing his and Colletti's groomsmen status. The blue ocean behind the groomsmen is the only thing that stands to remind us all that this crew used to deal with teenage-styled quibbles in their beach town home of Laguna Beach.

E! reports that the two are headed off on their honeymoon in Bali, Australia, and Hong Kong which is definitely #relationshipgoals. But the congrats aren't just in order for the couple; let's throw some congratulations over to the

pals of Laguna Beach for still being friends. Though the crew has all gone in different directions, they can still come together to support, and that is a beautiful thing to see. Long-lasting friendships are something we can all get behind on and off-camera.