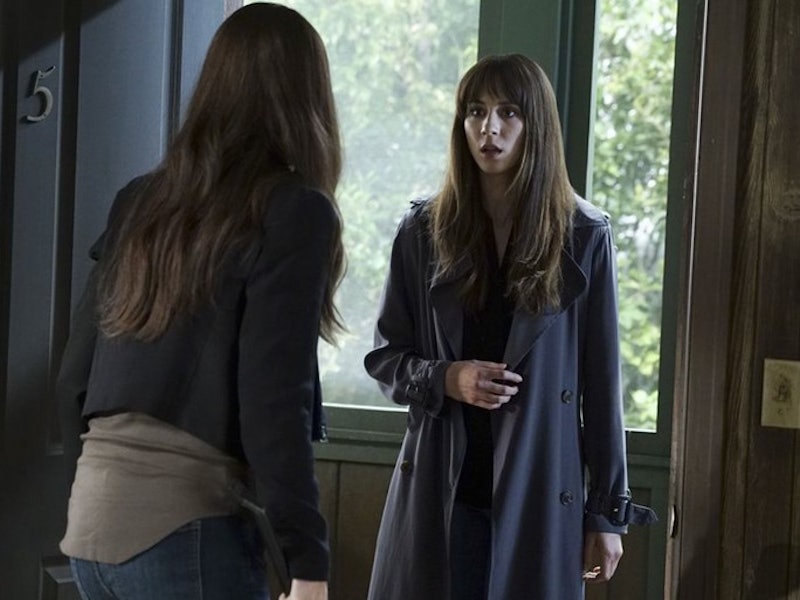 The word safe is kind of a loose term on a show like Pretty Little Liars. Because when you really stop and think about it, no character is ever really "safe." There may not be zombies around like on The Walking Dead, but life in Rosewood poses just as big of a threat because your enemies are hidden among you rather than out in plain sight. And now that the Pretty Little Liars Season 7A finale is just around the corner, it's time to start preparing ourselves for what lies ahead... death. According to the episode synopsis, someone is going to die by the end of the hour. The only question is who. Based on the promo, which shows Jenna with a gun in her hand, all of the Liars seem to be in equally great danger, but I am starting to have a sneaking suspicion that Spencer could die in the PLL finale.

Now that Hanna is holding Noel hostage, there are bound to be some serious repercussions, especially given that he escapes and has a gun-wielding Jenna on his side. (A deadly combination if there ever was one.) And I can't help but notice that she is at the very front of the group in the promo as Jenna edges closer and closer to them. This could mean that she'd be the one most likely to get hit should the gun go off. Plus, I wouldn't put it past Spencer to willingly take a bullet for those she loves.

Then there's the fact that the finale clip also shows Spencer and Toby sharing a kiss. As happy as that image originally made me, I'm now concerned that it's going to serve as a permanent goodbye for one of these two characters. Granted, this could mean that Toby is in just as much danger as Spencer, which is a terrifying notion. But when you pile all the clues together, Spencer could be the more likely target, considering her involvement with the whole A.D. storyline.

Now, I know what some of you are probably thinking: "Spencer's voice is the one we hear in the promo, asking 'What did you do?' So she can't be the one that gets fatally injured." True, that does sound like Spencer in the background, however, she could be referring to something else entirely. Don't forget that these promos are put together in an attempt to throw us off. So the fact that we hear her voice specifically doesn't automatically make her safe.

Spencer has always been a go-getter when it comes to investigating who's behind these terrifying threats. Taking her down may be A.D.'s way of making sure he or she isn't discovered for a long time. The thought of losing her is almost too devastating to bear, but emotional torture is what PLL is best at and this could end up being the most unforgettable finale to date.