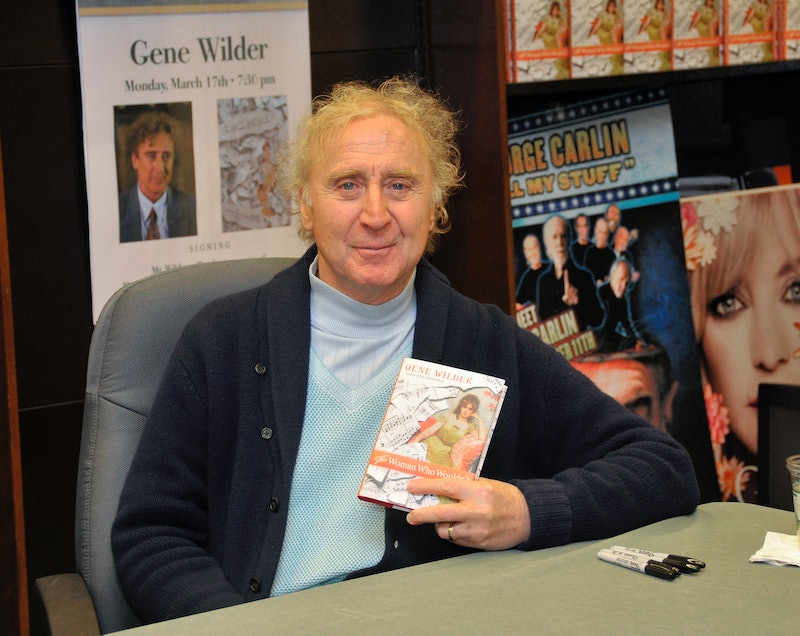 It was incredibly sad to find out that legendary actor Gene Wilder had passed away, at the age of 83. The actor's work featured heavily in my childhood, especially his performance in 1971's Willy Wonka And The Chocolate Factory, which was perhaps his most iconic role. Needless to say, Wilder's work will continue to be appreciated for decades to come, as he truly left his mark on the entertainment industry in classics like The Producers, Young Frankenstein, and Everything You Always Wanted to Know About Sex* (*But Were Afraid to Ask). So why did Gene Wilder stop acting? He actually hadn't starred in a movie since 1991, and his most recent television performance was in an episode of Will & Grace in 2003 — 13 years ago.

Despite being instantly recognizable, Wilder had taken a step back from his acting career in recent years. On June 12, 2013, Wilder gave an enlightening interview to Turner Classic Movies at the 92nd Street Y. During the talk, the actor revealed that finding the right role was important to him. "If something comes along that’s really good and I think I would be good for it, I’d be happy to do it. But not too many came along," he said.

For Wilder, it was about finding the right fit, and choosing roles he could do justice to. It seems as though the performer wasn't concerned with money, but with making movies that would complement his body of work.

He was wooed back to acting with his recurring role as Dr. Stein on Will & Grace , for which he won an Emmy in 2003. But, aside from this performance, the former Willy Wonka was content in his new career as an author. Wilder wrote several books, including novels and non-fiction, and seemed to relish his role as a writer. Speaking to BookPage in 2005 about his memoir Kiss Me Like A Stranger: My Search For Art And Love, he said, "Writing the book was, in itself, a kind of therapy. I thought I'd go crazy if I didn't have something artistic to do... it just started pouring out."

Clearly, Wilder expressed his creativity in many forms, and writing gradually took the place of acting for him. While his presence will be greatly missed on screen, he was obviously a man of many talents who wasn't afraid to express himself. He may have stopped acting to pursue writing, but his previous roles continue to inspire audiences everywhere.

Speaking to Turner Classic Movie in 2013, Wilder said he's been put off filmmaking due to changing aesthetics and script content, and said, "I didn’t want to do the kind of junk I was seeing. I didn’t want to do 3D, for instance. I didn’t want to do ones where it’s just bombing and loud and swearing." The iconic comedian was careful in his career choices, which is no bad thing. It means that Gene Wilder's legacy will live on, showcasing the very best work that he did. He will be greatly missed.