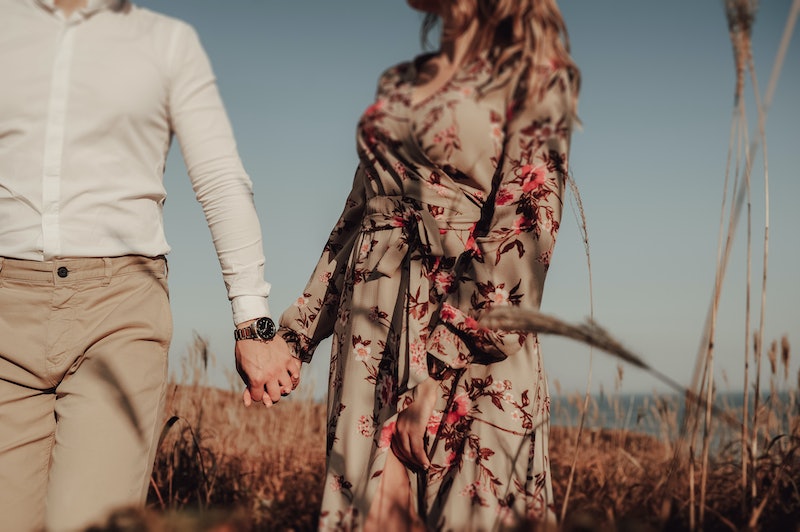 For centuries, marriage was about shoring up property, securing family ties, and producing offspring. Women gave up their individual rights as soon as they took on a husband, and by law had to obey his every command. When it comes to millennials and marriage, however, the rules have changed completely.

Tying the knot in the 21st century is rarely about connecting the wealth of two families and creating an empire (although it can be). Women don't become the legal property of their husbands and don't lose their individual rights either, (although unfortunately, it might feel that way for some), and children, monogamy, and even living together are not required. Still, with all those caveats in there, it can seem like the institution hasn't developed all that much since the olden days — save for the premium we put on romantic love.

So how, exactly, do folks ages 18-34 view marriage? As millennials get older, they're creating their own unique marital trends which reveal a lot about the generation known (for better or for worse) by deep rooted digital connectivity, self-awareness/self-centeredness, and independence.

Here are five facts about millennials and marriage:

1. The Average Age Of Marriage Has Increased

The marriage rates for highly educated women have increased steadily over the past 25 years. Interestingly, as the rates for high school educated women drop, those for women who have attended graduate school, law school, or medical school increase. The reasons are unclear, but economic factors definitely seem to play a part, as those who are more educated tend to make more money and thus have more financial security to offer a partnership.

Millennials aren't yet feeling the burning desire to get married to the extent other generations have, which is in some part tied to the economy. In an uncertain market, more folks in their 20s and early 30s are focusing on securing their education or career instead of a partner — or may not be interested in the institution at all. As of 2014 research from Pew demographics, 26 percent of millennials were married, although 69 percent said they would like to be married one day.

4. Divorce Rates Are Declining, Too

Marriage rates for millennials may be declining, but divorce rates are, too. As this generation waits longer to get married, divorces are becoming less common. Statistics show that those who live with a partner first can ease into marriage with greater success. Marriages which once might have ended in divorce now more often end in a simple breakup, because folks are waiting longer before making it "official."

5. Alternatives To Marriage Are Becoming Popular

In most parts of the country, it's no longer a scandal to live with a partner before you're legally married or to have a child with someone to whom you're not married. This makes marriage less of a desirable option if you can fulfill your love and procreation goals without committing on paper. In addition, consensually non-monogamous relationships are on the rise among millennials, so marriage isn't always on the table if you're in a serious relationships with multiple people.