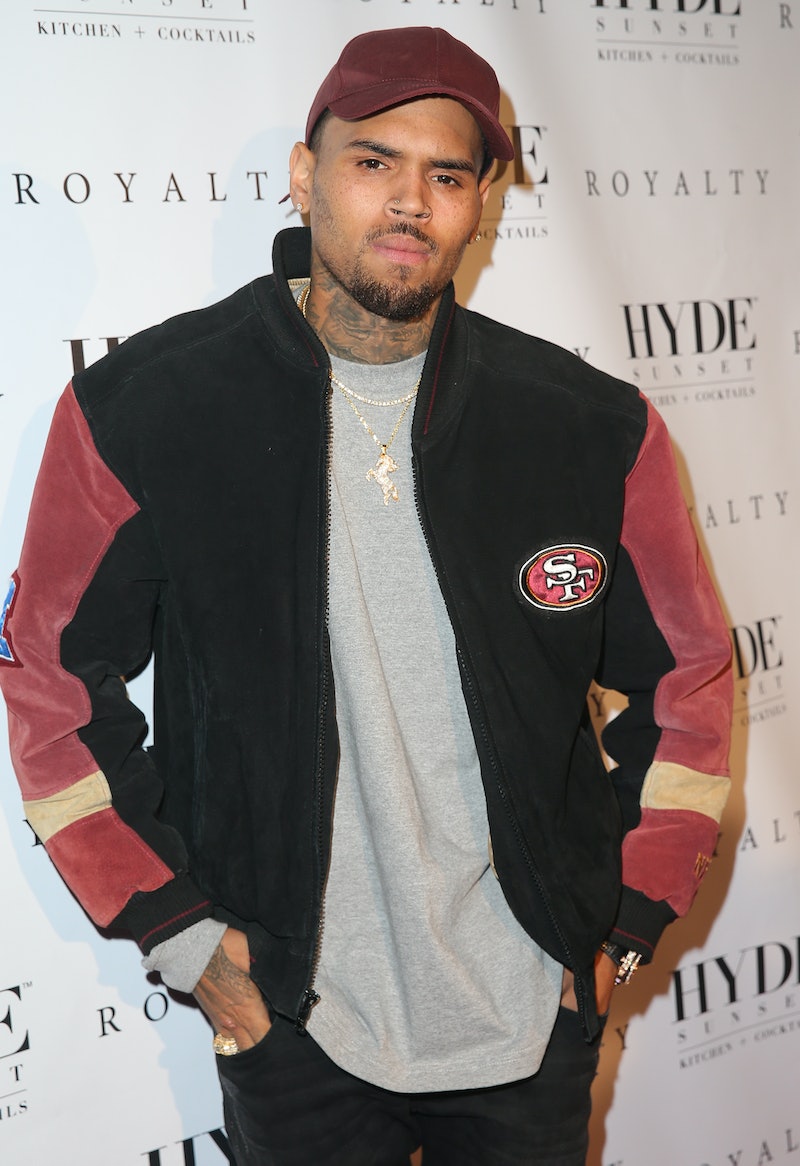 On Tuesday morning, according to police sources who spoke with the Los Angeles Times, the Los Angeles Police Department responded to a 911 call from a woman claiming Chris Brown threatened her with a gun at his Tarzana home in Los Angeles, Calif. According to the Los Angeles Times, the unnamed woman claimed Brown allegedly aimed a gun at her during what the publication describes as "a violent rage." Per the L.A. Times, authorities tried to enter the premises, but were told to get a search warrant and now law enforcement is waiting for a warrant. An LAPD spokesperson told BuzzFeed News, "The homicide division is handling an incident that occurred at Chris Brown’s house." Bustle has reached out to Brown's lawyer for comment, but did not receive an immediate response at time of request. Update: At 4:30 p.m. ET, Us Weekly published the following: "An LAPD officer tells Us: 'Police were able to obtain a search warrant and there are people inside the residence, but everyone is being cooperative.'"

Earlier: The L.A. Times also reports that the investigation is being handled by LAPD's Robbery Homicide Division, because of the "high-profile nature of the case." According to the publication, Brown's lawyer, Mark Geragos, and an LAPD tactical warrant support unit, were on their way to Brown's home by 9 a.m. Tuesday.

On afternoon Tuesday, Brown took to Instagram to defend himself and discuss the reports in several videos. "Good luck," he says in one of the videos. "When you get the warrant or whatever you need to do you’re going to walk right up in here and you’re going to see nothing, you idiots. I’m tired of ... dealing with y’all."

All of the videos are shared below, but be warned that they do contain strong and graphic language. In the first video, 27-year-old Brown says, "What the f*ck else do y'all want from me, bro? I stay out of the way, take care of my daughter, do work." He then adds, "What's gonna be next? I'ma fart an elephant?"

In the second video Brown expresses his frustrations about this allegation and says that all of this is just "giving [him] better publicity." He also notes that he did not "barricade" himself in his house or as he calls it, "a palace."

Finally, the third video is where Brown takes the time to promote his new single, "Grass Ain't Greener," which he encourages everyone to stream, download, and buy.

In the above video, Brown also mentions how this situation is "defacing his name." At this time, there have been no other developments or details released.