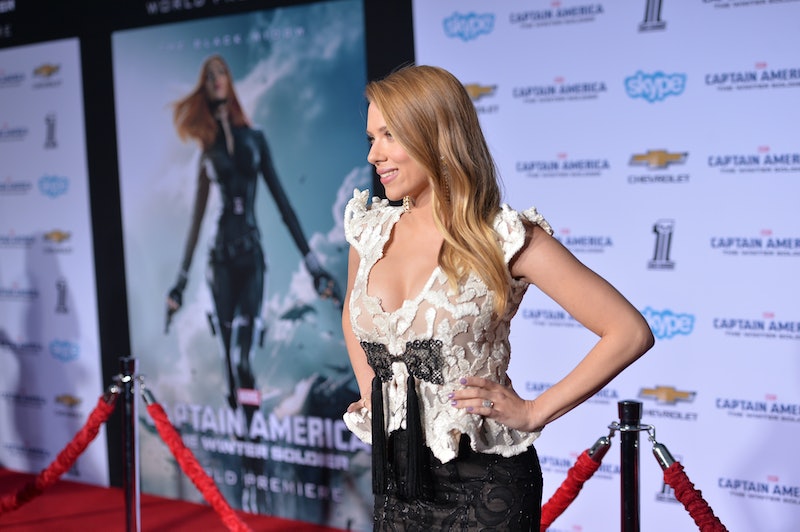 We’re pretty sure that if you asked any random person on the street to name the hottest celebrities in Hollywood, Scarlett Johansson would make the cut at least 90 percent of the time. The sexy actress has curves for days, a stunning face, and the sultriest voice around, and she’s just one of those stars whom both men and women go absolutely crazy for. And when she stepped into the spotlight Thursday to make her first red-carpet appearance since rumors started flying that she was pregnant with French fiancé Romain Dauriac’s sure-to-be-beautiful baby, she proved yet again that she definitely deserves her two-time title as “Sexiest Woman Alive.”

The 29-year-old, hot-momma-to-be practically set the red carpet on fire at the Captain America: The Winter Soldier premiere in Hollywood when she stepped out in a two-piece lace ensemble from Giorgio Armani, which she paired with matching lace pumps from Christian Louboutin. The black and white combo played up her enviable curves and ample cleavage flawlessly with its peplum, flared-hem, and tassel detailing, all of which combined to enhance Johansson's natural hourglass figure. Completing the outfit with beachy waves, dangling earrings, pastel-purple nails, and a nude lip, ScarJo looked every bit of the bombshell that she is.

We’ll admit it: We’re not exactly seeing signs of a baby bump in this smoking-hot ensemble, but assuming that one will emerge pretty soon — the actress has yet to publicly confirm nor deny the pregnancy rumors, though everyone seems to be treating it as a done deal, especially with her Avengers producer recently confirming it — this outfit leaves us feeling practically giddy with thoughts of what her red-carpet maternity style is sure to look like as she continues to promote her latest Captain America film.

And this look alone should be enough to put all of her doubters in their place — you know, those insane Avengers fans and film critics who think a pregnant actress could never pull off a tight-fitting, leather bodysuit like the one Johansson is set to don for her role as the Black Widow in the upcoming film The Avengers: Age of Ultron.

Johansson isn’t the first pregnant actress to change the way we think about red-carpet maternity style, and we're pretty sure she won't be the last either. Over the past few months alone, stars like Olivia Wilde, Kerry Washington, Emily Blunt, and Drew Barrymore — just to name a few — have really upped the ante on amazing maternity fashion. In fact, Wilde and Washington made quite a few best-dressed lists with ease this awards-show season with their stunning (and often risky) baby-bump ensembles.

If anyone could carry the torch for stylish pregnant stars and women everywhere, we think Johansson — with her penchant for tastefully sexy gowns and figure-flaunting ensembles — is undoubtedly the one to do it.