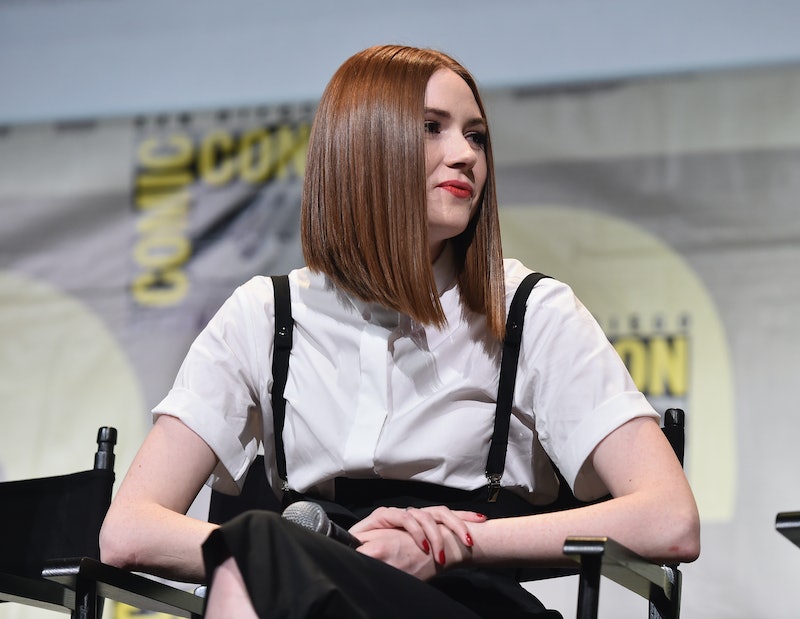 Move aside, Kirsten Dunst. There’s a new leading lady in the Jumanji sequel, and she might just be the best addition to the franchise yet. It was announced on Tuesday that Karen Gillan is joining the already amazing cast of the Jumanji sequel as the lead female in the film. It’s unclear what exactly her role will be — her character’s name and motivation has not yet been revealed — but from the sound of her cast mates’ enthusiasm, this role is a major one. If that’s the case, I can’t think of a more perfect actress for the movie. With her ample experience in shooting action-adventure films and her over all strength, Gillan is an absolute shoe-in for a role that Dwayne “The Rock” Johnson describes as “the most important role of the movie.”

And he would know. As an early cast member of the project, Johnson welcomed Gillan with an enthusiastic Instagram post on Tuesday, declaring her the perfect person for this role. In the caption, Johnson gushed, “We had to find a girl. But not just any girl. A girl who has ‘Chutzpah.’ Guts, nerve and talent to stand her ground and hold her own against Nick's cool rockstar [sic] ways, Jack's relentless energy and genius, Kevin's masterful timing and skills and the big, brown, bald tattooed guy.”

I’m assuming Johnson is talking about himself here?

So it’s no wonder that they cast an actress like Gillan. We’re talking about a woman who has some serious experience when it comes to playing women with just as much power as the men. As Johnson added in his caption, “yes, this is the girl who is so bad ass she shaved her freaking head for Guardians of the Galaxy.”

Not only did she shave her head, she totally rocked that roll, kicking butt as she and taking names. For a movie like Jumnaji, a movie that is all about fighting the elements (and, let’s be honest, running for your life when the game calls for it), she seems like the absolute perfect actress to cast in the role.