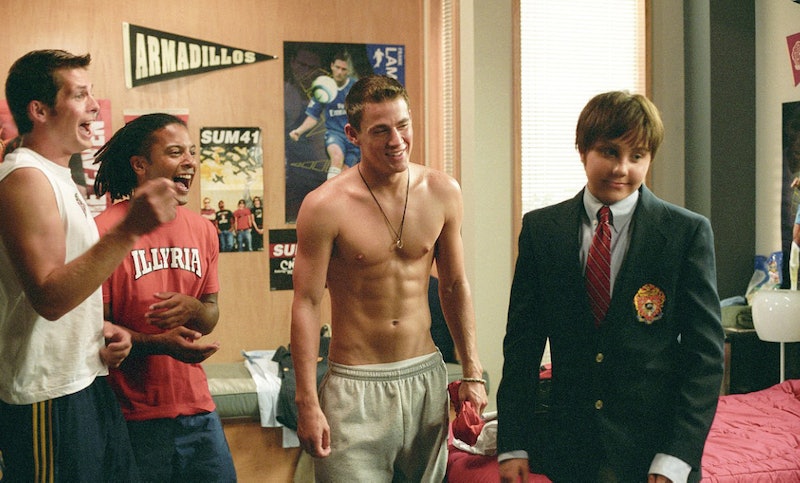 I'm just going to go ahead and say it: She's the Man is a cinematic masterpiece that is highly underrated by the general public. Besides the fact that Amanda Bynes circa 2016 had comedic timing that was damn near Oscar-worthy, the no-BS, girl power factor in this film blew others of its time out of the water. Recently re-watching it as a 25-year-old made me wonder: Why the hell have I put up with so many people's crap lately? Did I forget that Bynes and this epic story taught 15-year-old me to take no one's grief? Ever? Thank god I took this little trip down memory lane via Channing Tatum's abs, because I feel revived. And I am about to tell everybody what time it is with a little inspiration from Bynes's character, Viola.

In the very first scene, Viola and her douche lord boyfriend Justin (Robert Hoffman) are enjoying a nice beach day with some soccer, when Viola tells him she's probably better "than half" of the guys on his team. Only a few minutes in and she's affirming her talents and who she is, pouring the tea like the Mad Hatter. What an icon and an inspiration for one and all.

Shortly after, we see Viola and her friends storm over to the boy's soccer practice when they learn their team has been cut from the school. Viola demands that they get the opportunity to try out for the boy's team, but the coach laughs in their faces and tells them point-blank that girls aren't as athletic as boys. She shuts it down immediately, not only by challenging him, but by throwing a literal ball at her boyfriend's head when he doesn't stand up for her. In other words: ask for that dang promotion, or raise, or whatever it is you want in life. Throw a ball if you have to.

It's been established that Viola won't change who she is for anyone (until, you know, she pretends to be a boy to challenge gender stereotypes). This is why she isn't fake-nice to her brother's girlfriend Monique (Alexandra Breckenridge), who she doesn't like. Plenty of women may be guilty of pretending to be nice to people who are rude to them because they're afraid other people won't like them or will think they're a b*tch. I definitely have.

But Viola really doesn't care, and neither should anyone else. Speaking of, remember when she dumped Justin again like this?

Then, of course, is the driving plot, which is Viola pretending to be her brother Sebastian (James Kirk) to try out for the opposing school's male soccer team and prove she's just as good as the guys, even if it makes her look and seem ridiculous. Even when she starts to develop feelings for Duke (Tatum), she keeps her eye on the prize and still puts soccer first. Goals in every sense of the word.

This film is also brilliant at representing women as being as sexual as men are. In one scene, Viola full-on makes out with Duke, grabbing his face using tongue and all, at the carnival kissing booth. Olivia (Laura Ramsey) isn't afraid to play some mind games and redefine the act of flirting to intoxicate Duke with her presence even more. Even Eunice — who, admittedly, has a lot of boundary issues — comes through for the kill, shamelessly using her binoculars to see the real Sebastian's package at the final football game while saying, "Soccer is the world's favorite sport."

And because gender cliches are irrelevant to Viola, she also refuses to fit into the perfect, ladylike debutant mold her mother Daphne so badly wants her to be. Even she proves to be an A+ empowered female when she tells Viola, "You don't need a man to wear a beautiful dress" when Duke doesn't show up to the ball. Viola isn't hating on femininity. She's hating on having her femininity defined by anyone else.

If taken a little more seriously, everyone could've learned a lot from this "rom-com" that may have been written off as a silly teen movie 10 years ago. The protagonist, only a high school female, breaks the rules to fight for what she wants and believes in, challenging adults and the opposite sex along the way. If a young girl (although fictional) can stand her ground with such conviction — and get some make out action while doing it — so can I. And so can any of you.

More like this
At 28, Lesley Manville Was Acting, Picketing, & Singing Kate Bush Songs
By Olivia-Anne Cleary
Reese Witherspoon Gave Fans Hope For 'Legally Blonde 3' After This Surprising Movie Inspired Her
By Jake Viswanath
22 Movies On Netflix That Are Perfect For The Whole Family
By Bustle Editors
It’s Official: 'The Bachelorette' Is No Longer A Fairy Tale
By Samantha Allen
Get Even More From Bustle — Sign Up For The Newsletter