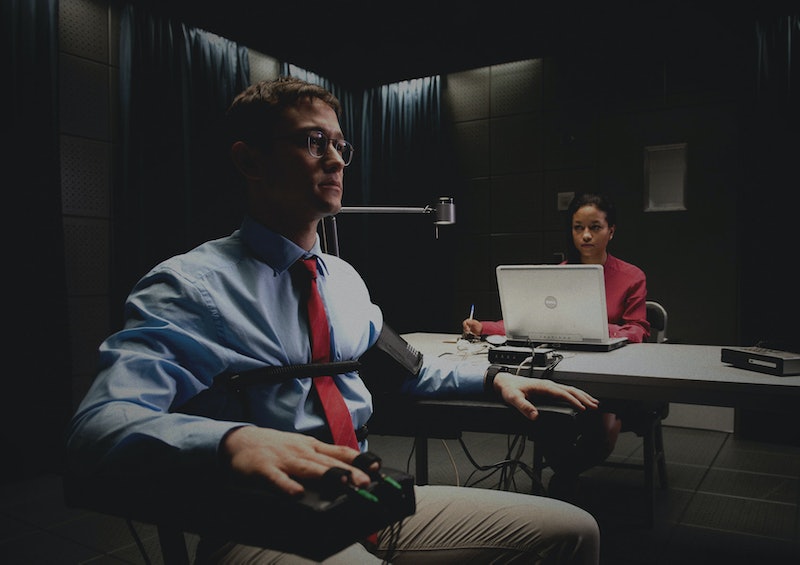 True crime has been all the rage this past year, thanks in no small part to the success of Netflix's Making a Murderer and FX's The People vs. OJ Simpson. But, while the genre is definitely taking over television (see The Case of: JonBenét Ramsey coming soon), movies are still a little behind. Hollywood films tend to stay in the biopic, legal drama arena, and movies based on true crime stories are relatively rare. It makes sense — why make a movie about one crime when you can make a movie about the criminal? Luckily, Hollywood seems to be finally getting the true crimes memo, and there are three major true crime movies coming out soon to prove it.

Traditionally, true crime movies are movies based solely on real life crimes — meaning no biopics of crime lords or trial procedurals. If you're thinking that it sounds like your average Lifetime movie, you're right. Now, because we're talking (mostly) Hollywood movies in this post, expect these true crime films to be less heavy handed with the drama than true crime movies or miniseries found on television. Needless to say, these three true crime movies coming out in 2016-2017 are all very different ways to interpret the genre. But, I'll let you judge for yourself.

Snowden is based on one of the most explosive true crimes in recent memory, if only because of the international repercussions to his crimes. In 2013, Edward Snowden became an international sensation when he revealed that the United States government and the NSA were developing programs collecting information on innocent civilians, including listening in on phone calls and gathering personal information. It was a huge revelation, one that made Snowden either a traitor or a whistleblower (depending on who you're speaking to). He was charged with espionage and fled the country; he now resides in Russia. The debate of whether Snowden committed a crime or a public service remains in full swing, making this true crime drama more an exploration of morality than the documentation of a crime. I can't wait.

I know what you're thinking: this can't be true. A comedy starring Kristen Wiig, Jason Sudeikis, Owen Wilson and Zach Galifianakis (all wearing insanely ridiculous wigs) cannot be a true crime story, right? But while Masterminds definitely leaves the doom and gloom tone of other true crime stories, it is based on a true crime. The movie is actually a retelling of the 1997 Loomis Fargo robbery, or, to be more accurate, the second 1997 Loomis Fargo robbery. In October of 1997, David Ghantt (played by Galifianakis in the film), a Loomis Fargo employee in North Carolina, drove off with $17.4 million in cash, but he wasn't working alone. In fact, 21 people were eventually sentenced for connections to the robbery. The other main conspirators, Michele Chambers, Kelly Campbell and Steve Chambers, are all characters in the film.

American Made (previously titled Mena) stars Tom Cruise as Barry Seal, a real life pilot who moved drugs for Pablo Escobar and was also recruited by the CIA "to run one of the biggest covert operations in U.S. history," according to Variety . In the '70s and '80s, Seal moved cocaine across the U.S.-Mexico border for the Medellin Cartel. He was eventually arrested and brought in as an informant to the DEA and was involved in a top secret operation in Nicaragua, though accounts of his involvement vary. He was set to testify in a court case involving the cartel when he was murdered in 1986.

Here's hoping there are more true crime movies like these on the horizon.