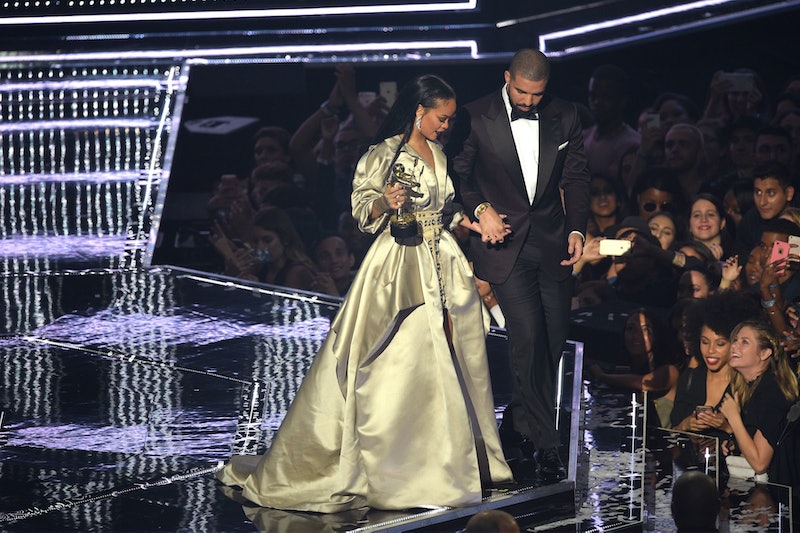 When isn't there a day that Drake and Rihanna fans aren't wondering if the two are an actual couple? After that speech the rapper gave about RiRi at the 2016 MTV Video Music Awards, I'm sure their shippers are totally convinced they are an item. Well, on Wednesday, E! News revealed some photos of Drake and Rihanna getting cozy in Miami that absolutely prove they are a couple, if you ask me. Granted, they haven't commented on their relationship status, but my eyes do not deceive me. Basically, thanks to the following photos, the musicians are going to have a hard time denying there is anything romantic going on between them.

Seeing as Drake's tour was taking him to Miami after the VMAs, both he and Rihanna flew to Florida, per E! News. That's what couples (or, alleged couples) do, right? They also went to a Miami club, where they took their PDA to a new level. In the photos, Rihanna can be seen whispering in Drake's ear, Drake can be seen with his hand caressing the ANTI artist's face, and they were even spotted leaving the club holding hands. Based on their facial expressions, this is so much more than friends hanging out. They both look smitten with one another in a way that only two people who have strong feelings for another would.

A source told E! News about their PDA-filled Miami trip, "Rihanna and Drake were happy, not hiding, and totally affectionate in front of everyone. At one point they were kissing and holding each other. They seemed very comfortable with each other. Besides for when he was performing, they didn't leave each other's side."

Let's also discuss this photo of Drake's hand on RiRi's face. I'm pretty sure her eyes aren't closed because she's tired. No one wears that facial expression while another person touches their face unless they have intense feelings for someone. As for the other photos, they have such an ease between them that shows how wonderful of a (rumored) couple they are.

There has been so much back and forth over whether or not Rihanna and Drake are dating, but after looking at these photos I'm confident in my opinion that they are a couple.