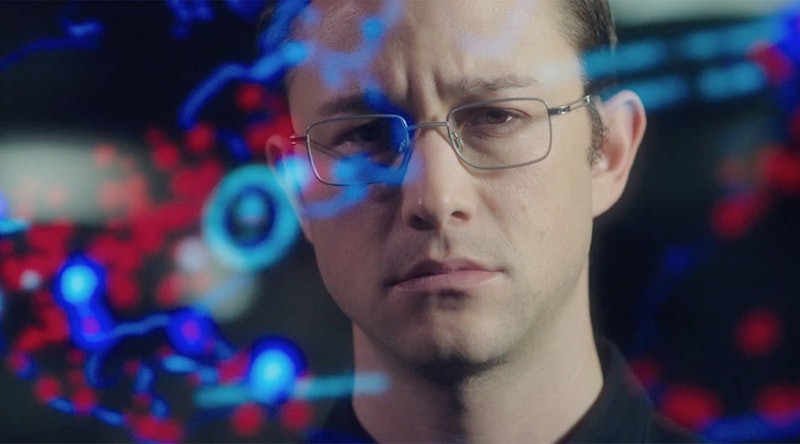 Edward Snowden is back in the news. No, the infamous (or heroic, depending on whom you ask) NSA leaker has not released any new government documents. Instead, he's having his story told in a high-profile Hollywood movie. The film is directed by Oliver Stone, who has built a career on depicting controversial cultural events in American history in films like Platoon, JFK, and World Trade Center. Given the prestige of Stone, it's no wonder that Snowden has one of the most star-studded casts of the year, but how do the Snowden actors compare to the real people they're portraying?

As is the case with most biopics, some actors fit their roles better than others. Pretty much everyone knows Joseph Gordon-Levitt is playing Edward Snowden, and while the actor doesn't look a ton like the former CIA employee, the film could have certainly done a lot worse when it came to casting him. As for the rest of the cast, which includes some big names like Shailene Woodley, Melissa Leo, Zachary Quinto, and Tom Wilkinson, their similarities to their subjects vary quite a bit. So take a look at the photos below comparing the actors of Snowden to their real-life counterparts, and see how everyone stacks up.

Like I said, Gordon-Levitt definitely isn't a dead-ringer for Snowden, but he's still a slim, white guy, so there's that.

Woodley plays Snowden's girlfriend, and I have to admit she doesn't share much in common with the dancer and acrobat.

Poitras is one of the three journalists who received Snowden's leaked documents, and doesn't look too dissimilar to Leo.

Quinto's definitely younger than Greenwald, another of the three aforementioned journalists, but at least they have the same hair? Kind of? OK, I'm reaching here, they don't look much alike at all.

MacAskill is the third and final journalist, and honestly, this is pretty spot-on casting.

Some of the Snowden actors look like the people they're portraying, and some don't. At the end of the day, all that really matters is their performances, and I have no doubt they'll all excel in that regard.

More like this
Then Vs. Now Photos Of The 'Enchanted' Cast In 2007 & The Sequel's Stars In 2022
By Marina Watts
24 Photos Of The 'Love Actually' Cast Then & Now
By Grace Wehniainen
Yes, That's Lindsay Lohan's Sister Singing In The 'Falling For Christmas' Movie
By Radhika Menon
Keke Palmer Paid Tribute To "Other Half" Darius Daulton After Announcing Pregnancy
By Jake Viswanath
Get Even More From Bustle — Sign Up For The Newsletter