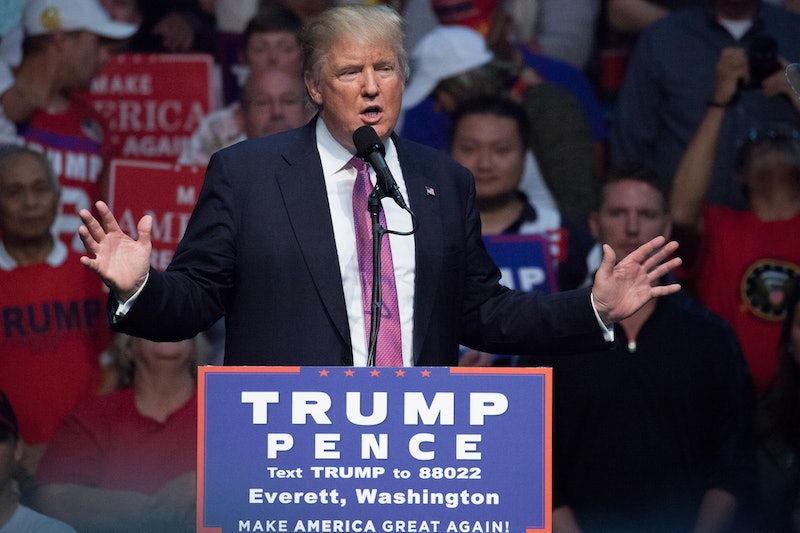 Well, here's a surprise for you ― according to Bloomberg national political reporter Sahil Kapur, Republican president candidate Donald Trump and Mexico's President Peña Nieto ignored "the wall" in their meeting on Wednesday. Or at least, that's how Trump characterized the meeting.

Speaking before assembled press following the meeting with Peña Nieto ― which Fusion's Jorge Ramos described as being "between two of the most despised and hated people by millions of Mexicans on both sides of the border," for the record ― Trump said something that should probably give his diehard anti-immigration supporters some pause. Namely, he revealed what he didn't say while he was talking with the Mexican president. According to the GOP presidential nominee, real estate magnate, and widely-renowned tough talker, he didn't actually broach the topic of how his infamous border wall would be paid for.

This is notable, because for months and months, hard-line immigration policy was more or less Trump's sole articulated policy position, and he was very clear about his plans: some variation of "We're gonna build a wall, and Mexico is gonna pay for it!" And yet, in his first trip abroad on genuinely political business (his brief jaunt to open up a golf course in Scotland doesn't count), Trump apparently shied away from talking dollars and cents.

All in all, the scene was maybe the closest to looking like a president Trump's ever come ― standing beside a foreign head of state, translator at hand, discussing some manner of diplomatic meeting, the whole deal. But it was also notable for what it suggested about Trump, and the divide between his often-inflammatory rhetoric and the cold, hard realities of the job he's running for. It seems, simply put, that getting a foreign country to finance your pie-in-the-sky construction projects isn't as simple as showing up and barking some orders.

Just by way of contrast, here's how Trump usually talks about the wall. During the CNN-aired Republican primary debate in February, when Wolf Blitzer challenged Trump's proposal with a decidedly outraged quote from former Mexican president Vicente Fox, he was threatening to tack more height on the thing on general principle — "The wall just got ten feet higher!"

Many of his supporters are into the idea, to put it lightly. Chants of "build the wall" are a regular feature of Trump's campaign events and rallies, and sometimes he even joins in on the fun. It's so easy and casual when it's in the abstract, but just a little bit tougher when you've got a sit-down with the leader of the country you've accused of sending "criminals" and "rapists" into the United States.

In short, if you're a pro-Trump stalwart, maybe this doesn't matter too much to you ― you can reason that it's just Trump playing nice before dropping the hammer if he's elected, or if you're actually hoping for a more moderate, even-keeled Trump, maybe you'll believe it. That has to be at least part of his motivation for making the trip, after all. But the harder part of his schedule Wednesday may come later in the evening, when he delivers his much-ballyhooed major immigration speech in Arizona.

That speech will likely set the tone ― or at the very least, a tone ― for his campaign in the days and weeks to come. Of course, if his widely reported "softening" approach holds true (and some of his surrogates have strongly denied this, including his son Donald Jr.), you can be sure that Democratic nominee Hillary Clinton won't want his past record to fade into the rear-view mirror.