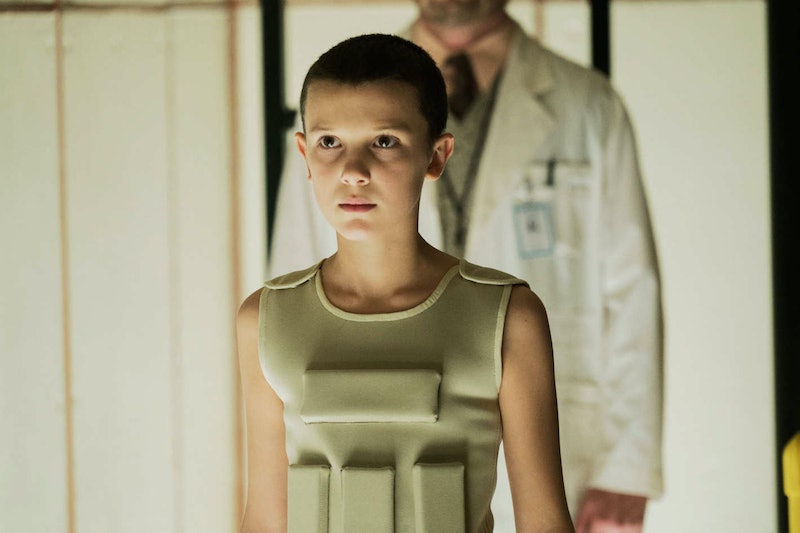 There are so many reasons why the world collectively marathoned Netflix's new nostalgia-inducing original series Stranger Things. From its Stand By Me meets E.T. aesthetic to the show's perfect use of '80s darling Winona Ryder, it was a hit from the start. However, if I had to give one reason why I continued to watch the sci-fi series, it would have to be Stranger Things ' surprising breakout character Eleven, who was able to make audiences feel every possible emotion despite barely saying anything at all. Though I love Mike, Lucas, and, of course, Dustin, it was the girl in their squad — Eleven — who was able to combine the sci-fi elements of the story with a real, highly tragic human story. Though Eleven seemingly sacrificed herself during a confrontation with the Stranger Things monster, any fan would hope that Eleven will appear in Season 2 of Stranger Things , which Netflix announced returns in 2017. Now, we finally have our answer — but it won't tell us everything about Eleven.

According to a new spoiler from TVLine, Eleven will return to Stranger Things , though how she'll make an appearance is still up in the air. According to the spoiler, the Stranger Things heroine "will be back in some form," which could mean a plethora of things. In an ideal world, it means that Eleven survived her encounter with the "Demogorgon" and actually can attend the Snowball Dance with her crush Mike. It would be a win-win for everyone, and would make sense considering Hopper was seen leaving an Eggo in the woods for what we can only hope is a frozen waffle-loving Eleven.

Of course, that's not the only possibility for Eleven's fate in Stranger Things. I'm a little concerned about the spoiler using the phrasing "in some form" as opposed to simply will return. If Eleven is returning, it seems likely that she won't return just to pal around with Mike, Will, Lucas and Dustin full-time. Eleven returning to the "real world" after she seemingly made a huge sacrifice for her friends would feel a tad anticlimactic, but that doesn't mean it's not possible for her to do so after a difficult journey. Perhaps Eleven has been trapped in the Upside Down, and it will be her friends' job to rescue her in the same way that Eleven helped rescue Will. Given that Mike is likely still carrying a torch for Eleven, I can imagine he'd go to the ends of the earth — quite literally — if it meant being able to get his gal pal back.

No matter how Eleven gets back to Stranger Things, the important thing is that she does. Eleven is a smart, compassionate, and tough character who isn't afraid to be emotional or vulnerable while taking down the bad guys and being her general badass self. We need her on Stranger Things, and I'll be happy with however she returns.