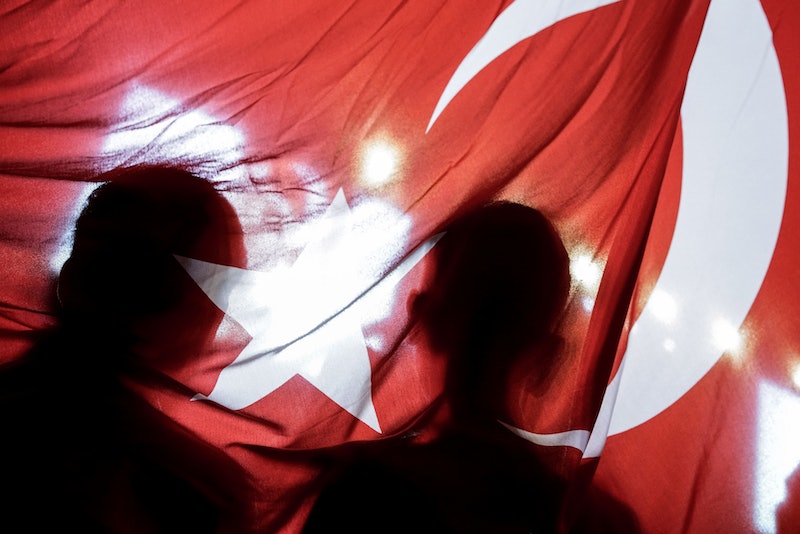 On the night of July 15, 2016, elements within the Turkish army attempted to overthrow the elected government of the country. At the beginning of the coup attempt, the army warned civilians to stay indoors. Instead, at great personal risk, thousands of ordinary Turks poured into the streets and confronted the rebel military units. The vast majority of those who took to the street that night were men, but a number of women made the heroic choice. Aylin,* a young newlywed living in Istanbul, is one Turkish woman who risked everything during the coup to make a stand against the military that night.

The trust the Turkish public once placed in the military, which had allowed them to successfully overthrow the government in the past, has significantly eroded in recent decades. This wariness stems from a number of factors, including the brutality with which the military junta wielded power in the wake of the 1980 coup. Unlike during past coup attempts, ordinary Turkish civilians of all political stripes — many of which, like Aylin, grew up in the repressive wake of the 1980 coup — were not going to sit quietly by while the military tried to seize power this time.

At 10 p.m. on Friday, July 15, Aylin and her husband were enjoying a quiet evening at home. Aylin was in the midst of her yoga routine when her husband received messages from friends staying in Turkey’s capital of Ankara saying they had heard explosions and gunfire from their hotel in the city center. At first, Aylin thought they must be mistaken, and went on with her vinyasas. However, other friends soon began making similar reports on social media. She and her husband turned on the TV and spent the next hour or so watching in terrified confusion as images of tanks and military units on the streets of Ankara and Istanbul began to trickle in.

They were still watching the news just after midnight when their worst fears were confirmed. Her mind began racing. Aylin is related to a former parliament member of the ruling Justice and Development Party (Adalet ve Kalkinma Partisi or AKP) and, if the coup succeeded, she and her family were likely to be in real danger.

As soldiers stormed the state broadcaster live on air and forced the anchor to read the official coup announcement, “It was a nightmare,” Aylin says. “I never thought that one day I would be listening to [a coup declaration]. I had heard too many things about the 1960, 1971, and 1980 coups. And here it was, happening again.”

In the wake of the last successful coup in Turkey, hundreds of thousands of people were arrested and put on trial because of their political affiliations. Everything Aylin had ever heard, read, or watched about Turkey’s previous coups was swirling through her head. For a brief moment, she wished she had a gun for her own protection, even though she had never touched a gun in her life.

Aylin was scared, she says, but she wasn’t just going to sit there and wait for events to unfold. “Let’s go out and do something!” Aylin urged her husband. Her husband’s first reaction was also to go out, but not to fight the rebelling military units. He wanted to stock up on essentials like bread and water. She had other things in mind.

In the heat of the moment, she had a flash of anger, she says. “I felt furious [at him]. Can you imagine, if this coup was a success, they would have targeted both of us for punishment [because of our political connections], but he was thinking of bread and water!” Her husband insisted on going out to pick up supplies, and Aylin insisted on accompanying him.

Taking To The Streets

While Aylin was working to convince her husband to resist the coup, Turkey’s president and most powerful political figure, Recep Tayyip Erdogan, was MIA. It was clear he was vacationing somewhere in the south of the country, but there were conflicting rumors regarding his location and status. Because of the uncertainty surrounding the president, Aylin thought for a point during the night that he had been killed. Aylin contemplated a difficult decision: “to stay at home and die like a coward or die for my Turkey’s future.” In that moment, she had made her decision.

Soon after, President Erdogan appeared on television. Speaking to a news anchor via FaceTime, Erdogan urged supporters to gather in squares and at the country’s airports, in defiance of the attempted coup. It was Erdogan’s call to action that finally convinced Aylin’s husband to protest with her, though Aylin insists that she did not go out that night solely as a response to Erdogan's call to mobilize.

In fact, according to analysis by a Council on Foreign Relations publication, the mobilization that occurred in Turkey's major cities on the night of the attempted coup consisted of many Turks who took to the streets before President Erdogan called for his supporters to mobilize.

Aylin and her husband joined a crowd headed toward Istanbul’s Ataturk International Airport. They walked for about an hour in a group of about 100 people, only one or two of whom were women. However, at the time Aylin says she was more frightened by the events that were unfolding around her than being a woman in large crowds of protesting men. “It wasn't strange. I didn't think about gender. I was a person who trying to do something about her country.”

A Moment Of Terror

As their group was on the way to the airport, a tank commanded by a rebel military unit passed by, and everyone began yelling in defiance. A second tank arrived, and some in the group charged the vehicle. At that point, the civilian government had not yet scrambled any military units of their own, and the protesting crowds could not rely on any support from loyal security forces. The rogue tank turned and began moving toward the crowd. Gunshots rang out, and Aylin and her husband ran for their lives. “It was the most terrible moment of my life,” Aylin recalls.

After their close call, Aylin’s husband wanted to turn back, but she insisted that they continue on. When they finally made it to the airport, they were greeted by a huge crowd of fellow Turks who had also come out to resist the coup.

About an hour after they arrived, Erdogan’s plane touched down in Istanbul. Although many in the crowds stayed out until dawn, Aylin and her husband headed home soon after Erdogan arrived. They were exhausted and were reassured that the arrival of the president would put an end to the rebellion.

On their long walk home, they were reminded that the coup had not yet been fully suppressed. In the early hours of July 16, Istanbul was buzzed by fighter jets flown by rebel pilots. The jets flew low and fast, breaking the sound barrier and creating sonic booms that exploded across the city. Aylin, like many others at the time, thought Istanbul was being bombed. When she returned home in the early hours of the morning, Aylin still was not sure if her country had survived the coup.

Thanks in part to the thousands of ordinary citizens like Aylin, Turkey’s civilian government was able, for the first time in Turkish history, to suppress a military coup. Hundreds lost their lives, including some brave women who were killed by rebel soldiers, have now become immortalized as martyrs to democracy in Turkey.

Despite the violence of that night, and the political polarization of the country, Aylin is extremely hopeful about the future of Turkey. The political solidarity between the leaders of two of the three opposition parties and the ruling AKP gives her hope that the political hostility of the past can be mended. She feels that the shared experience of the coup has made citizens “more respectful of each other ... I hope this continues forever.”

Turkey’s political future is uncertain, as thousands of people who are accused of having ties to the Gulen Movement, which Turkey’s government and the majority of Turks — including Aylin — believe were the masterminds behind the coup, are arrested or fired from their government jobs.

However, the events of July 15 and 16 make one thing perfectly clear. Turks are willing to put their lives on the line in order to defend their popularly elected civilian government. The experience of Aylin and the other women on the streets that night also proves that during moments of crisis, a willingness to take a stand outweighs superficial identifiers like gender.

* Editor's note: Aylin is a pseudonym. Her first and last name are not being used in order to protect her privacy and safety during the current period of political instability in Turkey.