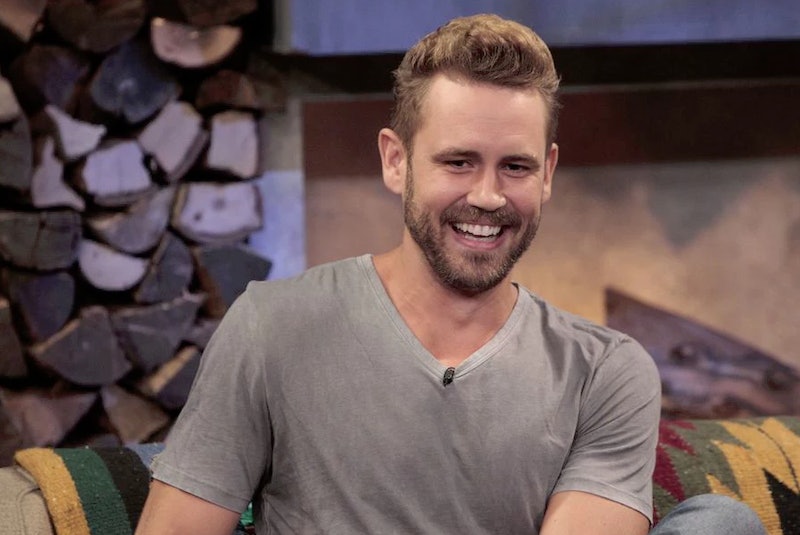 On Tuesday night, Bachelor Nation was sent into a tizzy when Nick Viall was named the next Bachelor. While it seems like he was being primed for the spot by his time on Bachelor in Paradise this summer, the news was still surprising because it went against the trend of the next Bachelor being chosen from the previous Bachelorette season. And not only that, being Bachelor will mark Viall's fourth time being featured in a season of the franchise, and, at 36 (he's currently 35, but will turn 36 on Sept. 29) Viall will be the third oldest Bachelor ever. During the show's sixth season, then-40-year-old Byron Velvick was featured and during the 15th season, Brad Womack (who was making his second appearance as Bachelor; he also starred on the 11th season) was 38. Viall's age raises the question of how old the contestants on his season will be. It's hard not to notice that the contestants on The Bachelor tend to be younger than the male star, while contestants on The Bachelorette tend to be older than the woman seeking love.

Will Viall's season break the mold? It, of course, depends on who the show casts, but that may depend somewhat on Viall's preferences. Ashley Harper, a contestant on Sean Lowe's season claimed that he had a say in why the cast was more diverse. "He specifically asked the producers to have more diversity within the contestants, and that’s the rainbow of beauty that’s showcased that year," she told Fusion in a story about black Bachelor/ette contestants. (FYI, Viall's BiP costar Jubilee Sharpe seems to think Viall will follow a similar path.)

Viall has also been outspoken about what he looks for in a woman. He told Bustle in 2015 that he's "always been attracted to very strong personalities" and "attracted to confidence, and a woman who knows her own self-worth." After three shots at love on the series, he seems to be very serious about finding a relationship, so perhaps he'll tell the producers exactly what he's looking for and they'll make it work. (They wouldn't want to see Viall "fail" again either, would they?) And, I think, going along with this, there's a good chance that he could end up with a cast that is a bit older and includes women who know what they want and are ready to settle down into a long-term relationship.

It's unlikely that every woman cast as the Bachelorette has wanted to date a man older than her or that every Bachelor has wanted to date a woman younger than him, and even if they have, the show could still take it upon itself to try to change the stereotype of this being the age dynamic men and women want. And while the show doesn't need to totally flip the script, with Viall now being the Bachelor, it gives the show a good opportunity to cast more women who are above the 30-year mark.

I know that Viall will be making his fourth appearance on the show when The Bachelor premieres, but I feel good about his chances, and that's partially because he will be going into the series as a 36-year-old. He'll have plenty of life wisdom, and lord knows he'll have plenty of Bachelor franchise wisdom, too.