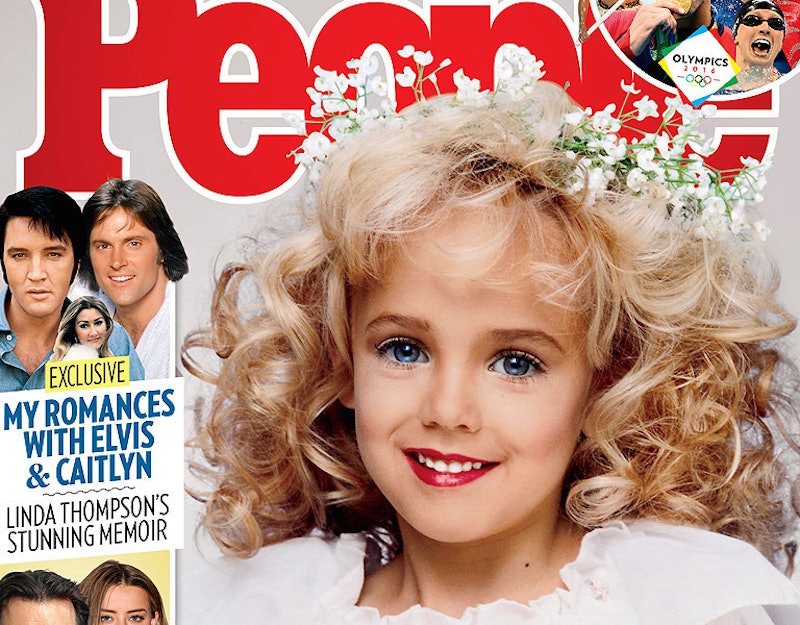 On Monday, Sept. 5, John Bennett Ramsey, for who his daughter JonBenét was named, will be featured in an interview in the A&E documentary about JonBenét's murder, The Killing of JonBenét: The Truth Uncovered. Come December, 20 years will have passed since the 6-year-old beauty pageant contestant was found killed in her Boulder, Colorado home and though the case remains unsolved, certain pieces of evidence keep coming up. For example, why does pineapple matter to JonBenet Ramsey's murder? Though both John and Patsy Bennett have consistently maintained their innocence, were never charged, and were officially cleared of any involvement in their daughter's death in 2008 because of new DNA testing, as reported by NBC, pineapple found in JonBenét's digestive tract is a part of the investigation that the public just can't seem to forget.

In October 1999, The Denver Post reported, "John and Patsy Ramsey repeatedly told reporters and police that they put their sleeping daughter to bed as soon as they arrived home from visiting friends on Christmas night." Coroner John Meyer found pineapple in JonBenét's stomach during her autopsy, which the The Denver Post claimed could allegedly suggest that JonBenét had eaten at some point after she got home from the Christmas party. The Denver Post also reported that a bowl of pineapple was allegedly found in the family's kitchen. According to CBS News, Patsy denied feeding JonBenét pineapple during her police interrogation. "I did not feed JonBenet pineapple. OK? So I don't know how it got in her stomach. And where this bowl of pineapple came from. I can't recall putting that there," she said.

The UK newspaper Express wrote about the pineapple in April 2016 and reported, "The police made matters worse: they didn’t seal the crime scene, they allowed a bowl in the kitchen containing pineapple to be washed up," suggesting that potential evidence from the bowl could have allegedly been affected during clean-up.

This idea of the police making a mistake in the investigation was backed up by Boulder detective Lou Smit, who The Denver Post reported had said, "The house should have been totally shut. The crime scene was screwed up." Smit was referring to the fact that, as The Denver Post reported, Patsy had woken up on Dec. 26, 1996 to find a ransom note and JonBenét missing, then called 911. Instead of the police closing off the house for investigation, John was actually the one who found JonBenét's body hours later. Smit believed that JonBenét's parents were innocent until his death in 2010.

Patsy died from ovarian cancer in 2006, before she and John were officially cleared of all involvement in their daughter's murder, and can no longer speak out about the case. However, John has continued to give limited interviews to the press over the years and even wrote a book, The Other Side of Suffering , about the horrifying experience and his Christian faith. While he may not discuss the pineapple specifically when The Killing of JonBenét: The Truth Uncovered premieres on Monday, Sept. 5, the documentary still gives him another chance to discuss his daughter's murder in his own words.