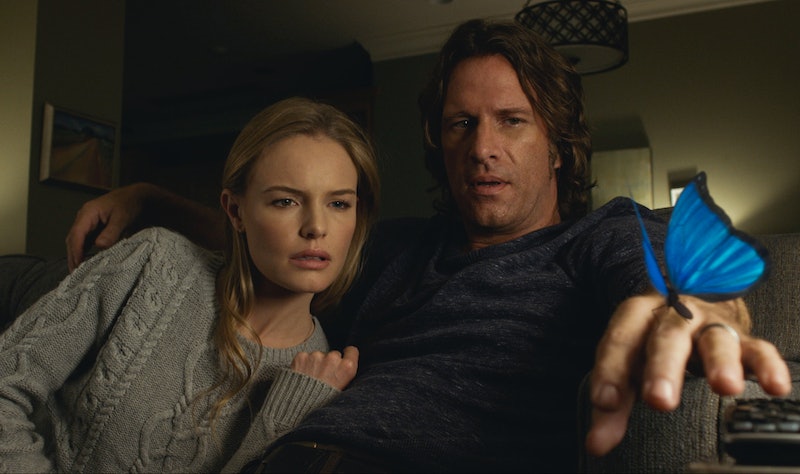 When will the horror stop?! Call me crazy, but it seems like 2016 has had more scary movies than any year ever — and a number of them have been legitimately terrifying films. What's worse is that several of the most frightening have taken inspiration from real life. The Witch is inspired by Colonial-era New England Folklore, The Forest is influenced by Japan's "suicide forest," and The Conjuring 2 is based upon the actual case files of paranormal investigators Ed and Lorraine Warren. But what about the newest horror movie to hit theaters? Is Before I Wake a true story?

Thankfully, the movie is complete fiction. I say "thankfully" because this movie's plot is downright horrifying. A young couple, after the unfortunate death of their son, adopt a new child, Cody ( Room 's Jacob Tremblay). Everything is fine at first — until nighttime rolls around. See, Cody's dreams become reality. Literally. Whatever he's dreaming while he's asleep actually manifests itself in the real world around him. This is harmless and actually pretty cool when it comes to his pleasant dreams, but since Cody suffers from frequent nightmares, the dreams can quickly turn deadly. So where did this plot, which sort of reads like Nightmare on Elm Street in reverse, come from?

The film, originally titled Somnia, was written by its director, Mike Flanagan, along with co-writer Jeff Howard. Flanagan has built an impressive portfolio of horror films in just a few years, writing and directing Absentia (2011), Oculus (2013), Hush (2016), and the upcoming Ouija: Origin of Evil. His concept for Before I Wake arose from his desire to depict the feeling of loss, illustrated in the couple's loss of their son in the film, and he considers that to be the main theme of the movie — along with people confronting their own personal demons. Here's what he told Brendon Connelly of BleedingCool.com in 2014:

"I think that for someone like me, monsters and ghosts are very real but only in so much as the ones we create, the ones we are all haunted by. They have everything to do with our past, with regrets, mistakes we’ve made, people and time we’ve lost ... Somnia, even more than Oculus, is dealing with intense feelings of loss, and of the worse kind. I don’t know if there’s any real world horror, or a personal level at least, that can compare with losing a child. I think my other movies have been building up to Somnia in a way."

Before I Wake is a work of fiction — no one's dreams are going to start coming to life — but its themes of personal loss and the fears that go along with it are all too real.