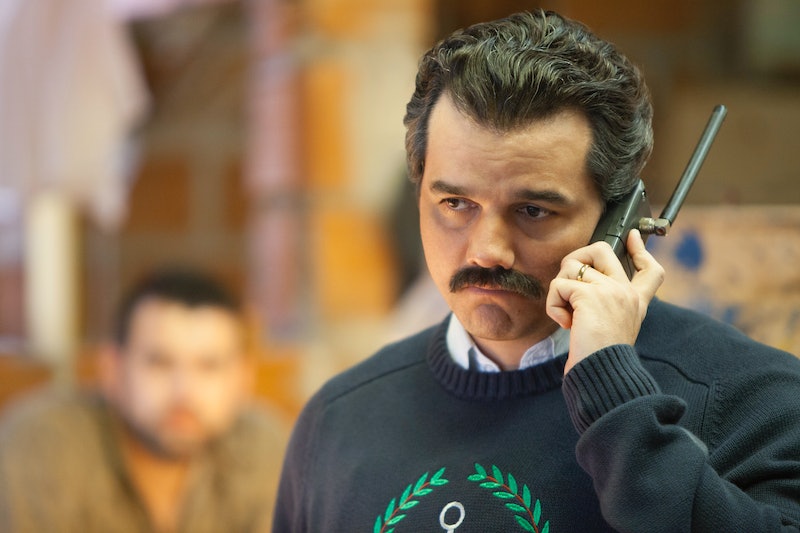 The Netflix series Narcos is, much like Pablo Escobar, one step ahead of us. The creators know that since this show is based on a true story, fans will have looked up what happened to the real-life characters involved — and so their entire marketing campaign makes the assumption that fans know Pablo Escobar's death is coming very, very soon. So how accurate is Narcos Season 2, especially when it comes to how Escobar died? Since a lot of the actual history is still unknown, there's really no way of telling whether or not the Netflix series got it "right." Their interpretation is as good as ours.

In general, the show embellishes the facts with a little fiction. Some of the names have been changed, as we learned in Season 1 with Valeria Velez, who is inspired by Virginia Vallejo. There are a few characters in Narcos who are not based on real people. For example, there's the fictional Judy Moncada, who returns in Season 2 seeking revenge on Pablo for the death of her husband. So even though Narcos will often include real news footage from the '90s, the show has taken liberties before, and presumably will continue to in Season 2.

As for Pablo Escobar's death, the actual perpetrator is not known, since he was taken down in a massive rooftop shootout. An LA Times article from 1993 which reported on his death simply stated that "Colombian special forces" were involved. Business Insider laid out three possibilities that have circulated over the past two decades, if you are interested in exploring them.

Like I said, there is really no way of knowing whether or not Narcos Season 2 is ultimately accurate. Of course, these details are not the only thing that may or may not be true. Did Pablo Escobar really wear that many nautical sweatshirts? That's the type of question that I want answered. All in all, I think this mystery makes the second season all the more exciting going into it. They don't need to change the story to keep the audience on its toes, because the truth is, to use an old cliché, stranger than fiction.

More like this
Wait, What’s Going On With Ben In That Umbrella Academy Season 3 Post-Credits Scene?
By Gretchen Smail
Legacies Showrunner Said There Is Still Hope For More Vampire Diaries
By Gretchen Smail
Everything To Know About The Flash Season 9
By Brad Witter
20 Photos Of "Beefy" Jeremy Allen White To Tempt You To Watch 'The Bear'
By Radhika Menon
Get Even More From Bustle — Sign Up For The Newsletter