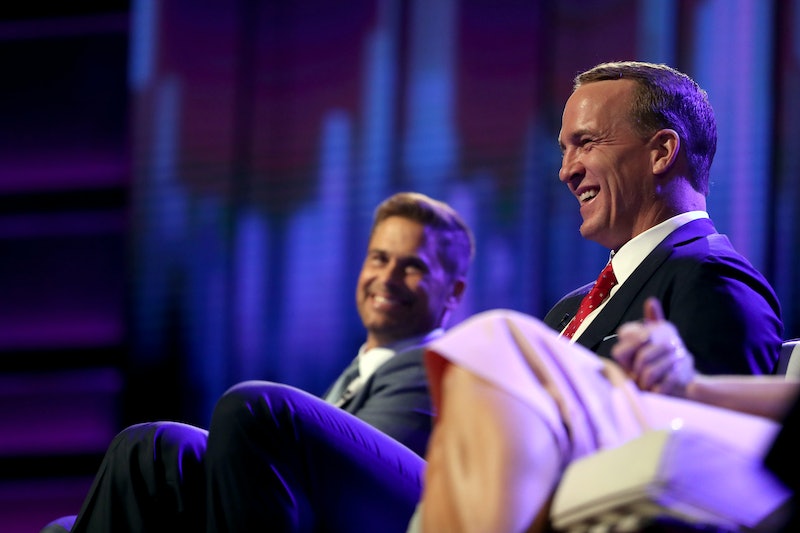 A good friend will be there for you when you lose a member of your family or end up in the hospital, but it takes a special kind of person to poke jabs at you at your very own roast. So when I heard that Peyton Manning would be one of the roasters at the Comedy Central Roast of Rob Lowe, I was very curious to find out how these two know each other. Are Rob Lowe and Peyton Manning friends or was he simply the only available celebrity the network could round up at the time? Well, after a little digging, I found out that these two guys have a pretty unique history together that will even come to serve as the butt of one of Manning's jokes throughout the night.

You see, Lowe is a big sports fan, specifically of the Indianapolis Colts, which just so happened to be Mannings NFL team before he transferred to the Denver Broncos. In fact, according to The Washington Post, the actor is a very good friend of the team's owner Jim Irsay. So when Lowe tweeted that he heard Manning would be retiring from football back in 2012 — after having undergone several different neck procedures the previous year — people took the claim to be fact, which sent social media into a frenzy of epic proportions. After all, if Lowe has a close relationship with the owner, then he would probably know what's really going on... right? Not exactly.

Here's how the tweet read prior to it being deleted:

"Hearing my fave, #18 Peyton Manning will not return to #NFL. Wow.#Colts"

Obviously, this rumor spread like wildfire, which Manning was forced to put out quickly thereafter. And, of course, it turned out to be completely untrue, considering the quarterback went on to play football for four more years and win the 2016 Super Bowl after his transfer to the Broncos. And Lowe definitely didn't say this to start an internet uproar. Like his says in the tweet, Manning was his favorite player — a sentiment which I'm sure holds true to this day. But you can't deny that this was definitely an awkward mistake to make nonetheless, so can you really blame Comedy Central for wanting Manning to be there for the roast? I mean, it offers up the perfect opportunity to bring this little faux pas back into the spotlight. And that's exactly what Manning did...

In the above clip, which has aired prior to the Labor Day roast, Manning takes a nice little jab at their longstanding history together all while taking Tom Brady down in the process. "If they ever stop casting you in sitcoms, just look on the bright side," Manning quips. "You tried to take the air out of my retirement announcement so fast, you can probably get a job as Tom Brady's ball boy."

Suffice to say, Manning may be retired, but he still packs a powerful punch, whether it's on a football field or a roasting stage. But it's all in good fun and there are clearly no hard feelings between either party. They both respect and admire each other for their craft, but are comfortable taking each other down a peg or two when the opportunity presents itself. Game on, boys.