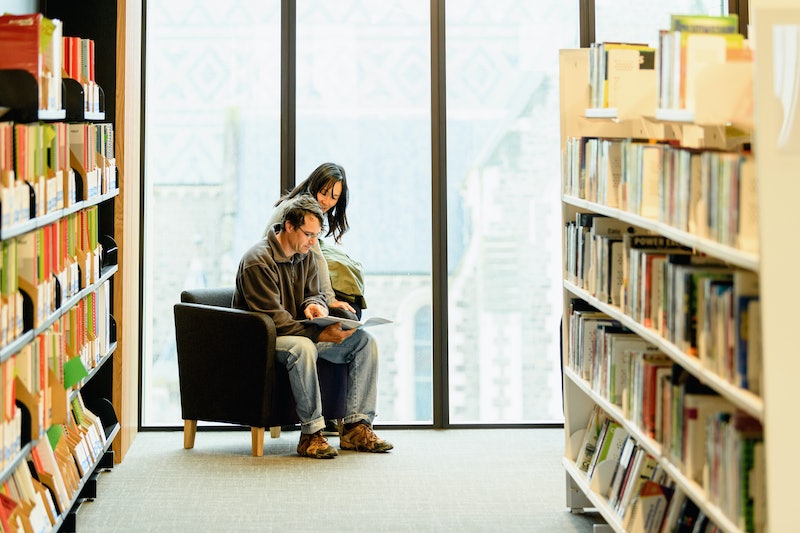 Pew Research Center just released their reading data for 2016, and I know you're all wondering whether you read more books than the average American. As long as you're one of the 73 percent of people in the United States who have at least attempted to read one book in the last year, you're in good standing. Here's what Pew has to say about U.S. residents' reading habits.

People are still reading, and — with the exception of e-book reading — their habits remain largely unchanged. Yes, despite what you may have heard, books are still just as popular today as they were when Pew began to track U.S. reading data five years ago. The average American still reads just four books per year, and the typical American reads 12.

The popularity of print books is up two points this year, with 65 percent of Pew respondents saying they've read one within the last 12 months. The all-time high was in 2011, when 71 percent of respondents had read a print book. Thirty-eight percent of U.S. residents read print books exclusively.

E-books and audiobooks continue to rise in popularity, but aren't close to reaching the ubiquity of printed volumes. Only 6 percent of respondents are digital-only readers.

Women read more than men. This has not changed in the last decade, at least. A typical man reads nine books in a year, while a typical woman reads 15. Women are also more patient readers than men, but — because Pew counts books as read whether you finish them or not — this reading habit has no bearing on their reading statistics. Additionally, the sexes consume e-books and audiobooks at equal rates.

Don't let anyone tell you that younger demographics aren't reading. Eighty percent of 18- to 29-year-olds read at least one book in 2015, which puts millennials' bookish habits on par with all college-educated adults. Eighty-one percent of people with some college education, and 86 percent of college graduates, told Pew they'd read a book in the last year. Although greater percentages of younger demographics read books in 2015, age does not affect how many books a person reads.

There's still some bad news, however. More than one-quarter — 26 percent, in fact — of the population didn't read at all in 2015.

To those people, I have just one thing to say: Please read. Book nerds, please give books to your non-reader friends. Because books are the best, folks, and it's a shame that some people are missing out.