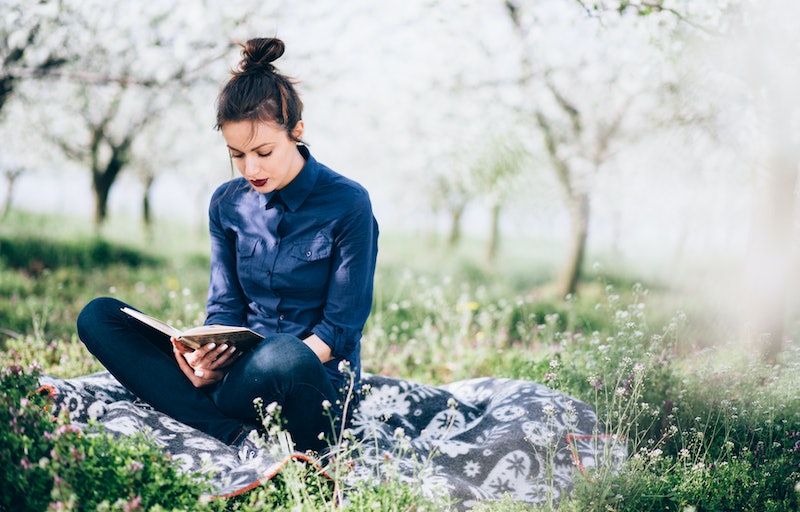 In the literary battle of the sexes, it seems that women have at least one victory in our column. According to a report from the National Endowment for the Art, women are more likely to read books than men. And yes, I know that reading isn't a competition — and neither is gender for that matter — but still. Pat yourselves on the back ladies.

Of course, it isn't all good news. According to the report, the percentage of American adults who have read a novel, play, or poem in the past 12 months has fallen to just 47 percent in 2012. That's down from the slight uptick to 50 percent that occurred in 2008, and a total of 56 percent in the 1980s. That isn't that great — though when you factor in nonfiction, more than half of Americans have read a book in the past 12 months that wasn't required for school or work.

When it comes to fiction, though, most readers have something in common: Most of them are women. About 55 percent of women have read a work of fiction in the past 12 months, compared with only 33 percent of men. Fewer women read nonfiction, but female nonfiction readers still outnumber male nonfiction readers. In fact, women make up a greater share of readers in just about any category, be it novel, nonfiction, short stories, poetry, or plays.

Like I said, you rock, ladies. Give yourselves a round of applause.

It's worth pointing out, however, that although women represent a majority of all readers — meaning we in fact are the default members of the reading public — the literary world still can be a very male-oriented space. Sexism in the publishing world is unfortunately still very much a thing, with female authors often not getting the respect or serious consideration they deserve. Furthermore, and perhaps even more egregiously given the number of female readers out there, books that are primarily enjoyed by women are dismissively termed "chick lit" and thus not worthy of serious attention, while novels enjoyed more by men are considered "mainstream" or "literature" or just given the neutral moniker of "fiction."

But as this report can pretty throughly demonstrate, this male-oriented approach to literature is no longer appropriate — if indeed it ever was. Women make up the majority of the reading public, and if the literary establishment doesn't learn to embrace fiction by and for women they are quickly going to become irrelevant. Fiction that's written by and primarily for women is not something that should be dismissed as "chick lit" but rather seriously considered in the same way that more "masculine" writing is.

Because it's not a man's literary world anymore.

More like this
Jessica Simpson On The Time She Was Pursued By A Backstreet Boy & An *NSYNC Member
By The Editors
Netflix Shut Down 'Bridgerton' S3 Rumours About A “Very Dark” Storyline
By Bustle
We’ve Entered The Hot Boy Reader Era
By Samantha Leach
25 Inspiring Quotes From Black Women To Celebrate Black History Month
By Kyli Rodriguez-Cayro and JR Thorpe
Get Even More From Bustle — Sign Up For The Newsletter
From hair trends to relationship advice, our daily newsletter has everything you need to sound like a person who’s on TikTok, even if you aren’t.