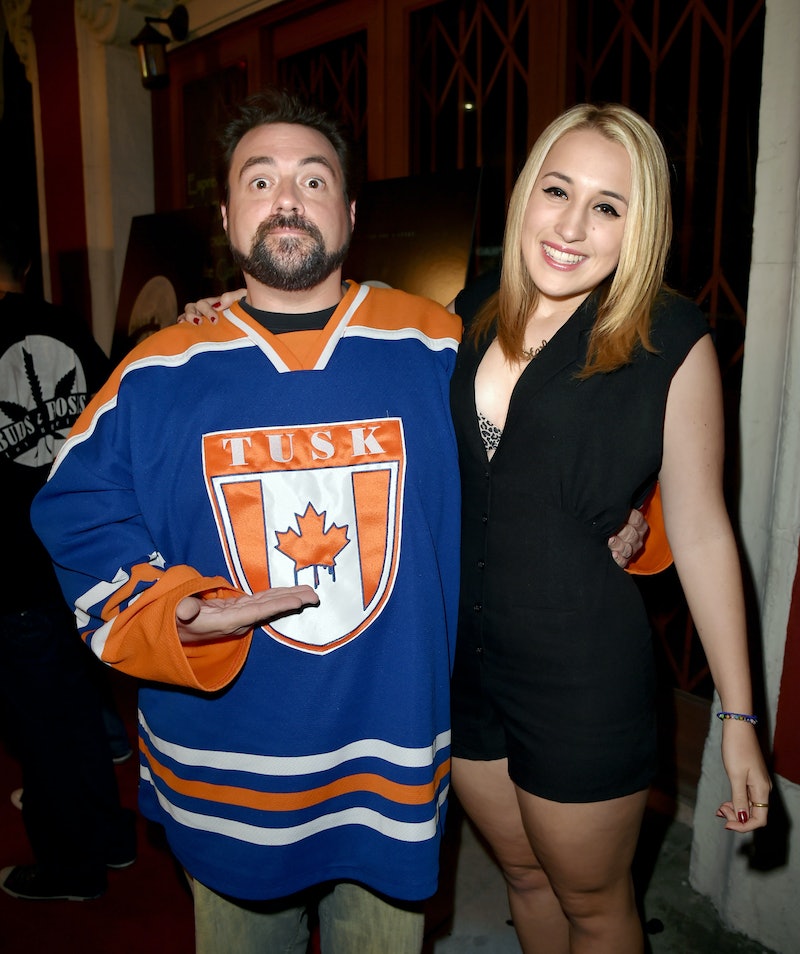 I’m not sure any 17-year-old girl on the planet would get along working with her dad as well as Harley Quinn Smith does with her father Kevin Smith. After working together on 2014’s Tusk, which Smith directed, the dynamic duo is back at it with the spin-off film Yoga Hosers, also starring Smith’s best friend Lily Rose Depp. While speaking with Smith days before the film’s premiere, she assures me that she and her dad never butt heads. Maybe while doing press, because, according to the 17-year-old, he “talks so much in real life,” but after working on this film together, she grew a deeper appreciation for her father than she could’ve ever imagined — his Sundance speech on “surround[ing] yourself with women when you make a movie,” included.

One would assume working with all parents (Smith’s mother produced the movie and both of Depp’s parents had cameos), grandparents, siblings, and nannies would be semi-awkward for a teenager, especially when dealing with miniature bratwurst clones that emerge through victim’s buttholes to kill them. But Smith says just the opposite. “That’s a pretty unique and special experience. It was just so much fun all the time,” she says. She not only evolved from working with her dad, but of course, Johnny Depp.

“There was one scene I could not hold it together… We could not stop laughing and Johnny was straight-faced the entire time,” she says. Anyone who’s seen the movie would know which scene she’s referring to. Although she admired his ability to stay in character throughout the most ridiculous takes, the reality of working with such a huge Hollywood icon didn’t sink in until after-the-fact. “I never in my entire life thought of him as one of the greatest actors in the world, which he is. I always just thought of him as my best friend’s dad,” says Smith. It’s casual.

“Anyone else I’m sure would’ve been overly intimidated by his immense talent… It’s completely surreal that I would get to work with him ever, let alone on my first movie,” she says. But perhaps the man who really took Smith under his wing was her pops. “I got to know my dad on a whole other level than father-daughter relationship,” she explains. “I got to know him as an artist, which was very special because I never really understood the extent of what he did and we both shared such a profound respect for anything involving art.”

“It was so surreal to get to work with him and get to know him as this entirely different person than I had previously known him as—[I have] a whole other level of appreciation,” Smith continues. Speaking of appreciation, I had to ask the actress about the epic comment her dad made about the importance of working with women while promoting the film at Sundance.

In attempt to paraphrase her dad’s claim, she says: “Women are the center of creation since they produce lives… They can do just as much [as men] or perhaps more in involving creation since they know so much about it.” It’s evident her dad’s beliefs and practices have given her incredible values.

“I just think that no matter what it is in life, it’s important to have an equal balance of men and women because, why the hell not? Men and women can do the exact same things, it makes no sense to leave one gender out and have an abundance of the other,” the actress explains. Although she knows entertainment is “so overly men-dominant,” she’ll fight for roles and equal representation so other girls out there have hope. “Any other girl can look at it and say, ‘Hey, I can do that as well. I can do the same thing.’” she says.

Props to Mr. Smith, who not only created a kickass movie star in-the-making, but an intelligent woman who wants to make a difference.

Yoga Hosers is in theaters now.