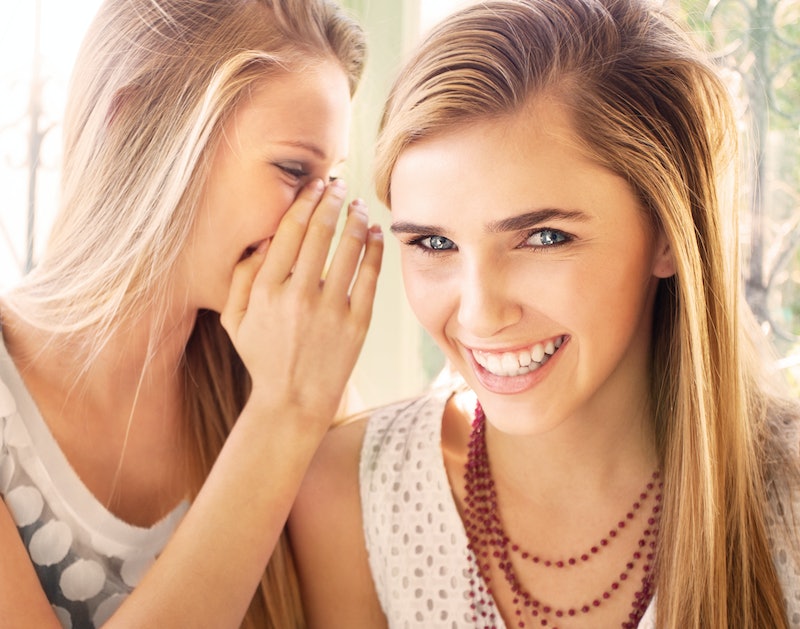 It's back-to-school time, and with it comes another very special (and for many people, equally dreaded) time of year: sorority rush. For those going through it for the first time, recruitment (as it's preferred to be called) can be a very confusing experience — waking up early, being ushered into lines and herded into houses of singing girls, talking to strangers for hours on end. But it doesn't have to be! I may have graduated college a couple of years ago (*tear*), but I can still vividly remember all my worries going through recruitment as a potential new member (PNM for short) — or, person going through recruitment hoping to join a sorority. So I've compiled a list of what potential new members should know about recruitment before going in. I can't guarantee these tips will help you get placed in your dream house, but they can make the whole process a little less daunting.

Look, we get it. At many schools, recruitment happens during the weekend and is an all-day affair, from 8 a.m. until God knows when. It sucks for you; it sucks for us. Nobody wants to be awake at the crack of dawn, sing-shouting into the faces of doe-eyed freshmen. We're all in this together.

2. We Are Also Nervous

It might seem so easy to participate in recruitment as an initiated sister, and in many ways, it is, but that doesn't mean we don't get nervous at the thought of talking to strangers all day, too. So don't feel like you're the only one.

If you get dropped from a house, it's easy to get upset and wonder what's wrong with you. The answer is nothing! Rejection is really not personal. We talk to so many PNMs per day and have to make a snap judgment based on a five-minute conversation. We would love to be able to have the time to really get to know everyone who walks through the door, but it just isn't possible. So don't feel like not being invited back to a house is a reflection on you as a person — it's absolutely not.

I'm not going to say that each organization doesn't have a particular reputation on campus, but I will say that once you join a sorority, you'll realize that the stereotypes don't really matter. They seem like a huge deal from the outside, but once you're in it, you really don't spend much time thinking about your house's stereotype — or the reputations of other houses, for that matter. So don't base your decision on reputation (which you shouldn't do anyway, but still).

5. We Also Get Tired Of Talking About The Same Things Over And Over Again

Are you tired of talking about your major and extracurricular activities? Us too! Additionally, while as a PNM there's certainly the pressure to impress and you'll feel like you're on a series of job interviews, as an initiated sister we feel pressured to constantly be coming up with new and interesting questions. The point is, it's uncomfortable all around, and a little variety will go a long way. Thinking of a few talking points beforehand — other than your major or where you're from — is a good way to keep things interesting for both parties.

6. Do Some Outfit Research

When I look back on the outfits I wore throughout recruitment, I cringe. I really had no clue what to wear — one day I wore jeggings and a regular short-sleeve shirt. That's not to say that the sisters will be openly judging you on your outfit (at least, they shouldn't), but I could have found a way to express my personal style. A quick Google search will do the trick to give you a ballpark, but don't obsess over it.

7. Don't Listen To Other People

Joining a sorority is a decision you should make yourself because it's what you want to do. Don't let others discourage you or sway your choice. At the end of the day, this is your choice to make, and your sisters to spend the rest of college (and beyond!) with.

8. Know What Topics Are Off-Limits

At my school, there were four no-no conversation topics: boys, booze, Barack, and bucks. In other words, don't talk about hookups, drinking (especially if you legally are not allowed to drink), politics, and money. Think of it like a first date — if you wouldn't bring something up on a first date, save it for after recruitment.

9. Give Every House A Chance

It's normal to have your sights set on a house — many people do, even if they don't admit it — but don't get tunnel vision. You never know what will happen during recruitment or who you'll connect with. So give everyone an equal chance. There's a very good chance you'll be surprised.

Yes, it's cheesy, but it's true. Don't try to fake it — we can tell. This is for the PNM's benefit as well. You're going to be spending the next three to four years with the sisters in whatever house you choose. Nobody can keep up a fake personality for that long, and you won't get as much out of your friendships if you're not genuine.