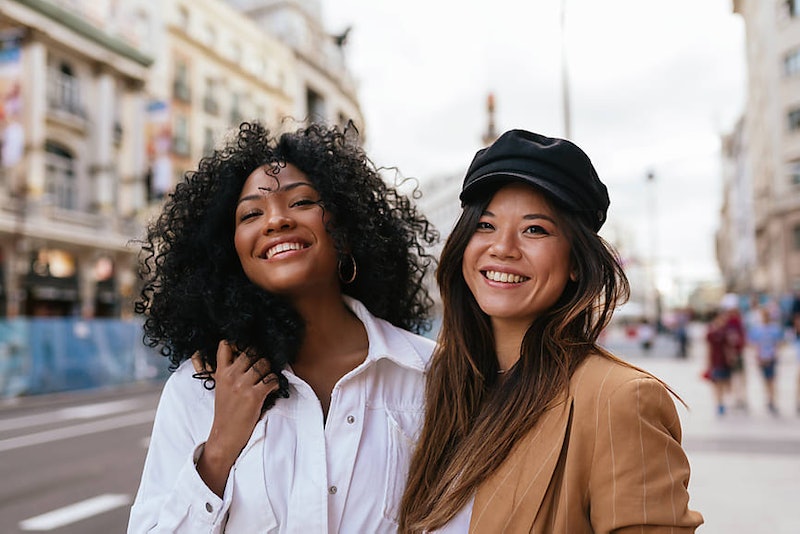 "What can I get you girls?" It's one of the first things my friends and I always hear when we're ordering something in a restaurant or bar. Men of all demographics use the phrase, as do a lot of women. It's become so common that I don't even flinch at it anymore, even if it's something I don't particularly love hearing. If you really think about it, though, addressing a grown-ass woman as a girl is pretty problematic, and it's about time we considered nixing the word from our vocabulary entirely.

Let's get technical for a second and talk about the definition of "girl." According to Dictionary.com, "girl" means "a female child, from birth to full growth," or "a young, immature woman." That basically rules out most women reading this, since we're adults. Regardless, our society loves tossing around the term "girl," no matter how old the women they're referring to are. We hear it in all kinds of contexts — in songs on the radio, from friends and family, and even at work from our superiors. Most of the time, the term is used endearingly, but that doesn't make it any better. It harbors a larger meaning which reflects just how much our society fails to respect women.

1. It Makes Women Into Children

A girl is a person under the age of 18 who still lives with their parents. So when you use that term in reference to a successful woman who has worked hard to get where she is today, you're ignoring her accomplishments and diminishing her maturity. It also implies that she needs to be looked after or taken care of, like a silly tween who needs guidance from her camp counselor.

Keep in mind that the dictionary defines "girl" as "a young, immature woman," so if you constantly hear your boss or partner speaking about you and other women this way, that says a lot about how much they value you — and it isn't right. You don't deserve to be infantilized by anybody, unless you like being called a girl.

2. It Has Creepy Sexual Undertones

When a woman is catcalled on the street by a random guy, the leers tend to be kicked off with some variation of "Hey, girl!" In run-of-the-mill romantic comedies, the protagonist always talks about "getting the girl." Similarly, in the famous (and hilariously accurate) Mad TV skit "Can I Have Your Number," Darrell tries to coax Yvonne into giving him her number by insisting, "Don't be insecure, girl. Work that ponytail!" In other words, men use the term "girl" when they're crudely hitting on women or objectifying them — all while infantilizing them. It also sexualizes actual girls.

3. It Perpetuates Our Unhealthy Obsession With Youth In Women

Everywhere you turn, women are constantly being sold products they can drink or slather on their faces to make them look younger. Our society is obsessed with maintaining women's youth, and men are constantly chasing after younger women — so much so that 37-year-old Maggie Gyllenhaal was once deemed "too old" to play the love interest of a 55-year-old man in a Hollywood movie. This is a theme we've become so used to that we no longer bat our eyes at it. As a result, women put tremendous expectations on themselves to remain youthful, even though aging women are beautiful and wise.

It's a sexist tune that is only perpetuated further when men regularly refer to women as girls. It's almost as if they want us to look like girls and act like girls, because that's when we're most attractive to them. Many men are threatened by the idea of a powerful woman who has her shit together, so they'd rather reduce us to childlike beings who are cute and helpless. Where are all the romances in which the man falls in love with the woman who is strong and independent? We'd like to see more of those movies, please.

4. There Is No Male Equivalent

Some might try to argue that we address men as "guys" all the time, but that's not the equivalent to women being called girls. Merriam-Webster defines guy as "man, fellow." There's nothing age-specific about it, so when the word is used on men, it doesn't bear the same patronizing, infantilizing undertones. For women, though, there is no term out there that can serve as a stand-in for "guy." We're simply referred to as girls or women, while men are called boys, then guys, then men.

After high school graduation, you likely won't hear your brother and his friends being called "boys" by anyone other than your mother. Have you ever heard your male co-workers called "boys" in an important meeting by their boss, for instance? Doubt it. They're called guys or men, neither of which carry a loaded history of sexism.

In fact, if you were to call a group of grown-ass men "boys" when they're going about their lives as adults, they would probably take offense and demand that you take it back. Yet they'll turn around a second later and ask "the girls" what they want to drink. It's a senseless exchange, and it's one that men will never truly understand until it's explained to them, which is why parents should raise the boys of this next generation to never use this term when talking about women.

5. It Prevents Us From Treating Each Other As Equals

Language isn't a petty thing. It plays a significant role in how we see the world, how we treat one another, and how we make sense of ourselves. When a group of adult women are waved off as a bunch of girls, we feel like we're being talked down to in a condescending way. This may sound like something minute, but when it's done over and over again it takes us further away from ever feeling like we're considered as worthy and adult as men.

We're not children. We're not youngsters who need help in order to get through the day. Stop talking to us like we are so we can finally see one another as equals.