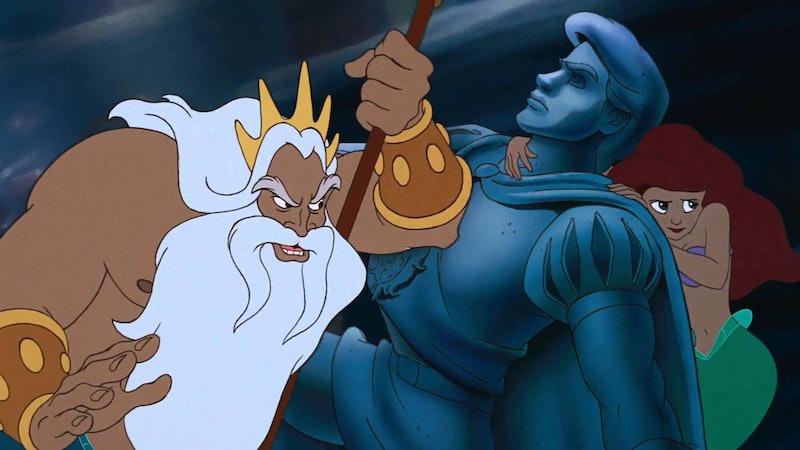 When I was a kid, the annual father-daughter banquet at my church totally creeped me out. I couldn't put my finger on it at the time, being an inarticulate teenager whose primary concern was avoiding all social contact that wasn't AOL instant messenger. But I knew something about the whole event made me feel icky. It wasn't until years later that I realized how the idea of the domineering father with his delicate little flower of a daughter is directly connected to the rape culture we're surrounded by today.

Overprotective dads make for good jokes in Hollywood. It's a popular trope that doesn't seem to be going anywhere anytime soon. Robert DeNiro in Meet the Parents, the crazy father from 10 Things I Hate About You, Bernie Mac in Guess Who — their paranoia and comically conservative ways crack us up. We're never really given time, though, to ponder the implications of their actions in their daughter's life once the credits roll.

It's not an easy thing to talk about, because dads often act this way out of genuine love for their daughters — but that doesn't mean there are no consequences. Strict dads leave their daughter feeling like she has no agency over her own body or her own life. They give life to the screwed-up idea that women are fragile, weak beings who should tame their sexuality if they want to avoid rape. At the end of the day, stern parents might be doing more harm than good.

1. They Perpetuate The Idea That Women Can Be Owned

The average person would say that a dad's heart is in the right place when he forbids his daughter to date anyone who hasn't come to his house and asked for permission. However, this seemingly paternal expectation is rooted in the ugly history of men owning women as property. The whole idea of a father "giving away his daughter" by walking her down the aisle — or letting her go on a date, or giving his blessing to let her get proposed to — comes from the concept of a dowry.

While the majority of dads in Western society today aren't exchanging their teenager for cows, there is still a sense of ownership that colors their overprotective ways. And this possession plays out dangerously in a sexual setting. The idea of ownership makes men feel comfortable enough to take advantage of a woman, and if a woman grew up in a household where she felt like she belonged to another man, she may not even be equipped with the tools needed to even recognize what is and isn't sexual abuse.

2. They Don't Teach Young Women How To Speak Up For Themselves

Don’t get me wrong: Every woman deserves a community of family and friends who looks out for her and cares about her safety. However, there is a big difference between wanting to protect a woman from sexual assault and shielding her so much from the world that she never learns how to protect herself.

By constantly sheltering girls from boys, overprotective fathers fail to teach their daughters how to make definitive decisions in romantic or sexual situations. If someone has been speaking on your behalf for most of your teenage years, it will become extremely difficult for you to know when you want to say yes or no. This could result in being confused about the true meaning of consent.

Additionally, most of the time, overprotective dads are the ones who cut off their kids to say, "Because I said so!" They think they're teaching discipline and respect, but what they're really doing is robbing their children of the chance to speak their minds. A girl who grows up around that environment will probably have trouble being assertive with how she's feeling in a sexual situation, a trait we need to be experts at.

3. They Discourage Girls From Expressing Their Sexuality

One of the most destructive facets of rape culture is the idea that an overtly sexual woman invites sexual assault. Most parents do everything they can to teach their daughter moral boundaries. They don't let them post inappropriate photos of themselves; they chaperone which personalities they're following on Instagram. This is all well and good, but when it's taken too far, girls don't ever come face to face with their own sexuality.

Hate to break it to you, dads, but you've gotta realize that every person is a sexual being, including and especially your daughter. Kids and teens deserve the personal space to negotiate their emerging sexuality, and an overbearing parent doesn't grant that freedom. Furthermore, those lectures you keep giving your kids about purity pave the way for a women feel shameful about her sexuality, which only keeps rape culture alive.

4. They Reinforce The Notion That Men Are In Charge

The wisecrack about the dad waiting to meet his daughter's date with a shotgun in his lap still makes the average person laugh — but it should make us cringe. It's a reflection of our still-existing patriarchal values, like how the father is the "man of the house" who has the final say on who the daughter can date and marry, and that he is willing to resort to violence.

Many of us who witnessed overbearing parents as kids hold onto the belief that the man is the one who barks the orders and runs the show. So when an overly arrogant dude forces or pressures his girlfriend sexually because she's not giving him exactly what he wants, something from childhood in the back of her mind may actually tell her that it is normal.

5. They Make Girls Think It's Possible To Provoke Sexual Assault

Keeping a close eye on what your daughter wears is a cliche we still find amusing, like that scene in every family sitcom when the dad forces his tween to go upstairs and change her too-short skirt (hey, Haley in Modern Family). We teach girls that what they wear and how they present themselves to the world means a lot. That's true to a certain extent, but there's a darker side to this.

Overprotective parents patrol what young women put on their bodies because they don't want them to send the wrong message — that they're promiscuous girls who are searching for sex. So many disgusting excuses for rape are rooted in the belief that tight dresses and low-cut tops are invitations for sexual assault, when the only thing that signifies consent between two people is a clear-cut, verbal yes. It has nothing to do with a woman's fashion choices.

All parents would do their children so much good if they would stop teaching them that "revealing" clothes are somehow cause for sexual abuse. In fact, rethinking all of the strict boundaries they put around their daughters would be helpful to their developing into strong women, because even the most good-hearted endeavors can cloud the way they think about sexual assault and their place in the world.