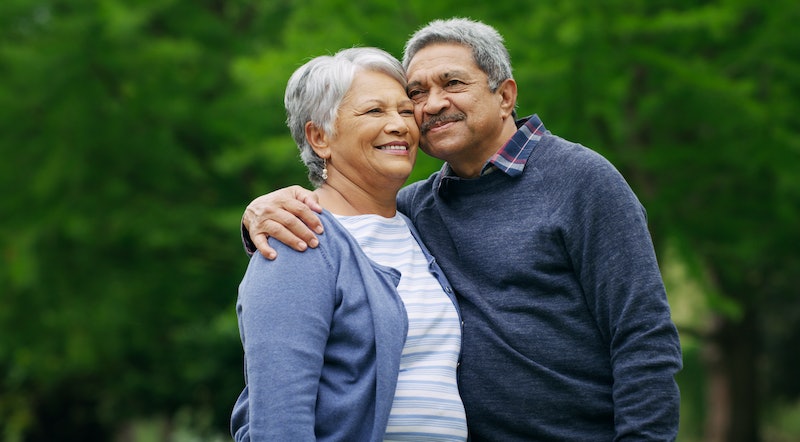 Although women live longer and therefore account for the majority of the older population, they are largely ignored — or, at best, viewed through the lens of ageist gendered tropes that our culture unfairly perpetuates. These gendered scripts serve as constraining descriptors for an entire demographic of women who have much to bring to the cultural conversation, but who are reduced with regularity to "sweet" or "zany" caricatures and unfair generalizations. They are the proverbial old maids and reclusive spinsters. This equates to a sort of double jeopardy for women, who wind up on the receiving end of both ageism and sexism. Of course, such tropes are woefully provincial and can lead to troubling real-life consequences.

The semantics of aging and gender can be a touchy subject — sometimes, the things we think are complimentary are in fact far from it, and no one really likes to hear that they've inadvertently been insulting anyone... particularly when their primary intention was simply to say something kind. But language is powerful, and it's important to be self-aware. It's easy to get defensive reading a list of compliments that are actually ageist insults or, like the following, ageist gendered tropes we're all probably guilty of perpetuating at some point or another in our lives. Addressing problematic language and stereotypes isn't an attack on anyone, though. Rather, it's an attempt to further the conversation and serve as a reminder that people are constantly evolving. Language should too.

In that spirit, let's explore seven ageist gender tropes that should be given the slip.

All too often, older women are depicted as a vulnerable subset of society in need of protection and routine assistance from others. They are endlessly needy old ladies characterized as unhealthy, feeble, and at times, comically senile (how is that even a thing?!). Naturally, this perpetuates the stereotype that older women are sweet, yet incompetent people who deserve our pity. The reality is that women live, on average, seven years longer than men and are enjoying more active lives than ever as we age. By painting the picture of older women as helpless victims, we're contributing to a narrative that makes it easier to marginalize the contributions of such women — not to mention, it increases the odds that older women will internalize these expectations.

See also: "old maid." While these cliched phrases may not seem outright malicious, they belong to an insidious class of pejoratives which imply that — for women — youth and beauty are mutually exclusive. They refer to a woman who is considered physically undesirable or unattractive based on her looks alone, whereas older men get the benefit of becoming more "distinguished" with age. Real talk: We all age one day at a time, and beauty is not on a sliding scale that dips as the days go by. These outdated phrases should be put to bed.

We're all familiar with this one, right? It's the portrayal of the older women "tut-tutting" the youth of the world or silently judging with her lips patronizingly pursed. It's the depiction of an older woman who is inherently self-righteous and feels superior to anyone who fails to subscribe to her beliefs — which, as it were, are often characterized as overly antiquated. This sort of demonization is clearly an unhealthy model to endorse, as it does little more than foster exclusion. Besides, studies show that older people have higher levels of mental resilience, making them more likely to ditch bad behaviors, habits, and attitudes.

Can we please give this one a rest? It's so disheartening to hear the same tired jokes about the sexually frustrated older woman who hasn't had sex in so long "she's got cobwebs." Or, perhaps worse than sexually frustrated, the older woman who is entirely devoid of any sexual impulses or desire. It's one thing for a woman to choose an asexual lifestyle; it's another entirely for that lifestyle to be arbitrarily assigned to all women over a certain age through the gendered trope of the sexless spinster. A more accurate portrayal would be of the older women who not only enjoys sex, but enjoys it on her own terms — a study by the National Commission on Aging shows that women find sex over 70 as or more physically satisfying as they did in their 40s.

We can't really talk about the sexist spinster trope unfairly forced on women without also addressing the sexuality driven, ageist gendered trope men are saddled with — that of the dirty old man. Unlike women, men are often portrayed as maintaining their sex drive as they age. But whereas the rare caricature of the sexual older women (aka "the cougar") has fairly positive connotations, the portrait of the sexual older man suggests some sort of deviance. And while there arguably are indeed dirty old men out there, it's wrong to imply all sexual older men are perverse, or that being a sexual older man is unnatural. Also, playing up the stereotype of the naughty old grandpa squeezing the tushes of younger women and whispering off-color comments in their ears excuses harmful sexist behavior.

To be a woman in the workplace is to be exposed to gendered ageism at nearly every stage of your career. In the beginning, you're the naive intern flitting about haplessly and changing coffee filters. In your 20s and 30s, you're the soon-to-be stay-at-home mom or the "working mom" whose potential to become pregnant or decision to do so inexplicably defines your aspirations. And as you get older and rise in the ranks, you fall under perhaps the most popularly perpetuated of these ageist umbrellas: the ruthless boss. Older women are often viewed as flinty, unforgiving employers blazing a trail in the industry at the expense of any softness they may have once possessed. She is hard because "she has to be." Such social valuations somehow don't apply to men who — exhibiting the same behavior as hardworking senior-level women — are hailed as leaders, pioneers, or antiheroes.

Although ageism is often discussed in context of older women, it is a form of discrimination that can strike women of all ages. And one such demographic who is seemingly always subjected to gendered ageism is the teenage girl. Think about it — teenage girls are routinely depicted in pop culture as twits or ditzes. They flip their hair and they toss out 27 "likes" in a single conversation. In horror movies, when a masked killer breaks in through the front door, they run (often scantily clad) upstairs and render themselves sitting ducks. It's time teenage girls got a little more credit, eh? Many teenage girls today are socially conscious, politically active, and have much more to offer than gum-popping or the well-time hair twirl.