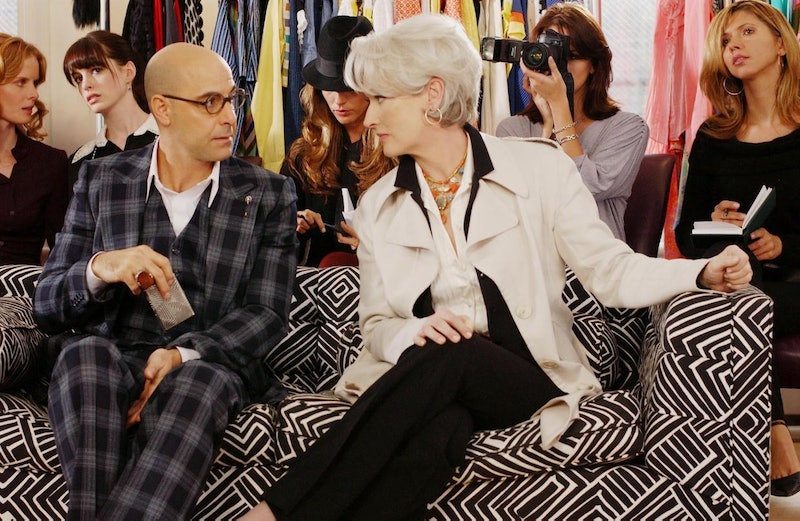 Sometimes top-of-the-line material is better off left alone. Or, at least, that's what The Devil Wears Prada actor, Stanley Tucci, had to say about the possible continuation of the 2006 hit comedy during an interview with The Hollywood Reporter. In an attempt to preserve David Frankel's already successful interpretation of Lauren Weisberger's best-selling novel, Tucci revealed that he believes there's no need for a Devil Wears Prada sequel. This is despite the fact that Weisberger herself has already published a highly-successful sequel to the adapted novel, Revenge Wears Prada: The Devil Returns. As with most book series-turned-movies, a successful book and a movie are still not enough guarantee high quality.

According to the actor himself,

[A sequel] never going to happen. That role [Nigel] was so great because it was so beautifully written and he was incredibly funny and there was a real substance to it. It [The Devil Wears Prada] was a truly great American studio movie in every way. Perfect in every way… Sometimes it’s best just to leave things. If you try to redo it, let’s face it, there are very few sequels that actually work.

Of all of the Devil Wears Prada cast members who have spoken about a potential sequel, Tucci's comments that hurt the most. Especially since he's the only actor to maintain a leading role in successful book-to-screen series that has survived its entire big screen adaptation. As Caesar Flickerman in all four installments of The Hunger Games, Tucci beat out Anne Hathaway's run as Mia Thermopolis in The Princess Diaries, considering the fact that only two Princess Diaries movies were made out of the original 11 book series.

Tucci also seems to be the only cast member from the original film who has spoken out against the idea of a sequel. In fact, Anne Hathaway told The Graham Norton Show in 2014 that she would "love" a sequel. Tucci's thoughts on hoping on board for a sequel directly affect Emily Blunt's potential for signing on to the project as well. The actress told E! News that she, "would do it, but only if everyone did it." As for the film's very own Academy Award winner, Meryl Streep, she's not completely ruling it out either. But her statement to Access Hollywood was that she would, "have to lose the [expletive] weight" first, so it seems like she would like some forewarning before any sequel is guaranteed to be headed our way. Thus, Tucci is only main character actor opposed to the idea.

As much as I hate to say this, maybe the actor does have a fair point? When it comes to a classic success as good as The Devil Wears Prada, I would hate to see its legacy tarnished by a less-than-satisfying sequel. But, if David Frankel and Lauren Weisberger want to team up once again to bring her second novel to life, I also wouldn't be completely opposed. They pulled it off once, so how do we know that magic can't happen all over again? If they do, then here's to hoping Stanley Tucci would be on board anyway. I sure need more Nigel in my life.

More like this
A 'Bridgerton' Star Just Dropped A Major Hint About Joining The Live-Action Barbie Cast
By Bustle UK
10 Must-Read New Books Out This Week
By K.W. Colyard
Fans Of 'Anne With An E' Will Recognise 'Stranger Things’ Vickie Immediately
By Rachel Mantock
'Derry Girls’ Dylan Llewellyn Will Star In C4’s New Queer Comedy
By Rachel Mantock
Get Even More From Bustle — Sign Up For The Newsletter