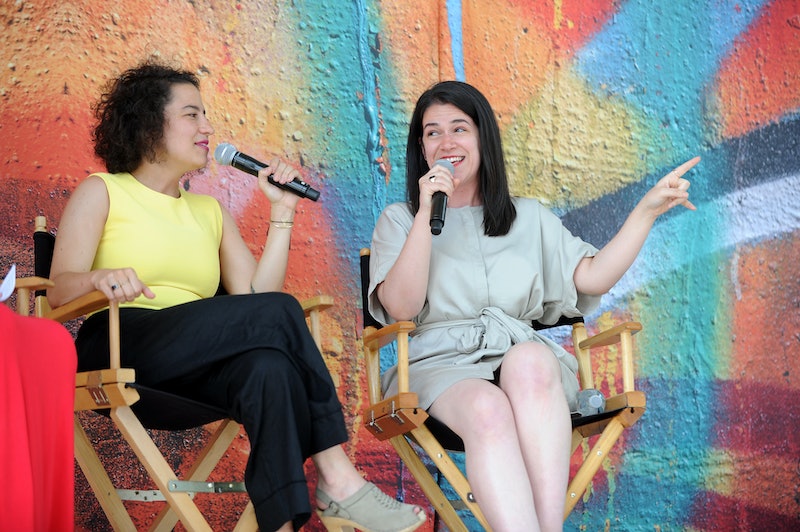 Heads up, Broad City fans: I've got a reading recommendation from your favorite funny ladies. In an all-new skit, Abbi and Ilana promote Phoebe Robinson's new book, You Can't Touch My Hair: And Other Things I Still Have to Explain, out this fall from Penguin USA.

A writer, comedian, and actress, Robinson co-hosts 2 Dope Queens with Jessica Williams, and is also the creator of the Sooo Many White Guys podcast. She has appeared on Last Comic Standing and Totally Biased with W. Kamau Bell. Robinson's writing has appeared in The New York Times, bitch, and The New York Post. You Can't Touch My Hair is her first book.

In their promotional video, Abbi Jacobson and Ilana Glazer "read parts of [their] favorite, most relateable essay" from Robinson's book: "How to Avoid Being the Black Friend." As you might expect, things don't go according to plan. When Robinson appears to drive home the Broad City stars' awkward realization that they are not, in fact, "the best fit to represent that particular essay," Abbi and Ilana wind down their skit with the concession that maybe they should have read the chapter on Michael Fassbender's penis instead.

Phoebe Robinson's new book, You Can't Touch My Hair: And Other Things I Still Have to Explain, is available for pre-order now. Pick it up from your favorite retailer on October 4.

More like this
17 Hilarious British Comedies On Netflix
By Sophie McEvoy and Sabah Hussain
Selma Blair Wrote Through The Pain
By Samantha Leach
Watch The Emotional Trailer For Dolly Alderton’s 'Everything I Know About Love'
By Bustle UK
The 20 Best Audiobooks To Fall Asleep To
By Aoife Hanna and K.W. Colyard
Get Even More From Bustle — Sign Up For The Newsletter