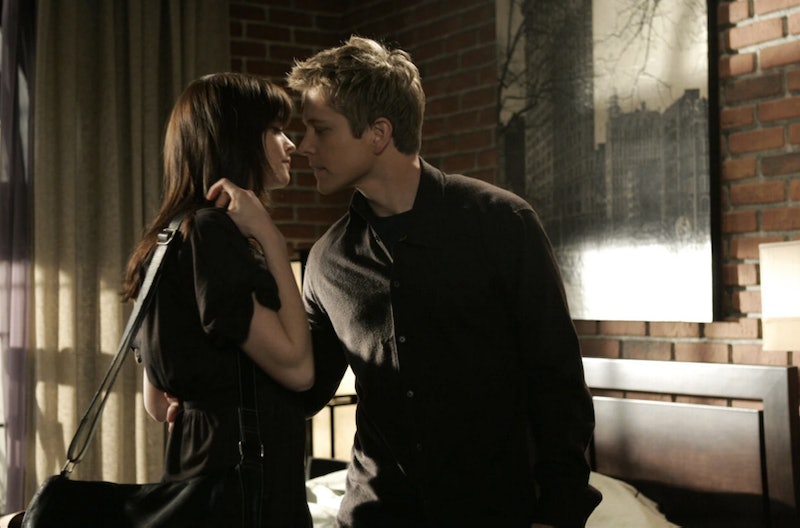 Hang on to your umbrellas, because the Gilmore Girls Netflix revival is dropping hints like there is no tomorrow. And I don’t know about you, but I’m trying to hang on for dear life and enjoy the fall. You know, kind of like Rory did in that episode where she was inaugurated into the Life and Death Brigade. And speaking of which… this time the Gilmore Girls Instagram account has posted a photo from the revival that has all of Team Logan’s tongues wagging. Not only is it a major throwback to the days of Rory, Logan, and the Life and Death Brigade, it has all of us wondering if this means that Logan will be playing a much bigger role in the revival than any of us thought.

To be fair, it was already looking kinda likely that Logan would be making a pretty big splash in the revival. He's already claimed a spot in the last two episodes (um that’s a lot, considering Jess and Dean were only on set for a few days). Hanging around for the finale could spell big things for this character and the role he ultimately ends up playing in the revival. But that’s not the only thing that has Team Logan fans going crazy. Oh, no, there is plenty more where that came from.

In addition to all of that buzz, there were also a number of behind-the-scene shots that former Life and Death Brigade member, Tanc Sade (who played Finn), posted on social media during the last weeks of filming. It’s not guaranteed that the last scenes were what the production team were shooting then, but, considering how long the Life and Death Brigade members seemed to be needed on set, there could be a lot of screen time for these guys, including Logan.

But if this most recent Instagram photo is any indication, the Life and Death Brigade (Logan included) could be playing a major role in the revival. Think about it: All the photos posted to the show’s Instagram account so far have teased some pretty big things from the Gilmore Girls archives. Things that the revival really wouldn’t be the same without: Emily Gilmore, Hep Alien, Luke’s coffee, and Kirk’s crazy business ideas. The fact that they are also teasing the Life and Death Brigade (and Logan’s relationship with Rory) has me thinking that Logan is going to be a big part of these four new episodes.

Sorry, Team Dean and Team Jess. My guess is that all signs point to Team Logan getting the most action out of these new episodes.