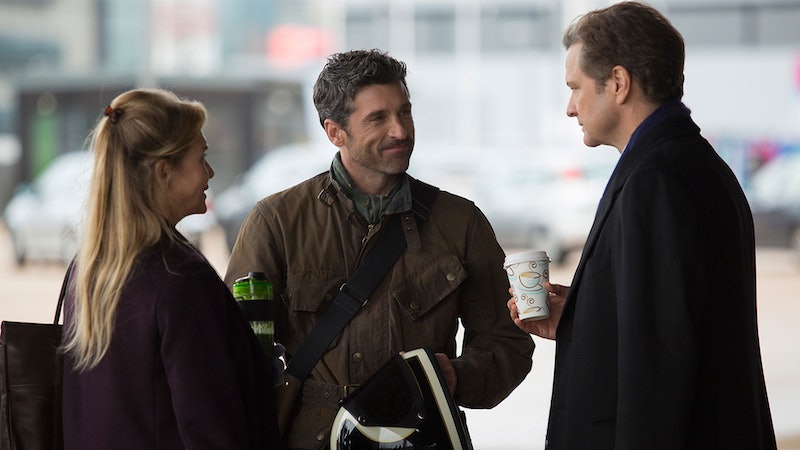 Whether you obsessed over the original movies when they were released in the early 2000s or you're just hopping on-board the Bridget train now, chances are that you're pretty excited for Bridget Jones' Baby, the long-awaited third movie in the franchise. Out Sept. 16, the film is a welcome return to the series, with Renee Zellweger reprising her beloved character and, like usual, two men — Colin Firth and Patrick Dempsey — vying for her affection. Although in this case, there's a twist not seen in the earlier films: Bridget is pregnant, and, as the movie's poster and trailers have made clear, she's not quite sure who the father is. If you, too, are dying to know who's the father of Bridget Jones' baby, I've got you covered — but beware, major Bridget Jones' Baby spoilers ahead. If you haven't seen the movie yet, you might want to wait until you do before reading

You ready to know all the secrets about Bridget Jones' Baby? OK, here goes: the guy who impregnates Bridget is.... Mr. Darcy! Yes, Firth's much-adored character is the father of Bridget's baby, and at the movie's end, he's seen happily raising the boy (who looks just like him) alongside Bridget. Fans of the adorably stuffy British lawyer might be breathing sighs of relief right now as, after all, many people are convinced (rightfully, in my humble opinion) that he's Bridget's one true love. And the movie seems to share this view, ending with a scene of Bridget and Mark's wedding, in which their one-year-old son is in attendance. (If you're hysterically crying by this juncture, trust me, you're not the only one.)

But of course, nothing's that simple in the world of Bridget Jones. Although Mark Darcy does turn out to be the father of Bridget's child, the other possibility, Dempsey's Jack Qwant, is shown at the movie's end to still be a major figure in Bridget and the baby's lives, which makes sense considering how involved he was during her pregnancy and how much he's seen to care for Bridget.

Qwant attends the wedding and holds the baby, William, at the altar; in a scene right afterwards, he plays with the child until Mark jokingly asks him to give the baby back. At the end of the movie, it appears that the three adults are in a truly good place with one another, despite all the confusion and anguish they experienced by not knowing which of the men had fathered Bridget's child.

Personally, I was thrilled to find out that Mark was the father, as I've always rooted for his relationship with Bridget (sorry, Daniel Cleaver). Still, how great would it have been to see a baby with McDreamy's hair?