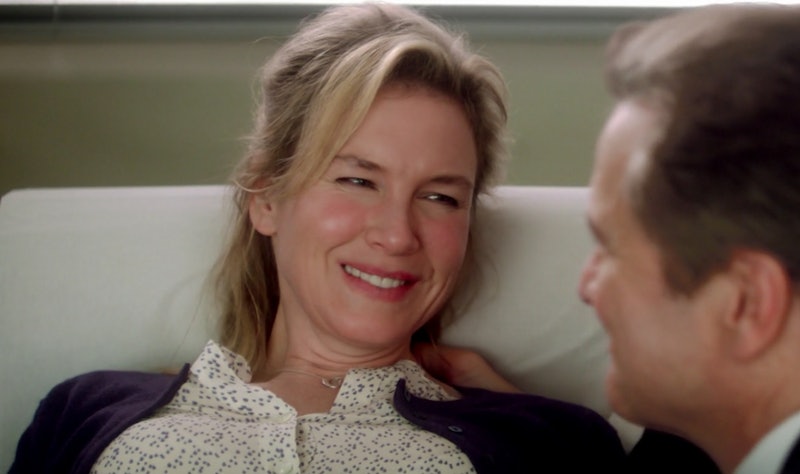 Bridget Jones is back, and this time... it's personal. OK, maybe it's not personal, but Renee Zellweger's British single lady is indeed back for her third film, Bridget Jones's Baby. It's been a long time since fans have seen Bridget in theaters — 12 years, to be exact. The first film, 2001's Bridget Jones's Diary, was based upon the novel of the same name, by Helen Fielding. As was the film's sequel, Bridget Jones: The Edge of Reason, in 2004. But what about the new film? Is Bridget Jones's Baby based on a book?

Nope. While there is a third book in Fielding's series of novels, it's not called Bridget Jones's Baby. Instead, the book is Bridget Jones: Mad About the Boy , and it doesn't share a ton in common with the new film. While the movie has Bridget expecting a child with either her old flame Mark Darcy or new fling Jack Qwant, the book actually picks up well after anything that happens in Bridget Jones's Baby would have taken place. That's because in the book, Mr. Darcy has been dead for five years. However, before that time, he and Bridget got married and had two children. The book focuses on Bridget, now a widow and single mother in her 50s, navigating life as a "born again virgin." So since it's not based on the third novel, where did the new film's story come from?

Before fans ready their pitchforks and torches, let me say this: Fielding helped write the film. The author is one of three people credited with the screenplay, along with Dan Mazer and Emma Thompson, so there's no blasphemy going on with the studio cruelly taking the character away from its creator. Fielding began work on the movie began way back in 2009, when it was first announced that the script would be based upon some Bridget Jones columns she had written for The Independent back in 2005 focusing on the characters attempts to have a baby as she entered her 40s, according to Ali Jaafar of Variety.