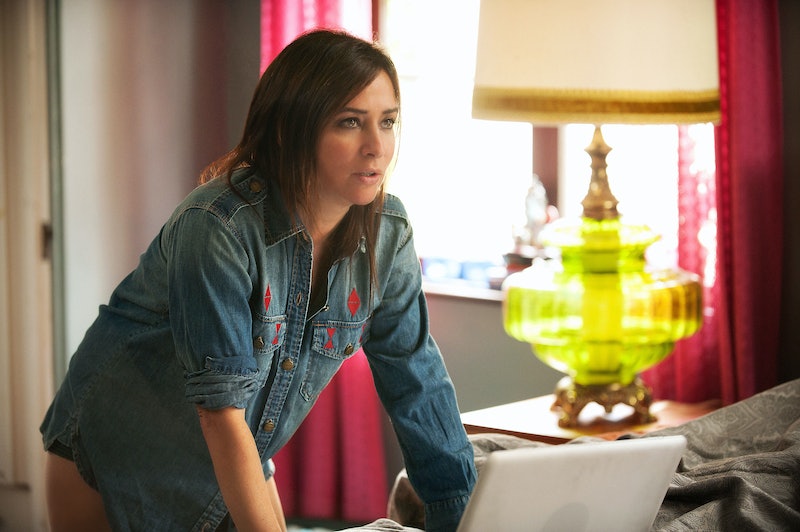 If you have been missing FX's Louie since it is on hiatus, then tuning into Better Things is pretty much required. Created by Louis CK and Pamela Adlon, the series is slightly similar in concept to Louie, so is Better Things based on real life? Like Louie focuses on Louis CK's character — a comedian and divorced father of two — Better Things focuses on Adlon's character Sam — an actress and divorced mother of three. Both Louis CK and Adlon have those real-life experiences like their TV counterparts, so it's totally natural to want to draw comparisons between Better Things and Adlon's life, just like you've probably done with Louie and Louis CK's life. However, even though the character Sam sounds a lot like Adlon, Better Things is not the true story of Adlon's life.

The real-life Adlon is obviously an actress, but has much more success in her career than the struggling Sam considering that she wrote and produced Louie and is doing the same for her own show. Adlon is divorced, as she noted in an interview with Deadline, and so she does have the same experience as Sam of raising her three daughters as a single parent. As Adlon told NPR about her real-life daughters, "The show is completely dedicated to them and all that they do, and the show really gives them a voice." (The three girls who portray her three daughters are actresses though and not her actual children.)

Yet, while the series is absolutely inspired by Adlon's own life, she made it clear in a first look video for Better Things that she is not Sam and the story isn't exactly like her life.

While from outside appearances the series seems to be a retelling of Adlon's life, the writer, producer, and actress begs to differ. In the above video, Adlon said that the series is "angsty, intense. It's completely different to my life. Laughing, she added, "And I don't relate to it at all."

I honestly wasn't sure if she was being sarcastic in that assessment, but from everything else Adlon says in the first look video, the main difference between her life and Sam's life in Better Things is really the drama of it all. She acknowledges the apparent similarities by saying, "I'm a single mom and I have three daughters and I'm deeply, darkly middle-aged," but that, "Sam is a kind of exaggerated version of myself." Of course, this exaggeration is what will help bring the laughs in this realistic comedy and though Adlon and her character share a similar name (Pam, Sam, anyone?), she said the way they handle problems in their lives is different. "She's a bit more of a loose cannon than I am. I don't really get upset in the way that she does," Adlon said.

One other notable difference between Adlon and Sam is their love lives. She said Sam is rough around the edges like herself, but that the character is much more naive when it comes to her own sexuality and the show will follow Sam "discovering herself sexually and romantically." Because, yet again like with the drama, what's a TV show without a little sex?

Adlon's personal life acted as a template for her new series, but that doesn't mean you should believe that every circumstance that Sam goes through is what Adlon has gone through — which is very similar to Louie. And just like how Adlon can relate to her own character, so can you since the series is based on regular, everyday moments. So while this is no "based on a true story" TV show, you will certainly identify with Better Things on some level when it premieres on FX on Sept. 8.