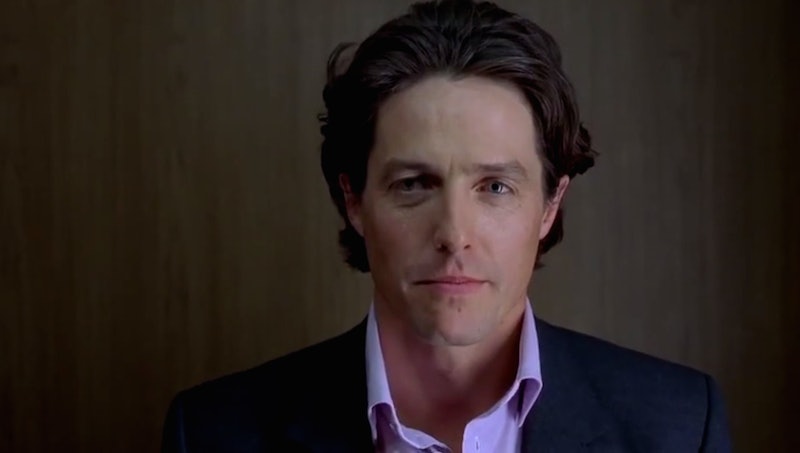 Although I, like many fans, was thrilled to find out a few years back that a new Bridget Jones movie would be coming to theaters, I was a bit disappointed to learn that Hugh Grant's character, Daniel Cleaver, wouldn't be present. Grant has said that he turned down the opportunity to be in the film, telling Bustle earlier this summer that when he was presented with a draft of a screenplay a number of years back, he "didn’t think the script completely worked," and despite attempts at revisions, he eventually felt that the filmmakers "should make it with someone else." So they did, casting Patrick Dempsey as the second man (alongside Colin Firth, of course) vying for Bridget's love. But for fans dying to know what happens to Daniel in Bridget Jones' Baby and how the movie explains Grant's absence, fear not — I've got you covered.

You ready to be spoiled, though? Be sure before you read on. OK, here goes: the reason that Daniel isn't present in Bridget Jones' Baby is because.... he's dead. Yes, really: in the world of Bridget Jones, Daniel Cleaver, ex-boyfriend of Bridget and publishing head, has passed away. His death, from a plane crash, is announced early on in the movie, when Bridget is shown attending his funeral, alongside her friends and many young women who are implied to have romanced Daniel before his death. At the funeral, Bridget gives a short speech about Daniel, joking that he'd constantly tell her, "shut up, Jones," and saying how much he'll be missed. Present in the audience to hear her is none other than her other ex Mark Darcy (Firth), and he and Bridget have an awkward encounter outside the church.

For the rest of the film, Daniel isn't mentioned — after all, Bridget Jones' Baby is a story about Bridget's romances with Mark and newcomer Jack Qwant (Dempsey), as well as her unexpected pregnancy, not her former relationship with Daniel. Yet his story isn't over, as the end of the film includes a short, funny scene in which Bridget reads a newspaper headline that says Daniel has been found alive over one year after his supposed death.

So what does that mean? Will Daniel, and thus Grant, be in more Bridget Jones movies going forward, if they're made? It's definitely possible, but then again, the news of Daniel's recovery might just be meant as a fun nod to fans who know that Grant chose not to be in the film. Still, if any other Bridget films do happen one day, it's nice to know that the door is open for Daniel Cleaver to make a return.