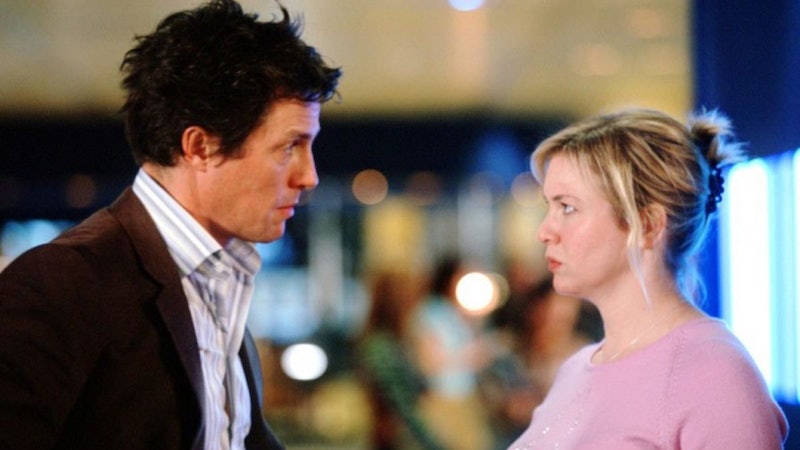 Much has changed on and off-screen since the last time an excerpt from the diary of British "singleton" Bridget Jones made it to theaters. In the third installment of the comedy trilogy, one corner of a familiar love triangle has been swapped out: Hugh Grant's character Daniel Cleaver, who doesn't appear in Bridget Jones's Baby . Renée Zellweger returns to the role that earned the actor her first Oscar nomination; and Colin Firth is back as proper barrister Mark Darcy. But instead of being caught between Mark's reliability and Daniel's rakish charm this time around, Bridget will be intrigued by a new love interest played by Grey's Anatomy hunk Patrick Dempsey. As despicable and insecure as he could be, Daniel was a character I hated to love and loved to hate. Though it's clear by now that he was never any real competition for Bridget's heart, this movie will be fundamentally different for Daniel's absence. Was that always a part of the plan? Well, why Grant isn't in Bridget Jones's Baby is complicated.

During the press tour for his new biopic Florence Foster Jenkins, Grant tells Bustle why he chose not to sign on for a third Bridget Jones film. He was approached to be involved, the actor says, but ultimately, his involvement hinged on the quality of the script, which involves an unplanned pregnancy with two possible dads, and his character's arc. Explains Grant,

When they came to me a few years ago, they had a good central premise, but I didn’t think the script completely worked. So I worked with them on it for some time, almost a year, I think, and I could never make the second half of the film work, as far as I was concerned, especially for my character. So in the end we sort of ran out of time, and I said, 'I think you should make it with someone else.'

There's a lot to unpack here. First of all, the actor seems to feel a keen ownership of the role and a stake in Daniel's continued development. He claims he could've been in the new film, but he turned the opportunity down because he didn't think the part was up to snuff. However, he apparently didn't walk away immediately, claiming to have collaborated with the screenwriters (author of the novels Helen Fielding, Bruno writer Dan Mazer, and actor and filmmaker Emma Thompson are all credited) for nearly a year to sketch and flesh out Daniel's trajectory in this movie. Yet according to Grant, they weren't able to do so to his satisfaction.

Grant's comments on the matter also imply, at least in my eyes, that Dempsey's character Jack Qwant is essentially a replacement for Daniel Cleaver. As a Bridget fan, I predict that I'll have a difficult time watching this movie without imagining what it would look like if the initial script had made it to screen. Then again, Bridget Jones: The Edge Of Reason, the first sequel to the original Oscar nominated film, didn't have the soul of its predecessor — partially, I think, because it returned to the Mark-versus-Daniel well. If Daniel couldn't fit into Bridget's onscreen story anymore (he does appear in the most recent novel, Mad About The Boy , which is hugely different plot-wise), then maybe it's best Grant said his goodbyes.

And according to Grant, the movie is just fine even with the removal of Daniel and the addition of a new rival for Bridget's affections. "I’ve seen [Bridget Jones's Baby]," Grant says. "There’s some very funny stuff in it."

An endorsement from Daniel Cleaver himself? I'm all in.