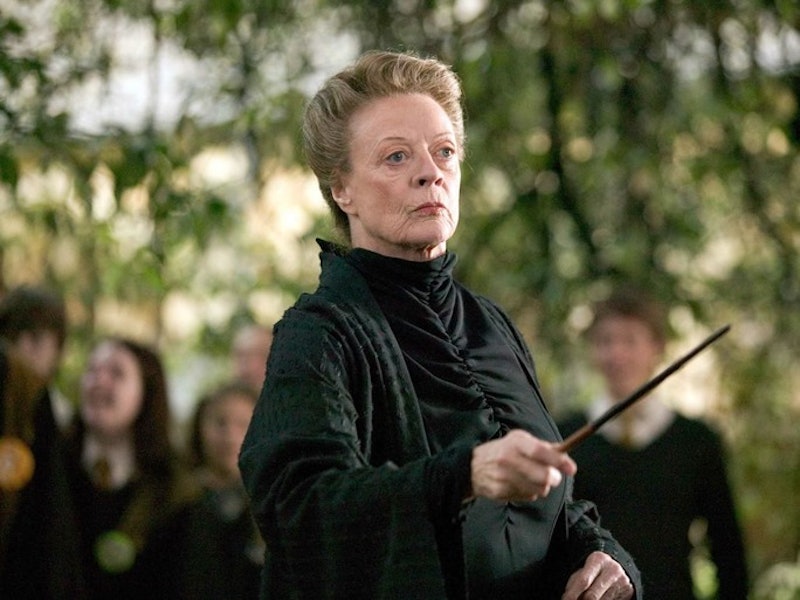 If you’re any kind of Potterhead worth your weight in Bertie Bott's Every Flavour Beans, then you already know that Professor McGonagall is a total badass. But what you might not expect is that Minerva McGonagall is even more of a hero to Hogwarts than you think — if you can believe it. According to one of the three Pottermore Presents e-books released by JK Rowling on September 6, there is plenty left to learn about Professor McGonagall — including the invaluable role she played in the second wizarding war. The e-book, Short Stories From Hogwarts Of Heroism, Hardship, and Dangerous Hobbies profiles two of Hogwarts’s more notorious (and understated) professors: Remus Lupin and Minerva McGonagall; as well as two-hit-wonder divination professor Sybill Trelawney and the briefly mentioned care-of-magical-creatures instructor Silvanus Kettleburn (he held the position before Hagrid, and don’t worry — I didn’t quite remember him either.) But let’s be honest: the highlight of this book is definitely our gal McGonagall.

From her Hermione-like academic history to her surprising romantic past, here are 7 times Professor McGonagall was a badass that you didn’t know about — until now, that is. You always suspected there had to be more to McGonagall than meets the eye.

1. One of her parents was Muggle-born — just like those of our good friend Harry Potter.

Professor McGonagall was the first child born to non-magic Scottish Presbyterian minister Robert McGonagall, and Hogwarts-educated witch Isobel Ross — and Minerva had already been born before Isobel had the courage to tell Robert she was a witch. Scandalous.

2. Minerva McGonagall displayed signs of having magical powers from the moments she was born.

According to Professor McGonagall’s mother Isobel, as a baby Minerva began to show signs of magic just hours after being born — summoning toys into her crib, playing music from another room, and ordering the family cat around. (Perhaps a clue into her Animagus form.)

3. Both academics and Quidditch run in her family.

As Transfiguration professor and die-hard Gryffindor Quidditch fan, it’s no surprise that McGonagall’s mother both graduated at the top of her class (in Charms), and was also Captain of the school Quidditch team during her time at Hogwarts. A Quidditch player herself, McGonagall also earned top grades in O.W.L.s and N.E.W.T.s, was both Prefect and Head Girl, and was once a winner of the Transfiguration Today Most Promising Newcomer award. Whew.

4. She was offered her first job at the Ministry of Magic at only 18-years-old.

Minerva moved to London to work for the Department of Magical Law Enforcement immediately after graduating from Hogwarts; and just two years later she was back at her alma mater, having taken a teaching position in the Transfiguration department.

5. She turned down her fair share of marriage proposals.

The first was from a Muggle named Dougal McGregor, whom Minerva truly loved — she turned him down in order to live freely in the Wizarding community, and to pursue her career at the Ministry of Magic. The second — and several subsequent proposals — came from Elphinstone Urquart, Minerva’s former boss at the Ministry. (She finally accepted one of Elphinstone’s relentless proposals after Voldemort’s first defeat, but sadly Elphinstone died three short years later.)

6. As a feminist, she kept her own name after marriage — her Muggle father’s name.

Although some pure-blooded traditionalists raised their eyebrows at this decision, she remains forever known to us as Professor “McGonagall”.

7. She is also named after the Roman goddess of warriors and wisdom, as well as William McGonagall, whom JK Rowling notes is “celebrated as the worst poet in British history.”

Often equated with the Greek goddess Athena, Roman goddess Minerva was born from the head of Jupiter as a fully-formed woman, already outfitted with weapons and armor (aka: a badass). In a fitting twist, her sacred animal was an owl. A perfect namesake, amirite? (I dunno about the British poet though…)