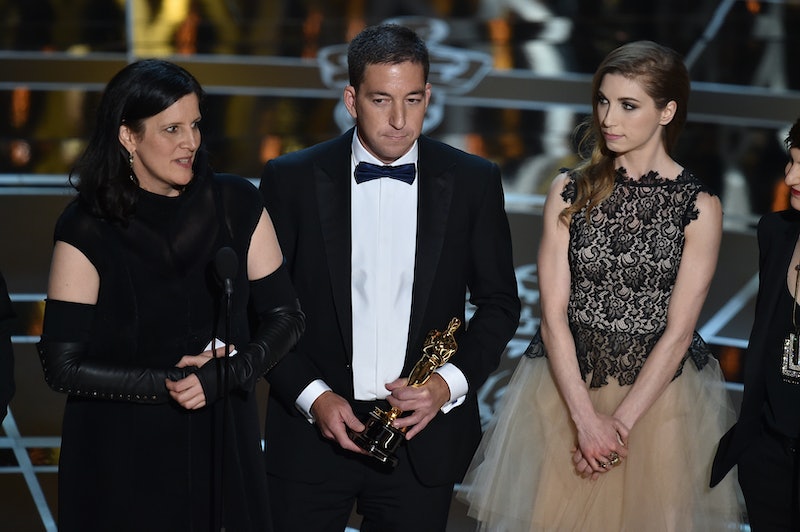 Even if you recognize Joseph Gordon Levitt's face in the trailers for Oliver Stone's Snowden, out Sept. 15, his voice might throw you for a loop. The actor sets his pitch lower and adds some grit to play Edward Snowden, the former NSA employee turned fugitive. The biopic also stars Golden Globe nominee Shailene Woodley as Snowden's real-life girlfriend Lindsay Mills. In the years since Snowden leaked a cache of classified NSA documents to three journalists in 2013 and subsequently fled the country, Mills' link to Snowden was revealed and she's become something of a celebrity by association. She even appeared onstage at the 2015 Oscars as director Laura Poitras and Glenn Greenwald (both journalists who were on the receiving side of the leak) collected the Best Documentary Feature Academy Award for the Snowden-centric Citizenfour.

Mills' connection to Snowden was revealed in June of 2013 when her father Jonathan Mills confirmed to the Associated Press (via Yahoo News) that they had been dating for four or five years. He had met his daughter's boyfriend and described him as "very nice" though also "shy" and "reserved." Previous to that confirmation, media outlets including Buzzfeed had speculated that her web presence, including a personal Facebook and a blog, suggested that acrobat and dancer Lindsay Mills was dating Snowden. Mills referred to her boyfriend as "E" on the blog L's Journey, and had shared photos of him he wasn't facing the camera or his face was obscured.

In 2012, Mills had updated her blog with the news that she'd moved to Hawaii with "E," according to Buzzfeed. The posts detailing their lives there are now gone; so is an entry from June 2013 that consists of Mills coming to terms with surprising news. The L's Journey blog was deleted. Though the US government's espionage and theft charges against Snowden required that he seek asylum internationally at that time, his departure from the country apparently did not mark the end of their relationship. In the same AP interview, Jonathan Mills stated that he believed Mills would stay with Snowden.

Citizenfour reveals that Mills and Snowden were still very much together after his choices upended their world. She moved to Moscow to be with him. Mills reactivated her blog in March 2015 and still posts regularly, though entries prior to that month have not been restored. Her most recent post with Snowden is dated Aug. 25. It's a selfie of Mills and Snowden on some unidentified body of water, looking off into the distance. Mills wrote:

with the end of summer drawing near. the sun setting minutes earlier each day. and cooler currents whipping in. a vacay was in order. successfully hijacked this guy (sorry twitterverse for causing such a scare [wink emoji] grabbed essential holiday tools: bundles of yarn, bikini, an adventurous attitude. and relaxed for the last days of the season before the real world takes over.

Mills actually met the actors portraying herself and her notorious boyfriend when she visited Snowden's Washington, DC set. In an interview with Fox 5 DC, Woodley remembered meeting Mills during the shoot and then going to dinner with her and Gordon-Levitt. At that point, much of the movie had already been filmed and it was too late to alter her performance. "I wish I had met her earlier," Woodley said. "Because there's certain physicalities that she possesses that I would have incorporated into the work."

Despite her dreamy selfies and poetic blog posts, Mills remains something of a mystery. Snowden and Woodley's portrayal will offer many moviegoers their first insight into the loyal partner of Snowden.

More like this
Marcus Rashford Took Inspo From Kravis For His Adorable Proposal To Girlfriend Lucia Loi
By Frances Stewart
Fans Don't Think Kim Kardashian Actually Ate Anything In Her Beyond Meat Ad
By Jake Viswanath
Taylor Swift, Kerry Washington & More Speak Out On Uvalde Mass Shooting
By Jake Viswanath
Kylie Jenner Roasts Kendall For Her Cucumber Cutting Skills On TikTok
By Jake Viswanath
Get Even More From Bustle — Sign Up For The Newsletter