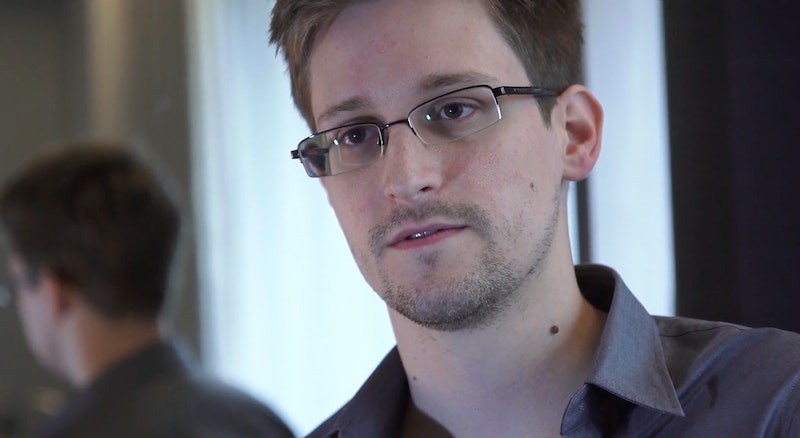 The Best Documentary Feature category might not be the most prestigious or highly anticipated category at the Oscars, but the time and effort that went into making those films is equal to that of any of the big budget offerings in the Best Picture categories. When we're not busy trying to decide whether Benedict Cumberbatch or Eddie Redmayne deserves an Oscar more — or complaining about how whitewashed the 2015 Oscars are — it's time to shine our focus on the amazing documentaries in the Best Feature category. Specifically, it's time to watch the winner, CitzenFour, online — if you know where to find it. Luckily, that's exactly what I'm here for.

The competition was pretty stiff between CitizenFour, The Salt of the Earth, Last Days in Vietnam, Virunga, and Finding Vivian Maier, but CitzenFour managed to come out on top. CitizenFour is a documentary by Laura Potras, and the synopsis on the official HBO website describes the film as follows:

CITIZENFOUR is a real-life international thriller that unfolds by the minute. With unprecedented access, this gripping behind-the-scenes chronicle follows Poitras and journalist Glenn Greenwald’s remarkable encounters with Edward Snowden in a Hong Kong hotel room as he hands over classified documents that provide evidence of mass indiscriminate and illegal invasions of privacy by the National Security Agency (NSA)... It places viewers in the hotel room with Poitras, Greenwald and Snowden as they attempt to manage the media storm raging outside, forced to make quick decisions that will affect their lives and all around them. The documentary not only shows the dangers of governmental surveillance, but makes audiences feel them. After seeing the film, viewers will never think the same way about their phone, e-mail, credit cards, web browser or digital footprint again.

So, let's celebrate CitizenFour's victory by watching the feature documentary the Academy deemed most worthy of a golden statue. And why wouldn't they? CitizenFour promises to change your life, to change your worldview, and, at the very least, to force you to think — and what more can you really ask for in a documentary? The saga of Edward Snowden is one that fascinated the American public from the moment that it hit the papers to the present day, and CitizenFour presents a side of the story that many people might not have ever known.

Where can you watch it? In addition to being available in theaters, HBO plans to air the documentary on Monday at 9 p.m. For those without a television, the film is also available for download on iTunes. So, basically, you have no real excuse not to add this movie to your viewing list as soon as possible.

Check out the trailer for the film below.