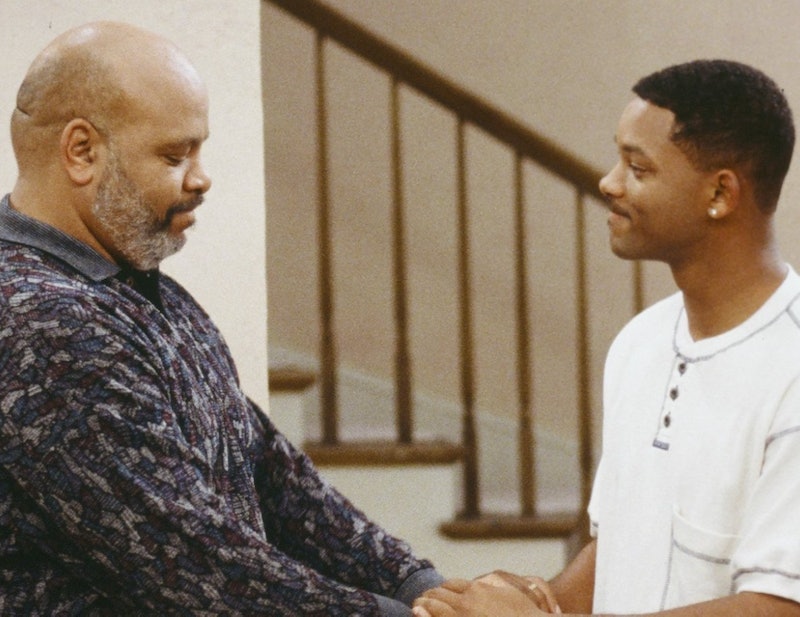 To this day, there remains only a small amount of shows which are capable of striking that truly fine balance between side-aching hilarity and truly heartfelt moments of drama. And, though it obviously feels great to be able to slouch back and get your laugh on after a long, difficult day, it can feel just as good to have a big, old cry too. Obviously, there were emotional episodes of The Fresh Prince Of Bel Air that could totally reduce anyone to tears. Some of the best Fresh Prince moments that still make you cry are the ones that managed to tap into relatable, everyday conflicts of living — heartbreak, insecurity, family problems, societal issues, and drug abuse.

It wasn't just that the show was keen at developing funny characters with a complex, emotional core, but also that it was a sitcom that wasn't afraid to get real about life, relationships, or society. Fresh Prince could have you sobbing into your couch cushions because you truly rooted for the well-being and happiness of every character. As a viewer, you almost felt part of the Banks family, and experienced their lives deeply, whether for funnies, for some much needed real-talk, or for some therapeutic emotions.

These Fresh Prince moments all managed to get mighty real, and turn you into a blubbering mess as a result.

In the Season 4 episode "Papa's Got A Brand New Excuse," Will's dad returns after 14 years of being absent from his son's life. He has a great time with his dad despite Phil's concerns that he'll only leave and disappoint him again — which Will's father eventually does. The Fresh Prince reacts by pretending that he's "fine" about it before completely breaking down in front of Phil and asking, "How come he don't want me, man?" It's a heartbreaking performance from Smith and it's still completely devastating to watch. I'm crying just writing about it here.

In Season 1's "Mistaken Identity," Carlton and Will get arrested after being pulled over for driving a beautiful car belonging to one of Phil's white colleagues. The episode is phenomenal in dealing with ideas of systemic racism — a factor which propels Phil and Viv to confront the police at the station with a powerful, and ultimately emotional, set of speeches.

In a scene that is so empowering on so many levels, Hilary gives her little sister Ashley a sex talk that I seriously wish I could have gotten at her age. Rather than delivering judgement or condescension, Hilary instead reminds her sister that she's smart, strong, and independent enough to decide when the right time to lose her virginity will be on her own. And also — pass the tissues over now please — that she'll love and be there for her whatever her decision is.

4. Phil Gets Dissed On Hilary's Show

This might not seem like much of an emotional moment, because a lot of it is played for laughs. But, trust me, this scene is tender for anyone who has ever hurt their parents unintentionally. After Hilary invites a guest onto her show with a known bad history with her father, the guest then goes on to throw jibes at Phil live on air — whilst her whole family is watching. Phil is beyond hurt and humiliated by the show, telling Hilary, "I don't know if there's a knife that could cut as deeply." Welp.

5. Will Gets Shot (And Carlton Buys A Gun)

After Will takes a bullet for Carlton, Carlton goes to visit his cousin in hospital only to shock him with a new belonging: a gun. The emotional conversation that goes on between the two, in which Carlton suggests that a gun will protect him while Will suggests that it could do otherwise, is full of surprisingly tense, visceral displays of emotions. And, my heart, you guys. It still stings.

6. Phil & Will Have A Relationship-Defining Heart-To-Heart

In a definitive moment at the end of the show's pilot, what starts as an argument between Phil and Will actually ends with them both discovering some newfound respect for each other. While Will discovers that his uncle isn't as out of touch as he thought, Phil discovers that Will may be more smart and capable than he gave him credit for. It's an early sign of the bond that would soon make me cry every other episode.

7. Vivian Slays At A Dance Class

When she starts to feel old, Vivian decides to enroll herself at a dance class. She has a lot to prove to herself, and apparently her family — not to mention the young, sneering whippersnappers in the class. So, when she finally nails the dance routine (and, it should be noted, dances way better than classmates half her age), it's beyond amazing. She finger snaps her way out of the room and the expression on her face when she finally achieves her goal is priceless. I'm crying victory tears all the way out of that one.

We all laughed when Carlton was throwing some amazing shapes at the prom after accidentally taking some of the speed that Will had stashed in his locker. But the episode gets super serious, super quickly after he collapses and gets hospitalized as a result of taking the found drugs. It's Will's heartbreaking confession to Phil and Vivian, however, that truly brings the tears, seeing him breaking down over the fact that someone he seriously loves could have died because of him.

9. Will Gives Ashley Advice About What Men Want

After Ashley decides to spruce herself in order to gain some male attention in school, Will and Carlton witness her getting treated disrespectfully by a guy as a result. Recognizing that he often objectifies and mistreats women in the same way, he consoles his cousin by reminding her that she's "quality" and deserves to attract a man who values her for the spectacular woman that she truly is — not just for her good looks. It's beyond touching.

10. Will Gets Schooled By The Ghosts Of Drunk Driving

In Season 4's "You've Got to Be a Football Hero," Will gets horribly drunk at a party, makes a grand speech, and then attempts to drive home under the influence. He wakes up in a cemetery (where else?), where several ghosts educate him on the irresponsibility of drunk driving and that it can often end in death. And not even just the driver's death.

11. Carlton Defends Himself Against A Frat

After Will gets accepted into an all-black fraternity but his cousin doesn't, Carlton shares some home truths with the head of the frat over why his rejection (which was over his Bel-Air privilege) is offensive. "Being black isn't what I'm trying to be, it's what I am. I'm running the same race and jumping the same hurdles you are, so why are you tripping me up?" he tells the guy, before suggesting that African-Americans should be sticking together, not creating more disparity.

12. Uncle Phil Has A Heart Attack (And Carlton Freaks Out)

When Phil has a heart attack and gets hospitalized, Carlton refuses to visit him at the hospital. While Carlton is busy trying to distract himself from his worries over his father, Will confronts him over his absence at his father's side. Though Carlton's fear is understandable, as he says, "Look, I don't want to see my father with tubes up his nose," it's Will's reminder that Carlton's lucky to have a father and is being selfish by avoiding him that really digs the tears out.

Listen, there isn't one damn moment in the whole of the final episode that frankly doesn't make me cry. But watching Will and Carlton enjoy one final dance? And salute each other with that final hug? Oh, my heart. When Will turns out the lights in the empty Banks household right before the final credits sequence, I'm officially a bawling mess. Every. Damn. Time.

I don't know if I'm just getting old and soft, but I can barely even speak about most of these moments any more without tearing up and having to blame it on my allergies. Fresh Prince still has the power to be ridiculously emotional, so, next time you feel like you need a good, cathartic cry, then I highly recommend you dive back into the show.