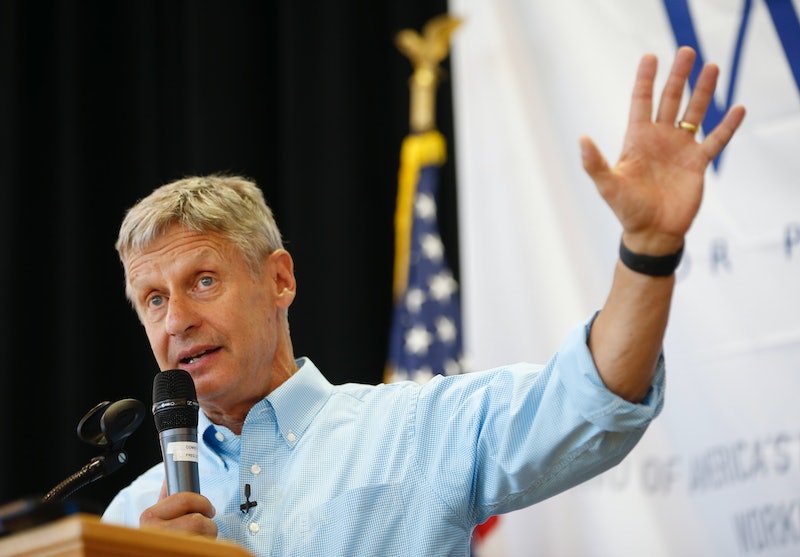 In an election year where neither major party candidate is especially popular (to put it mildly) libertarian candidate Gary Johnson is pushing for the main debate stage. The former New Mexico governor is currently polling at around eight percent nationally, according to the RealClearPolitics average. In an attempt to meet the 15 percent polling threshold necessary to earn a spot at the podium, former New Mexico governor Johnson has begun an ambitious television ad campaign, in addition to the $2 million he already spent on radio ads, to garner the necessary support.

What sorts of opinions would come from that third podium on the debate stage? In many ways, Johnson seems like a good fit for voters who identify as liberal: he is legislatively pro-choice, opposes what he calls the "social conservative dogma of the Republican Party," and supports the legalization of marijuana use and sports gambling. Supporters describe him as honest, practical and experienced. But Johnson is not the savior to disgruntled Bernie Sanders supporters that he proclaims himself to be.

But before you assume Johnson is the panacea to your Democratic-Republican woes, consider these views he holds.

This ought to be a particular thorn in the side of former Sanders supporters: Johnson hates the Affordable Care Act. Johnson even called it "a torpedo in a sinking ship" in 2012. He also supports enormous cuts to Medicare and Medicaid.

Wants To Abolish The Department Of Education

The elimination of the Department of Education is a centerpiece of Johnson's campaign. Johnson and Weld support transferring control of education to the state and local levels, and they support school choice.

While far from perfect, I believe the Department of Education has been a key component in ensuring that certain standards are met in all schools across the country. Without it, teachings of abstinence-only sex education, creationism, and inaccurate slavery history would be rampant, particularly in rural areas and the south.

Johnson was opposed to mandatory vaccines; he appeared to reverse his mandatory vaccine opinion this past August, only to restate his opposition a few days later. At a rally in New Hampshire that month, Johnson stated:

I support a person's right to choose, so when it comes to vaccinations we should be able to make the decision whether we want to vaccinate our kids or not. I choose to vaccinate my kid and you never say never. Look, in the case of a zombie apocalypse taking over the United States, and there is a vaccine for that, as president of the United States, you might find me mandating that vaccine.

Johnson supports GMO labeling on food in spite of the fact that extensive scientific research has not found it to be uniquely dangerous. Fearmongering about GMOs (also common amongst anti-vaxxers) has been criticized as being anti-science by none other than Neil DeGrasse Tyson.

In the end, could Johnson Surpass 15 percent and make it to the debate? Well, it wouldn't be the highest mountain he's ever climbed.