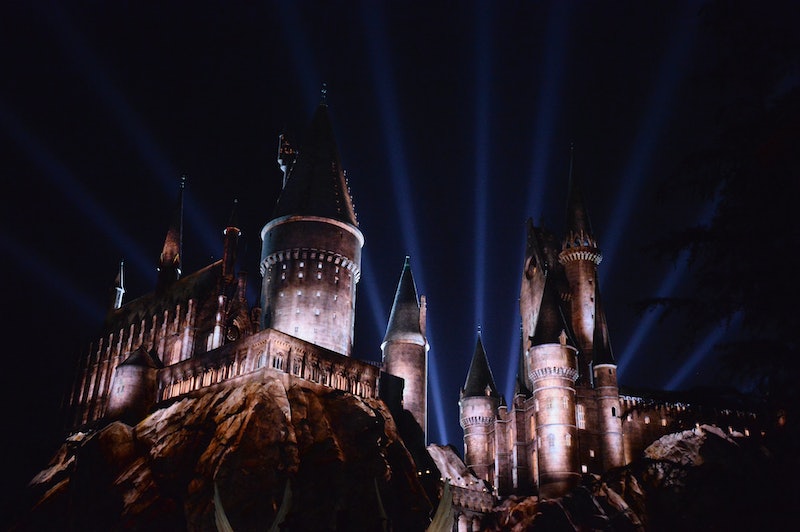 Ask any Harry Potter fan: there is some serious competition for the title of the most haunted dwelling in Britain. Or at least there was some serious competition until recently, when JK Rowing set the record straight in her new e-book Hogwarts: An Incomplete and Unreliable Guide — one of three e-books released on September 6 under the heading Pottermore Presents , that offer Potterheads all kinds of juicy fun facts about everything-Hogwarts — which decidedly states: “Hogwarts is the most heavily haunted dwelling place in Britain.” So, there you have it folks. Mystery solved.

Except for one small, maybe noteworthy, detail… Rowling’s declaration might have some Potter readers confused. After all, it was all the way back in Harry Potter and the Prisoner of Azkaban, the third novel of the seven-novel (and now, one play) series, when Hermione informed Harry and Ron that the Shrieking Shack is actually the most haunted locale in all of Britain, saying:

“The Shrieking Shack is the most haunted dwelling in Britain; a slightly creepy building even in daylight, with boarded up windows and an overgrown garden. It is located on a hill above Hogsmeade. Rumour has it that a rough crowd live in the Shack, and even the Hogwarts ghosts avoid it.”

So Potterheads, I ask you: what gives? Because if you ask me, a scuzzy little boarded-up shack sitting atop a hill above Hogsmeade, that can only be accessed via an underground tunnel leading from a homicidal willow tree, and is rumored to be well-populated by violent and vocal spirits seems like a pretty good pick for “most haunted dwelling ever.” Am I right?

But of course, as you probably know, Hermione’s data was just a tad misinformed (through no fault of her own, mind you.) As readers soon learned, the Shrieking Shack actually earned its haunted reputation during Remus Lupin’s time as a student at Hogwarts, when he used the shack as a hide-out during the full moon, in order to safely transform into a werewolf without harming his fellow students and friends. The shrieking and the subsequent rumors about the ghostly status of the dwelling can both be attributed to Lupin. So alright, eerie as the Shrieking Shack may be, haunted it is not — especially if you include the fact that even the Hogwarts ghosts avoid it, it seems the little abode is apparition-free.

And hey, speaking of those Hogwarts ghosts, it turns out Hogwarts became the most haunted dwelling in Britain due to how hospitable an environment it makes for all beings incorporeal. (Ghosts need love too, ya’ll.) From attending Nearly Headless Nick’s death day party, to attempting to assuage (or at least tolerate) Moaning Myrtle’s misery, Harry Potter and his pals definitely went out of their way for their ghostly friends. The school didn’t even bother retiring Professor Binns, even after he died, but rather allowed him to continue teaching his History of Magic classes from beyond his body. Rumor even has it that student and faculty alike have been so conscious of Binns’s feelings that he still might not even know he’s dead. So, I guess the statement holds: Hogwarts is the most haunted dwelling in Britain.