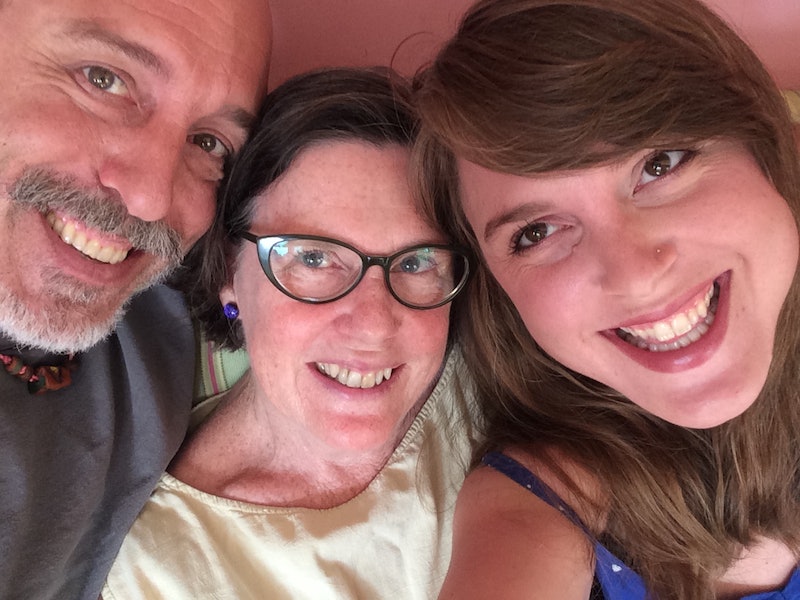 You know all of those think pieces about millennials who live at home with their parents? Yeah, they’re talking about me. I’m 29 and I’ve lived with my parents three times since graduating college: Once in order to save money for a few months before moving to Argentina, and the second two times because my boyfriend and I, who are nomadic, felt like spending summer in my home state. According to the Pew Research Center, this move back was actually normal: In 2014, for the first time in 130 years, people between the ages of 18 and 34 were "slightly" more likely to be living with their parents than they were to be living with a S.O. or spouse.

But whether you’ve moved home because you had to or, like me, you just dig your hometown and have chill parents, there will inevitably be conflict if you move back home. For example, some parents will always view their kids as children, no matter how old they are, and as an adult child living at home, you’ll probably chafe at the under-the-microscope feeling as your parents become intimately involved with your daily life again.

“Once upon a time these people taught you to walk, tie your laces, and do long division, and they set all of the rules without a question asked,” writer and photographer Sian Joan Kavanagh, who currently lives with her parents in Ho Chi Minh City, tells Bustle. “Now you’re back under their roof but can legally drink, have your own career, and social agenda that maybe doesn’t line up with theirs. It puts the family in a weird half-adult partial-control limbo, and the only way you can deal with it is by offering mutual respect.”

But don’t despair! There are steps you can take to minimize the friction of living at home again. Here are nine tips from my own experience and that of my friends who have moved back home as adults.

1. Don’t Even Consider It Unless You Have A Good Relationship Already

Sarah K., 32, moved back home with her parents after college and lasted “approximately four days.” Unbeknownst to her, both of her parents were suffering from physical and mental health issues that made living them completely unbearable.

“Had I known that my ‘rent’ was going to come in the form of unlicensed forced therapy sessions with me as the therapist and endless errand-running, I would have just skipped that option and run straight for a friend's couch, which is where I ended up anyhow!” Sarah tells Bustle.

So do an honest assessment of your relationship with your parents. Do you know what their day-to-day looks like? Do you know things like what they eat or what they might expect of you if you’re living with them? Do you generally get along? If it seems like the answers might be “no,” learn from Sarah’s mistake and couchsurf with friends for a while instead.

2. Respect Personal Space — And Demand Respect For Yours

Your parents have private spaces within their house and you, presumably also have yours. As someone who not only currently lives with her parents but also grew up in a big family, I can’t overemphasize the importance of respecting those private spaces. Make it clear to your parents that your room is your room and their room is their room and while you do appreciate the gesture of your mom wanting to wash your clothes for you, you’d really prefer to do it yourself. This also creates a physical place that you can retreat to when you need some time off from family — which, trust me, you will definitely need.

3. Have A Conversation About Boundaries

Spacial boundaries are just one category of boundaries that you’re going to need to set with your parents. Mariella, 27, has been living with her parents for the past year as she completes grad school. One big thing that she had to get her parents in the habit of was not asking where she was going and who she was going with every time she left the house. That’s obviously a habit that parents develop when you’re a teenager, which totally makes sense, but can strain parent/adult child relationships.

Sex is also a big one that will definitely come up. As awkward as it might be to talk to your parents about your sex life — and it’s definitely awkward to talk to them about theirs — making expectations around sex clear from the get-go is important. So, for example, if you’re single are they OK with you bringing home a date? Are there certain times they’d prefer you were out of the house so they can do their thing? There are a lot of questions that need answering around this issue if you’re going to have a harmonious house.

Seriously — treat each other like roommates because that’s basically what you are. This stage of your life is totally different from the last one where you lived with your parents and a good way to work that out conceptually is by agreeing to treat each other as roommates instead of parents and children. It puts you on a more equal footing than you would be otherwise and also creates space for all of you to grow, which is always awesome.

Sarah R., 32, was 28 when she and her husband moved back into her parent’s house for six months following a stint in the Peace Corps. Her number one piece of advice can be summed up neatly: a little goes a long way.

I’ve definitely found this to be the case as well. As often a possible, I volunteer to do the grocery shopping or I strip all of the guest beds and wash the bedding or I help my mom with dinner. The one area I could definitely improve on is cleaning the bathroom — I’m working on it, mom, I promise.

Sarah R. also recommends eating separate meals sometimes, even if you’re all eating at home. Family dinners are great (especially when it means you don’t have to cook) but eating on your own or with your partner can help you feel independent when a lot of your life feels like it did when you were 15 and relied on your parents for everything still.

“Sometimes we did family dinners, but we also did a lot of separate meals, even though we were all in the same house,” Sarah says. “It actually helped us all feel like our time/lifestyle was still ours.”

7. Verbally Acknowledge That You Have Different Lifestyles — And That’s OK

One issue that Sian has encountered is that even though her parents are great and generally pretty chill, they’re at a very different point in life than she is. While her parents are health-conscious people who “willingly wake up at 5 a.m. to be shouted at by a muscular French man and enjoy it,” Sian’s life as a 23-year-old tends to have more late night hangs with friends than early morning fitness routines.

“It’s not easy to find that balance between our varied social lives, and actually have time to enjoy each other’s company,” Sian says. Luckily, her mom also acknowledges the difference and told her once that she knew they were “applying [their] 49-year-old lifestyle on a 23-year-old woman.” A simple acknowledgement of the fact that you’re at different stages in your lives — And that’s OK! You’re not judging them and they don’t need to judge you! — can make a huge difference in your daily interactions with your parents.

8. Give A Friendly Reminder That You’re An Adult, When Needed

If your parents are slipping back into acting like, well, parents, it’s OK to remind them that you’re not a child anymore. Try not to do it in the moment that they piss you off (hard, I know) but if you’re feeling like you need them to treat you more like an adult, it’s totally within your rights to tell them that. And if they can’t do it? It might be time to seek out other arrangements.

Living with your parents with your S.O. can be especially trying. My boyfriend and I took one weekend away and immediately felt better around each other than we had for at least a month. But even if you’re single, taking time away from the ‘rents will definitely do you good. Think of those friends from college that you’ve been meaning to visit forever or that town you’ve always wanted to visit and go do it. Your parents will thank you.