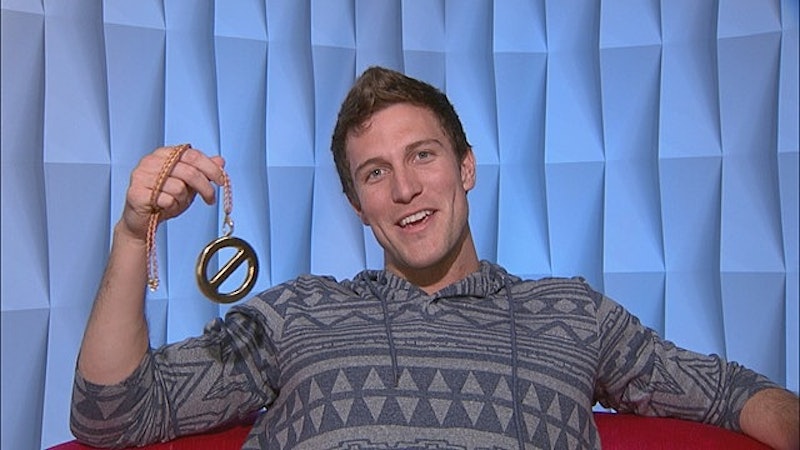 Man, did Natalie and James need a Power of Veto win on Big Brother 18 this week. They got pretty close (well, Natalie did — James needs more creativity), but ultimately, they both lost POV privileges to none other than boy wonder Corey. Now, James and Natalie can do nothing but wait for one of them to be evicted — whom will the rest of the house choose to cast out? Corey is in control on Big Brother 18.

CBS’ cross-promotion of their shows never ceases to amaze me. The Power of Veto competition was MacGyver-themed, because CBS is bringing back the wonderful 1980s show about a secret agent that’s really good at improvisation. The houseguests had to complete a bunch of tasks in a certain number of minutes, and honestly, the only people who even remotely came close were Natalie and Corey. I worry for the youth of America if James doesn’t realize that water can travel down objects. Anyway, I really thought Natalie had it in the bag here, but Corey ultimately beat her MacGyver time by nearly three minutes. Typical Corey, right? Has to outdo everyone. This time, it was really important for Corey to scoop up POV — if Natalie had won, she could have taken herself or James (it would have been herself) off of the chopping block, disrupting Nicorey’s very important alliance.

Obviously, Corey opted not to use the Power of Veto, and now Natalie and James are sitting ducks for who will be evicted next time. Natalie campaigned a little for herself — you could tell just how hard she was trying not to lose it, because she really wants to stay in the game — but said that it would be better to keep James in the game. This is why you don’t do showmances, people! They mess with your head and the $500,000 grand prize. We’ll have to wait and see who gets evicted, but Corey knows that he just pulled a major coup on Big Brother.