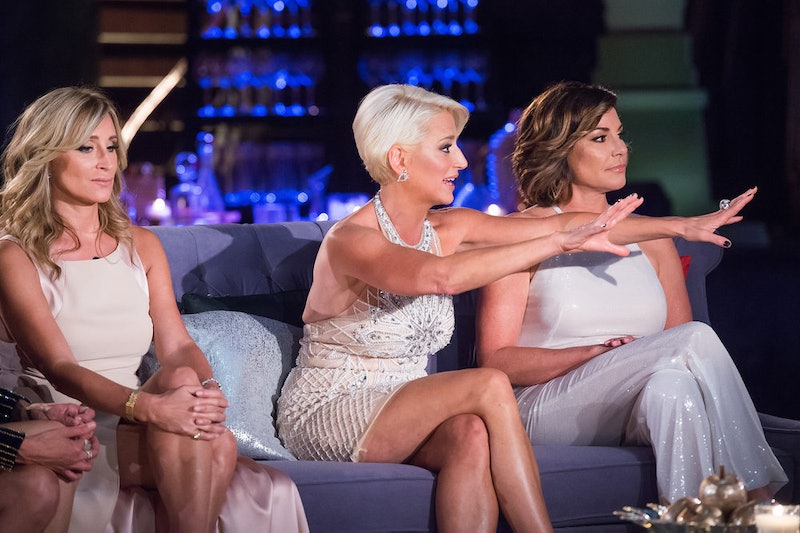 A lot of this season of Real Housewives Of New York may have been about the drama between Luann, her fiancé, and the other housewives he allegedly dated, but there was definitely an orchestrator to most of the other dramas — Dorinda Medley. Not only was Dorinda the one whispering in Jules’ ear to confront Bethenny or the one telling Luann what Sonja said about Tom, but she denied it all when onscreen! Well, the housewives confronted Dorinda during the Real Housewives Of New York reunion, and Dorinda, of course, had plenty to say.

Dorinda (or as they call her, Dorinda “Meddler”) frames her constant meddling as wanting to help solve people’s problems, and the other women called BS on that. Dorinda actually pushed the cast to start a few of the fights on this season (including Luann and Ramona on the yacht and Bethenny and Jules at their dinner), and I just thinks she likes feeling included and probably likes the attention. She also probably enjoys the fact that the drama isn’t about her — she can sit back and watch. Viewing all the footage back at once at the reunion, it was hard for Dorinda to deny her role in the conflicts this season. She aimed to change her ways, throwing herself as a half martyr who would no longer help people. OK, Dorinda.

Will and can Dorinda change? Probably, but since she stirs up drama and then walks away from the mess, she makes for great TV. I like Dorinda, too! She makes things nice and is the most hospitable of the ladies, especially when in the Berkshires, but she loves to stir the you-know-what. How about next season we see a lighter, quieter Dorinda and see which version we prefer?

More like this
‘RHOBH’ Newcomer Sheree Zampino Is Still Close To Ex-Husband Will Smith
By Brad Witter
The 'Selling Sunset' Cast Isn't Buying Christine's Excuse For Ditching The Reunion
By Brad Witter
JoJo Fletcher & Jordan Rodgers Got Married In A “Playful & Fun” Wedding
By Grace Wehniainen
The Richest 'Bling Empire' Cast Member Is...
By Hugh McIntyre
Get Even More From Bustle — Sign Up For The Newsletter