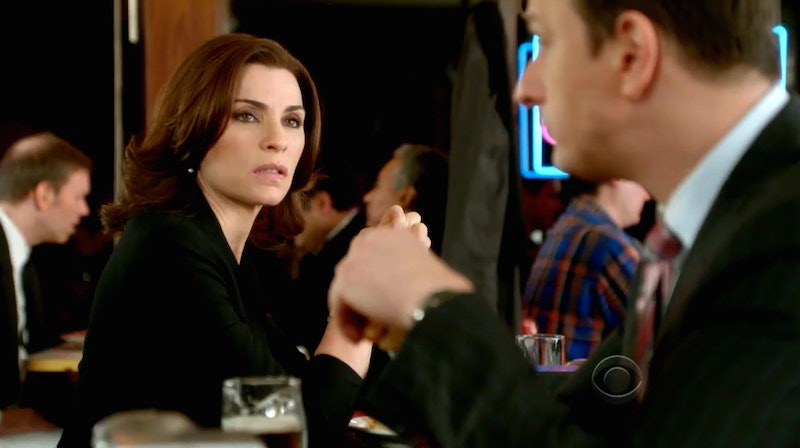 Fresh off the news that it’s been renewed for another season (yes!), The Good Wife returned last night with “A Few Words,” the second episode in its special three-episode event. Though this week’s installment didn’t do as much to advance the season’s major plotlines as last week’s, it did give us an eye-opening look back at the beginning of Alicia Florrick’s bond with Will Gardner. And during the episode’s final act, Alicia and Will have a chance meeting in a New York coffee shop that could possibly alter the course of their relationship... forever. Sadly, there weren’t any romantic fireworks, but the two former lovers did finally come to some sort of understanding.

Just as the election fraud investigation into Peter Florrick is starting to heat up, the lawyers of Florrick/Agos and Lockhart/Gardner head to New York City for the American Bar Association’s Annual Meeting, where Alicia has been asked to deliver the keynote address. There’s only one problem — Alicia’s speech sucks. Well, okay, it doesn’t suck exactly, but Cary Agos calls the final draft of Alicia’s speech “dry.” Ouch. With only one day left until the address, Alicia scraps what she’s got and goes back to the drawing board. As she stares at the blinking cursor on the blank word processor screen, her mind begins to wander. She recalls the moment she first reconnected with Will.

Shortly after Peter's sex and corruption scandal has gone public, Alicia thinks she has just landed a new position as a first-year associate at a law firm. She's triumphantly leaving the job interview when all of a sudden, someone reaches out and stops the elevator doors from closing. It’s Will! And Alicia’s heart skips a beat. (Side note: this kind of thing is always happening on television and in movies, but let the record show that elevators are not sexy. They are stink boxes with flickering fluorescent lights and thoroughly stained carpets. Nobody finds love in an elevator. But I digress.) After the customary small talk, Will remarks that it was nice to see Alicia, and then adds, “And hey, sorry about all that crap with your husband.” Okay, so he’s not a poet, but at least he's a straight shooter! Will gets off at his floor but then changes his mind and turns around and stops the elevator doors from closing again. He locks eyes with Alicia and says, “Call me sometime — Stern, Lockhart & Gardner.” And so it begins.

After Alicia’s associate job turns out to be a total bust, she reaches out to Will. Through a series of flashbacks, we see Will encouraging Alicia to not sell herself short during the interview process. We also see Will fight for Alicia when the partners at Stern, Lockhart & Gardner vote not to hire her “because of her last name.” Will cared about Alicia so much — but a lot has changed. How does he feel about her now? Since Alicia left Lockhart/Gardner, we haven’t really gotten to see the two interact outside of the courtroom. Where does their relationship stand?

With a little help from Cary and Clarke Hayden, Alicia finally finishes her speech. On the evening of the keynote address, everything is going well — until half of the audience gets up and leaves in the middle because of an exciting takeover at a pharmaceutical company. The mass exodus causes Alicia to stumble at first, but eventually she’s able to pull herself together and push through to the end.

After her speech, Alicia heads to the coffee shop across the street to mourn her less-than-perfect performance with a few beers, when who should get seated right next to her but Will. Initially, Will asks the waitress if there’s another table available, but Alicia assures him, “I’m almost finished, I won’t bother you.” When Will comments that Alicia seems to be in a bad mood, she responds that it’s because she just had “300 people” walk out on her. Will counters that it “looked more like 400,” and just like that, the gloves are off.

With fire in her eyes, Alicia blurts out, “Why do you hate me?” Will’s response? “Well, I don’t like you, but hate’s probably too strong.” He reveals that he’s still butt-hurt that Alicia and Cary spent three weeks plotting behind his back to leave the firm. Alicia gives this some thought and then says, “We could never make it work.” Will responds, “You’re linking two things together — I never did.” Alicia doesn’t believe him (and frankly, neither do I), but in his way, Will plainly states that from now on, he will simply be Alicia’s “competitor.” That’s all. This revelation doesn’t seem to satisfy Alicia exactly, but it does clarify the state of their relationship. And ultimately, I think that's what Alicia has been looking for: a little clarity. “Okay, I guess it’s something,” she says after some hesitation and extends her hand to Will. They shake on it: competitors.

While their days of stinky elevator flirting may be behind them, I don’t think that Alicia and Will can possibly remain just competitors forever. Truthfully, I think Peter is a con man, so I’d really rather see Alicia end up with Will (who, admittedly, has his own set of problems). But while Alicia is ready to leave the messiness of her split from Lockhart/Gardner in the past, for the time being, "competitors" seems to be all that Will is capable of.

Next Week: Nelson Dubeck asks Alicia, “You and Mr. Gardner are lovers, isn’t that correct?” and other jaw-dropping surprises!