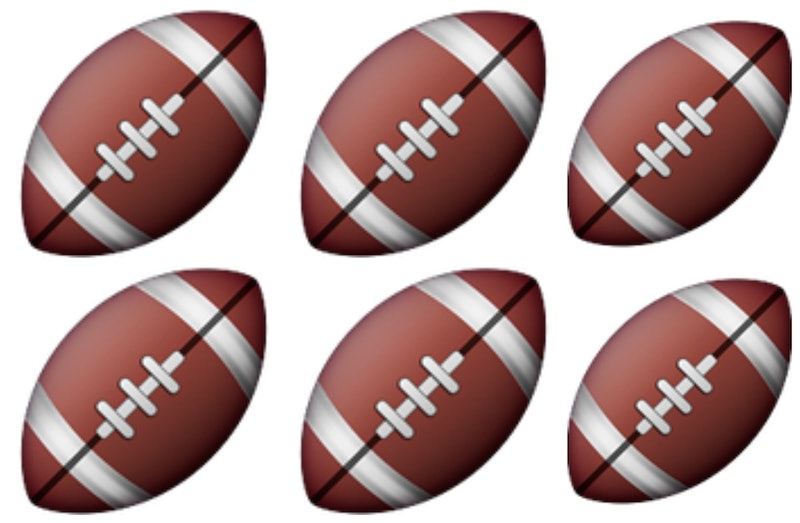 Football season is upon us — which means it's time to take to Twitter and support your team. And now, you can do it with some technological flare: NFL emoji Twitter hashtags have debuted for all 32 teams. Fans are, of course, having an absolute blast with them, because, well... how can you not?

You've probably encountered Twitter's emoji hashtags before — for example, a few handy Star Wars -themed ones were available back in the spring of 2015 — but just in case you're not, here's the deal: Each team's emoji accompanies a specific, team-related Twitter hashtag. The emoji are each added automatically to your tweet whenever you use their corresponding hashtag. So if you're from Denver and you tweet under the hashtag #Broncos, you'll automatically see a Bronco emoji after the tag. If, on the other hand, you're an Eagles fan, you can use the hashtag #FlyEaglesFly for your emoji.

Although there are often many hashtags associated with each team, only one will get you the team's emoji. So Eagles fans, for instance, won't get an emoji if they use just #Eagles, and Broncos fans won't see one if they use a hashtag like #BroncosCountry — so if you want in on the fun, be sure to look up your team's hashtag.

But on the bright side, use of each emoji is free and easy, and a fun way to spice up your support on Twitter. You can find your team's hashtag from the list below:

As you can see, not every hashtag is straightforward. For instance, the Colts' is #ForTheShoe; the Vikings are #Skol; and the Buccaneers are #SiegeTheDay. It's enough to make all the teams whose hashtag is just their boring old team name jealous.

Though I have to say, #SiegeTheDay, while awesome, does seem a little unfair; Tampa Bay fans already had to try to remember how many "c"s in "buccaneer," and now they have to get the "ie" combination right in "siege"?

(Worth noting: The hashtags won't display in embedded tweets, so you'll notice that they're conspicuously absent in the tweets below. However, if you click through to view the tweets on Twitter itself, you'll seem them bright as proverbial day.)

It also seems like some of the hashtags, like the Steelers' hashtag #HereWeGo, might attract some unsuspecting non-football fans as well, who may be confused to see an unexpected emoji showing up in their tweets.

And the Falcons actually have some potential musical theater-related confusion going on.

But I'm willing to bet that even football teams won't want to get into a Twitter war with the musical Hamilton. If the Tony Awards taught us anything this year, it's that Hamilton defeats all.

Overall, though, both teams and fans are clearly having fun with the new emojis. Check it out.

So what are you waiting for, football fans? Get on Twitter and show your emoji-laden pride!