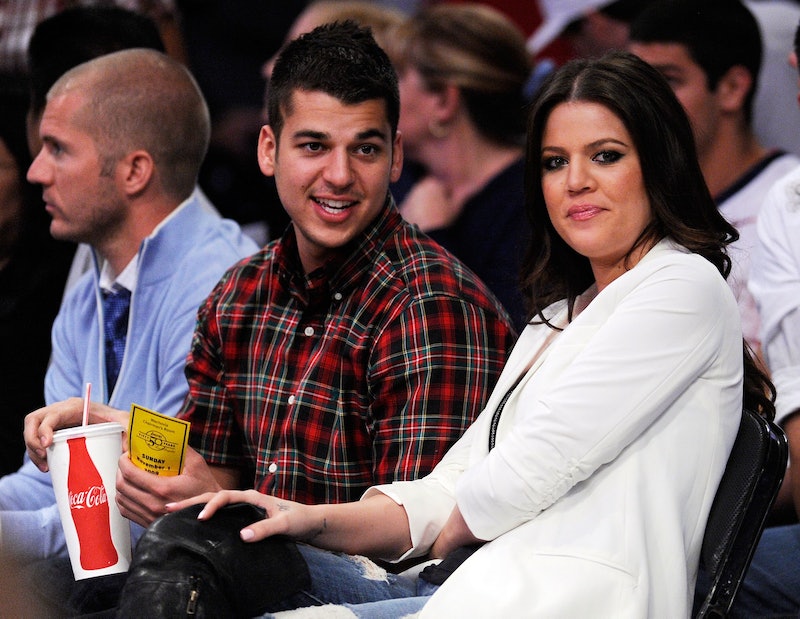 The dynamic between the various Kardashians changes depending on the day, which is certainly true for the two youngest Kardashian siblings, Rob and Khloe. Though Rob and Khloe were once extremely close — so close that Khloe allowed Rob to live in her home for years — lately, they haven't been as tight. Rob's relationship with model Blac Chyna (an ex of Kylie Jenner's boyfriend Tyga and the mother of Tyga's son) has caused a riff between him and Khloe, and with Rob's new relationship-centric reality show Rob & Chyna, one pair fans are wondering about is that between Rob and his older sister. What's the status of Khloe and Rob's relationship?

If you watched Keeping Up With The Kardashians, you know that while things aren't exactly back to normal, they are getting a lot better between Rob and Khloe. On the Aug. 28 episode "Blood, Sweat, And Fears," the feuding siblings gave each other a big hug after Momager Kris Jenner encouraged Rob to make things right with the woman who has always had his back. Though this sibling reunion happened in August on E!'s long-running reality show, according to Us Weekly, Rob and Khloe actually made up in April, and that Khloe softened towards Rob after learning that Chyna was pregnant with Rob's first child. Given that Khloe is already a kickass auntie to Kourtney and Kim's kids, it makes sense that she would want to mend things with Rob before he had a baby of his own.

New episodes of Keeping Up With The Kardashians suggest that Rob and Khloe are only getting closer and closer. On the Sept. 4 episode, Khloe helped Rob repair things with his fiancée Chyna following a fight, something that, mere months ago, Khloe likely would have rolled her eyes at. It also wasn't long ago when an angry Khloe refused to help Rob move into his house, or allow her own personal assistants to come over and help Rob move some boxes. Khloe's tune is changing, made evident by the fact that Khloe made sure to include Chyna in her birthday plans.

It will likely take a while for Khloe and Rob to get back to a place where they can put any and all animosity behind them, but this family is definitely on the right track.

More like this
Cherie & Jessey's Relationship Timeline Is As Complicated As It Seems On 'Bling Empire'
By Brad Witter
Everything We Know About Chèrie & Jessey’s Abrupt Exit From Bling Empire
By Alyssa Lapid
Scott Disick’s First Time Around Kravis Was “Awkward,” To Say The Least
By Jake Viswanath
Kim Kardashian Joked That Her Wedding To Kris Humphries Was A “Gay Wedding”
By Jake Viswanath
Get Even More From Bustle — Sign Up For The Newsletter