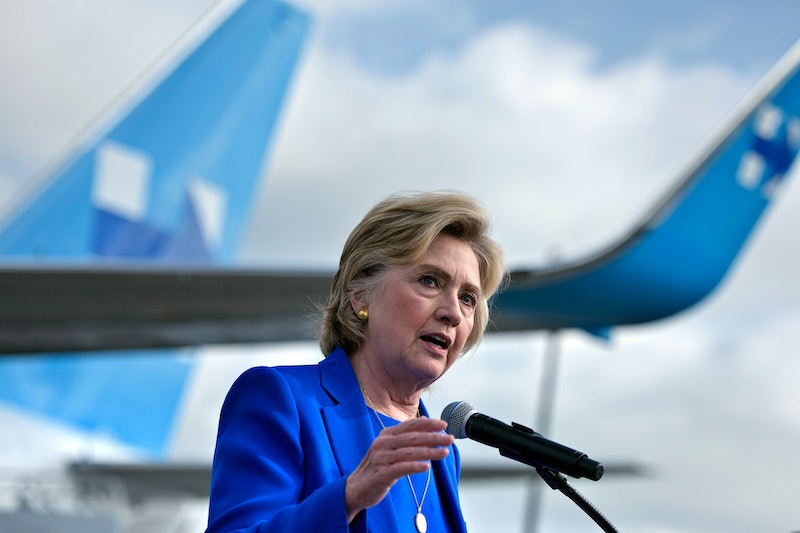 While she may get a bad rep for pandering to millennials, Hillary Clinton has certainly put herself out there in some pretty cool ways to reach voters. The presidential candidate collaborated with another popular online brand on Thursday when Humans of New York featured Clinton in their newest post. The post shows Clinton sitting down in what looks like some type of hotel room, in the midst of speaking. We can assume that the photo wasn't quite as off the cuff as typical HONY posts, which tend to capture people out on the street, or elsewhere in public, considering Clinton is such a high-profile person, the fact that she agreed to participate makes up for any lack of spontaneity.

While it's a cool moment for pop culture, the presidential candidate brings up a serious issue in the story she shares. Clinton is often perceived as cold, or private, but the reasons behind keeping this wall up date back to when she was a college student and fought to have a place in the world of academics and law as a woman. As an undergraduate student, Clinton attended Wellesley College, which is a women's liberal-arts school. As a well-educated, young progressive, you can only imagine the challenges she faced after leaving the comforts of a liberal campus and going out into the world to make a difference. Said Clinton:

I was taking a law school admissions test in a big classroom at Harvard. My friend and I were some of the only women in the room. I was feeling nervous. I was a senior in college. I wasn’t sure how well I’d do. And while we’re waiting for the exam to start, a group of men began to yell things like: "You don’t need to be here." And "There’s plenty else you can do." It turned into a real "pile on." One of them even said: "If you take my spot, I’ll get drafted, and I’ll go to Vietnam, and I'll die." And they weren’t kidding around. It was intense. It got very personal. But I couldn’t respond. I couldn’t afford to get distracted because I didn’t want to mess up the test. So I just kept looking down, hoping that the proctor would walk in the room. I know that I can be perceived as aloof or cold or unemotional. But I had to learn as a young woman to control my emotions. And that’s a hard path to walk. Because you need to protect yourself, you need to keep steady, but at the same time you don’t want to seem "walled off." And sometimes I think I come across more in the "walled off" arena. And if I create that perception, then I take responsibility. I don’t view myself as cold or unemotional. And neither do my friends. And neither does my family. But if that sometimes is the perception I create, then I can’t blame people for thinking that.

In 1965, current Supreme Court justice Ruth Bader Ginsburg was among nine women in law school at Harvard. Famously, she was at a dinner with Erwin Griswold, dean of Harvard Law School, when he posed a question to the women in attendance: How did they justify taking a spot that would otherwise have gone to a man? Much like Ginsburg, Clinton has faced men throughout her life who were angry about the possibility that she might take "their" place.

Clinton speaking about the issue that women who are considered cold face when they don't prescribe to men's expectations of warmth and comfort is an important topic to bring up, especially in this election cycle. Considering her opponent, Donald Trump, has said some pretty terrible things about women in the past, the fact that Clinton is sticking up for women is just one more reason to get behind her. According to a recent Real Clear Politics Poll, nearly 60 percent of voters find Clinton unfavorable. Perhaps her perceived coldness has attributed to this view. While she concedes in her HONY post that "if that sometime is the perception I create, then I can't blame people for thinking that," it's a shame that her past experiences with sexism may be at least partly to blame for the nation's perception of her now.

Let's hope for more fun surprises from the Clinton campaign in the months ahead before the election. We sure could use some enjoyable pop culture moments during this somewhat depressing election cycle.