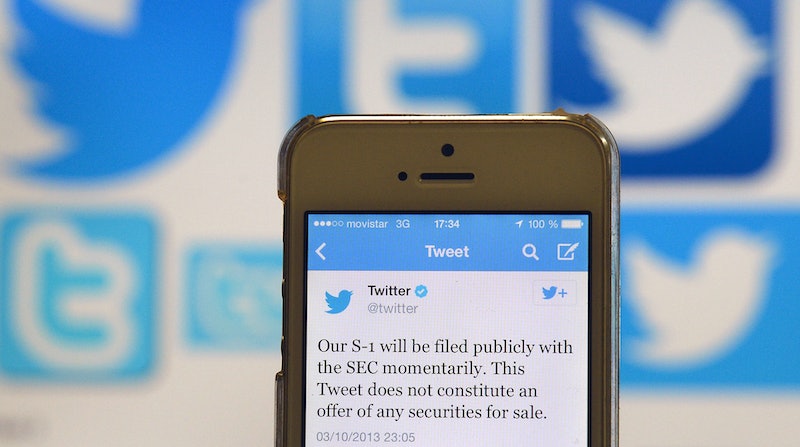 When Twitter announced on Thursday via (what else?) its Twitter account that DMs were getting some shiny new features, the thought that immediately came to mind for me was a very, very specific one: Can anyone inform me how to tell if you have the Twitter Direct Message update? I mean, yes, the new features are pretty cool-sounding... but when will they be mine? As it turns out, it’s a little bit of a struggle to figure out, but with perseverance, it can be done. I know, because I’ve done it. For science. You're welcome.

As we saw in the nifty little video Twitter posted, the new DM features are threefold: They include read receipts, the typing indicator, and media rich web link previews. This means that you'll be able to tell when someone has read a message you've sent and when they're typing, as well as check out what's actually at a web link someone has sent you before you click or tap on it. According to Twitter in a statement provided to Bustle via email, all three features will be available on both Android and iOS on mobile, while Twitter DMs on the web will only see the addition of web link previews. The update will be rolling out to all users in the coming days.

So, back to the main question: How can you tell if you have the update? Well, there are two ways to do it, and odds are, you’ll have to use them both in tandem with each other to solve the puzzle.

First, though, check out those new features in action:

Cool, right? Now here’s how to see if you have them yet:

1. Make Sure You Have The Latest Version Of The App Installed

According to Twitter, users will need to have the latest version of Twitter installed on their mobile devices in order to use the new features. On iOS, that’s version 6.61.1, which is dated Sept. 7, 2016; on Android, the version “varies with device,” according to the Google Play store, but is dated Sept. 6, 2016.

To check the version you have, go into “Settings,” then “About Twitter.” As you can see above, I have version 6.61.1 installed on my iPhone.

Since the update is getting rolled out gradually, though, just having the latest version installed doesn’t necessarily mean you’ll have access to the features immediately. So, it’s time to give a little trial and error a shot and see what happens when you actually try to use said features.

I enlisted Bustle’s trusty Web Culture Editor, Emma Lord, for the experiment, sending her an extremely boring test DM as seen here. I was, alas, looking at my computer screen when she started typing her reply, so I missed the period of time in which the typing indicator would have appeared, had I had it — but double alas, when I asked her to type again, I saw nothing. Both Emma and I continued to see nothing as we tested it out a few more times, causing us both to arrive at the conclusion that we did not have the update yet. (Note, too, the lack of read receipts.)

But hey, with luck, we’ll only have to wait a couple of days, max. So get tweeting, Tweeple!